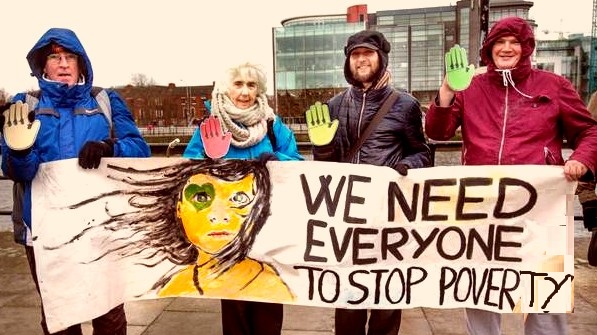 On 12 February, ATD Fourth World Ireland, along with many other countries around the world, held launch events for the global Stop Poverty campaign.

The day began with the symbolic launch of the Stop Poverty call to action. At the Human Rights and Poverty Stone at Custom House Quay in Dublin, a ceremony took place calling on people to demonstrate their support. At this site of yearly ceremonies to mark the World Day for Overcoming Poverty, ATD Fourth World urged giving symbolic support to people in poverty by signing the online call to action.

Among the hundreds of people who have already signed the call to action are the Northern-Irish Nobel Prize winner Mairead Maguire and several other well-known Irish social justice activists:

In attendance at the Custom House Quay ceremony were Maureen O’Sullivan, member of the Irish Parliament where she serves as Vice-Chair of the Foreign Affairs Committee as well as Hugh Frazer, first director of the Irish Combat Poverty Agency and currently a leading European expert on social policy.

Following the ceremony, a group of activists and supporters gathered at the ATD Fourth World office in Dublin to watch a 1987 video interview with Joseph Wresinski, founder of ATD Fourth World. The Stop Poverty campaign launch coincides with the centenary of the birth of Joseph Wresinski (1917-1988), the inspirational figure behind the development of the 2012 UN Guiding Principles on Human Rights and Extreme Poverty. Born himself in a disadvantaged and marginalized community, Wresinski dedicated his life to advocating for people living in extreme poverty.

The video led to a lively discussion during which ATD Fourth World activists talked about their own experiences of poverty. Watching Wresinski talk proudly about his mother’s struggles and the way he was treated at school as a child helped people feel comfortable describing some of the things they have gone through and how their lives have changed for the better.

One central element of the Stop-Poverty campaign is the collection of “Stories of Change” that show poverty is not inevitable if people work together and support one another.

The day concluded with a program at Saint Francis Xavier Church. Father Peter McVerry SJ, who has been active in the struggle against homelessness in Ireland for decades, led a mass in honor of Joseph Wresinski. He described how Wresinski understood that people in poverty want to feel that others are not looking down on them. More than handouts, they need to know that people in their neighborhoods, workplaces, schools, etc. believe in them and are ready to be supportive. After a reading of Wresinski’s famous address on the occasion of the first World Day for Overcoming Poverty, members of the audience wrote on a card the name of a person experiencing poverty who was in their thoughts. One by one, people brought these cards forward and placed them at the foot of the alter. In attendance at the evening program were representatives of the Polish, Spanish, and French embassies in honor of Wresinski’s Polish Mother, Spanish Father, and French siblings: Mr Lionel Paradisi-Coulouma, First Advisor of the French Ambassador; Ms Katarzyna Smoter, Consul at the Polish Embassy; and Mr Carlos Lucini, Counsellor of the Spanish Embassy.

Choral concerts held around the world are a central element of the Stop Poverty campaign. During the evening program, the Gardiner Street Gospel Choir performed one of the first of these concerts. Particularly striking was their version of “Man in the Mirror,” a song by Michael Jackson that reminds everyone of the choices they make every day, and the opportunity each day brings “to make the world a better place”:

I see kids in the street, with not enough to eat

Who am I to be blind?  Pretending not to see their needs…

I’m starting with the man in the mirror

I’m asking him to change his ways

If you want to make the world a better place

Take a look at yourself and make a change