Skip to content
Home > European Institutions > Leaving No One Behind: ATD Fourth World Members Talk Policy With the European Union

Leaving No One Behind: ATD Fourth World Members Talk Policy With the European Union 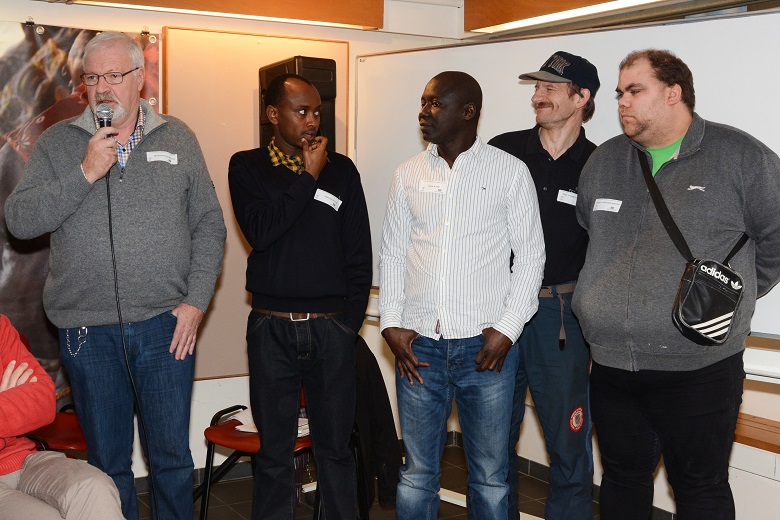 The December, 2016 Plenary Session of the European Fourth World People’s University took place at the European Economic and Social Committee (EESC) in Brussels. Members of the Committee met with people from across Europe who live in poverty. This unusual session was not just an opportunity for people with difficult lives to describe the hardships they face. Rather, it was the occasion for ATD members to talk about the ways national poverty-related policies can be ineffective, and to present suggestions for reforms.

The meeting brought together representatives of three sectors:

The December meeting was a Europe-wide People’s University focused on two issues of great importance to people living in poverty there: the right to legal status and the right to a decent income. The 2014 European People’s University had addressed these issues and resulted in a document titled “Working Together to Design and Build a Europe Without Poverty and Exclusion”.

ATD Fourth World members had prepared thoughtfully in their home country People’s University sessions. The personal experiences they brought to the December meeting demonstrated that people living in poverty are not treated as equal citizens when it comes to basic rights. The ATD members presented to the EESC suggestions about how to improve equality and access to rights.

The Right to a Legal Status

“We call upon the European Union to guarantee the right to legal existence to all persons living on its territory.”

“It is not me hiding. It is the others hiding me.”

Many people in Europe have no recognized legal status, even though article 16 of the International Covenant on Civil and Political Rights states the right to be recognized as a person before the law. Without legal status, it is very difficult, if not impossible, to access other rights such as work, health, housing, the right to vote, etc.

This situation is not reflected in official statistics, which do not include people with no legal status such as migrants, asylum seekers, and EU citizens living in other EU countries (notably Romas). Some of these people have been removed from civil registries or were never listed in the first place. People who live on the street or in homeless camps simply do not exist for their own country. Many different reasons account for this non-existence from an administrative perspective. But for the people experiencing this situation on a day-to-day basis, often for years, it means a life of constant insecurity.

Participants described what it is like to be a “ghost citizen” of Europe. Living without papers or official status has a number of consequences in terms of access to rights:

“Your mental health suffers in all these long and uncertain procedures.”

“It took 13 months for one person who already had European citizenship to get a national insurance number in the United Kingdom. Without this number you can’t work or have a bank account.”

A man from the Netherlands felt a kind of violence in not being recognized by others.

“I had a job,” he said, “but I was not listed in the Basic Register of Persons (BRP) anymore. My boss discovered this and fired me. Social services told me, ‘You don’t exist’.”

In Spain, the community registry has refused to include citizens in poor housing situations. In the South-East of Europe, generations of people have no birth certificate because they can’t give birth at a hospital. However, it is the hospital maternity services that provide birth certificates, which are often required for access to other rights. Other people have been deleted from registers as a result of recent wars.

Following accounts of these widespread but often unrecognised issues, the group then discussed how these problem might be addressed at the national or European level. One suggestion was to hold institutions responsible for accomplishing administrative procedures in the time required. If a decision has not been made by the official deadline, then the ruling in question should be made in favour of the person waiting. In addition, it is important to increase funding so that decisions can be made in the time required.

Another solution would involve all the EU countries ratifying the revised European Social Charter and the protocol of collective complaints. This would extend provisions that already exist in the European Social Charter, which has been ratified by all EU countries. The Charter establishes the obligations of States with respect to fundamental rights such as work, health, and education. Some of these rights must be applied to people in irregular or undocumented situations.

“We call upon the European Union to establish a directive on the means required to live a decent life for each individual, which includes a decent minimum income in all of the member countries and which takes housing costs into account.”

“It is hard to always say no to your children because you have no money after paying all your bills.”

Many people in Europe live in constant fear that they will run out of money to feed their children before the end of the month. They also say, “housing costs us a fortune. We are absolutely not making it”.

In many countries with high unemployment and very few job opportunities, a “minimum income” allowance provides people a basic level of survival. Most European countries provide this benefit; however Greece and Italy do not. In the absence of such a minimum income, life is almost impossible. ATD members gave the example of an Italian woman struggling to survive:

“C. lives in Italy with no source of income. This has been harmful to her health. She depends on jobs that are unreliable and undeclared. She eats in soup kitchens. Italy does not provide help for such people. In some cities, people receive a purchasing card credited with only 80 euros a month…”

ATD members explained that in countries that do provide a minimum income benefit, the amount is often insufficient. “I have health issues,” explained one attendee, “and after I pay all my medical expenses and rent, I only have 50 Euros [about $53] a month.” In addition, many citizens do not receive the minimum income benefit at all. Information about it is often not available to people who live in very difficult circumstances. And even if they know about the benefit, the application process is very complicated. In addition, some benefits have conditions that exclude certain people.

Another issue cited is that an individual’s benefit depends on whether the person lives alone or as part of a household. This is the case in Belgium, and many European countries. One person explained the unintended consequence of this policy:

“When my daughter found a job, they reduced my income benefit and housing subsidy. They said we were “a couple” because she was making money and we were living together. My daughter left home so that I would not lose money but that is not what we wanted. They should not be looking at my daughter’s income for my support; she is just starting in life.”

Several attendees reminded the group that people desperately want to be able to work to support themselves.

“A minimum benefit is necessary, but I want to earn my income. The number of people working but still living in poverty is growing in Europe. If people aren’t paid a decent wage they can’t live in decent conditions.”

Participants at the European Forth World People’s University developed the following suggestions to improve minimum income benefits so they provide a decent life for all European citizens.

The EESC concluded the meeting by assuring its support for the suggestions proposed during the discussion. “Thank you for this interesting and helpful discussion. I learned a lot”, said one EESC representative. “Please continue to send us information that will help us address these issues.”

For a summary of the 2014 ATD Fourth World Proposals, click here.