The 19th and 20th December 2016, representatives of the International Movement ATD Fourth World coming from Belgium, Spain, France, Great Britain, and the Netherlands, will meet in the European Economic and Social Committee, in Brussels.

Participants, including those who live in poverty will take part in a dialogue, along with other people, to reflect on how to build a Europe without poverty and social exclusion. In a context where the European Union still feels the impact of receiving a massive number of refugees, where Great Britain prepares to leave the Union after the Brexit referendum, and where the economic recovery stagnates, it is important to ensure that poverty and social exclusion do not become secondary issues. We should remember that the founders of the European Union had as the essential objective of their efforts the constant improvements of the living and working conditions of their people*. By committing at a European level so that no one is left behind, we will make those founding values relevant again, and strengthen the purpose of the European project.

Guaranteeing everyone the means required to live a decent life

In a Europe where there are countries that are already testing small-scale basic income schemes, while others do not even have a minimum income system, what is the best way to achieve the guarantee to the means required to live a decent life? This is one of the topics we are going to address in the next edition of the European Fourth World People’s University.

The right to legal existence

The recent wave of refugees arriving in Europe seriously raises the question of the right to legal existence on European soil. What happens with those who are not able to obtain proper papers, or who lose their legal status? We should also remember that there are citizens of Member States that find themselves in a legal blank space given that they lack basic documents or a legal status that gives them access to fundamental rights (such as the right to vote, the right to housing, the right to work, the right to health care, etc.). This lack of legal status is affecting a large number of migrants, asylum seekers, travelers, homeless people, who are considered illegal residents in their own countries! During the European Fourth World People’s University, we are going to discuss how the European Union and the Member States can better ensure the access to a legal status for every person present on the territory.

Participation by invitation only. For more information, please contact the Delegation to the European Union:
By email
By phone +32-2-650.08.90 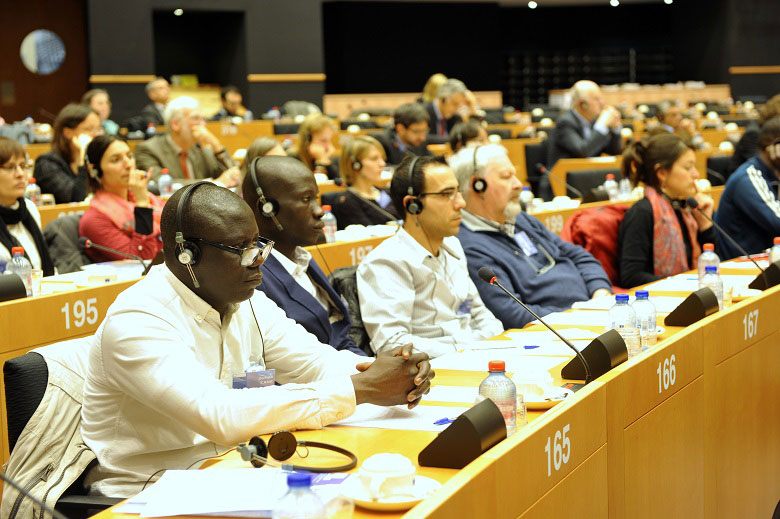 The guarantee of a decent minimum income is a necessary part of a basic social security system, in a context where the persistent lack of housing, jobs, or income, prevent people from assuming their family, social, and professional responsibilities. Most European countries already have minimum income schemes, which can be requested as a last resort and providing that age, residence, and active job search conditions, etc., are complied with. For many people the minimum income amounts are too low, and the access conditions problematic. In addition, these amounts differ a lot among countries, and almost everywhere the level of minimum income is below 50% of the median income.

The European Fourth World People’s University is the place where people living in poverty and other citizens and political players can dialogue and exchange ideas. Everyone comes to share knowledge and experiences, and to learn from each other. New ideas, based on the participants’ diversity, are born during these exchanges, and become essential to contribute to a more democratic society. In other words, it is about building the European project with the citizens living in poverty, and not just for them.

Download the pdf presentation of the European People’s University 2016.