Teens Build Homes and Community in Democratic Republic of Congo 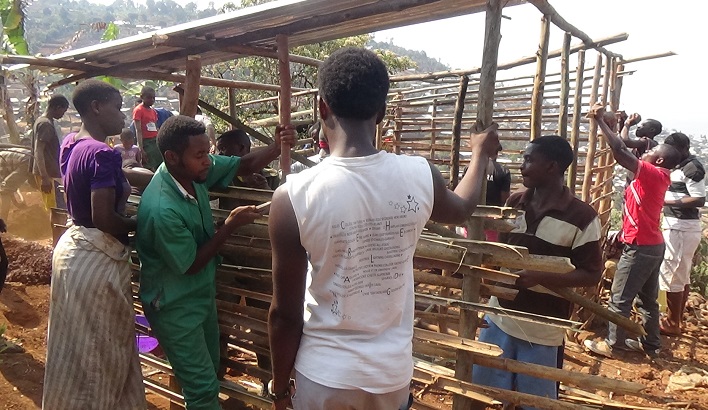 “Friendship and teamwork get people back on their feet.” In the Democratic Republic of Congo (DRC), this idea is just as important for ATD Fourth World as its concrete projects. In Bukavu, a city in the eastern part of the country, young people involved with ATD take this notion very seriously. Their resources and energy, as well as their teamwork and determination, all come together to accomplish construction projects that build new buildings and solidarity in their community.

Last August, thirty teenagers from three different neighbourhoods (Muhungu, Kadutu et Burhiba) worked together to rebuild the home of an elderly woman and her family. The house was located on a hill far from the centre of town and could only be reached by foot. It’s a long walk.

One of the teenagers noted how isolated the family was and how daunting the entire project looked.

“We came from different neighbourhoods to take down and rebuild this family’s house. They have neighbours, but they seem cut off from the community and things are pretty unstable for them. The job was so big it looked impossible! But then I remembered how we say that ‘Friendship and teamwork get people back on their feet.’”

As usual, the teenagers left no stone unturned looking for materials to use and tools to borrow. They even paid for some of the sheet metal themselves. Throughout the day they took turns getting water to make mortar by going down a long hill to the river. Others took nails out of the old roof, banging them straight to be used again.

Building the house was a huge job and several of the young people doubted whether they could really finish. René, one of the organizers, urged them to think about why they had wanted to take on the project. “Because it is so unfair the way this family has to live – its unbearable”, they said. René reminded them that it would also be unfair to leave the job unfinished. “The family would have nowhere to sleep. If we don’t finish the house, we will have increased their suffering instead of easing their pain.” Keeping this in mind motivated the teens to keep working until the house was finally finished that evening. They also recalled an idea from their training session about Joseph Wresinski, founder of ATD Fourth World, who once said, “You can’t help the poor one day and forget about them the next.”

The young people escorted each member of the family back to their new home. They watched happily as the old woman danced with her daughter, both overjoyed to be able to sleep that night in their new home. Her older children talked about the youngest who suffers from malaria. “At least tonight, she won’t be shivering or getting bitten by mosquitoes.” Fanuel, one of the teens, later noted that the mother had thanked them, saying,

“If every teenager followed your example, there would be no more suffering.”

When they reflected on the construction project, the young people made the connection between this work and their other goals such as “Become a friend to people who don’t have one” and “Change attitudes towards people living in poverty.” They realized that their work had made the family’s neighbours think twice. The neighbours had to ask themselves, Who are these young people? They came from so far away and worked so hard… What’s going on here? Where were we, the actual neighbours of this elderly woman? One of these neighbours had, in fact, spontaneously joined the teenagers, helping to replace the metal sheeting.

Faustin and Déo, elders who have worked with this group of young people for years, pointed out that projects like these are a good way to learn about the reality of extreme poverty. “When teens visit the home of a family who has nothing, they learn what real destitution is. When they go home, they talk with their parents.” Déo added,

“This sort of project is a good example of what ATD Fourth World is: everyone working together to reach a common goal.”

Building a new house for the elderly woman and her family shows how it doesn’t necessarily require enormous resources for a family to live in dignity. This group of determined young people is helping their entire community to see that a lot can be done with very little.