Extreme poverty as viewed through a human rights lens 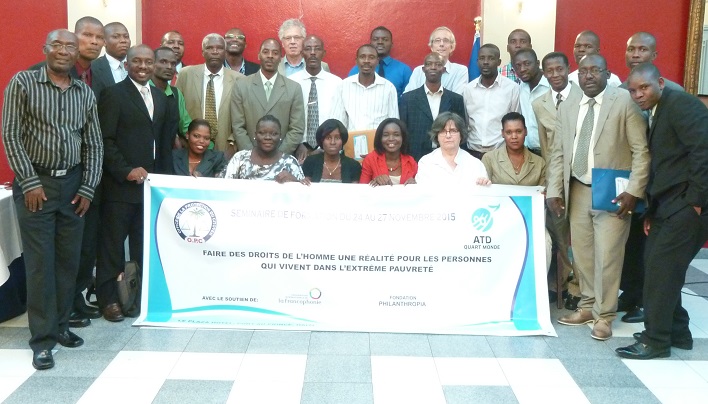 At the initiative of the Office for the Protection of the Citizen (OPC) and ATD Fourth World, representatives from civil society organizations and the news media participated in a seminar centered on the theme: ”Making Human Rights a Reality for People Living in Extreme Poverty.” It took place in Port-au-Prince, Haiti from 24 to 27 November 2015, thanks to the support of the International Organization of La Francophonie (OIF) and the Fondation Philantropia. The seminar used as its reference a Manual developed for putting into practice the Guiding Principles on Extreme Poverty and Human, adopted by the United Nations in 2012.

Putting into context the approach proposed by the Manual

The seminar alternated between plenary sessions and work in break-out groups that focused on such questions as “key principles for working with those who live in extreme poverty,” “the types of discrimination faced by those living in extreme poverty and their consequences,” and the ideas proposed in the Manual “to give those living in extreme poverty the means to claim their rights themselves.” Discussion of such topics was a new experience for most of the participants. One of the more important experiences was learning to appreciate the point of view of those who live in extreme poverty, and from there to find strategies for identifying and reaching out to those who are in the greatest difficulty, and to include them as active participants.

Participants in the seminar were invited to use specific examples taken from their own experience to answer questions like: “How does one create a relationship of confidence with those in extreme poverty who are affected by our actions?” “Are we putting them at risk by our actions? If so, what is acceptable? What are we putting in place to help limit those risks?” “How can we identify those who are extremely poor and who are usually hidden in society? What are typical problems in doing so, and how can these be overcome?”

The critical theme of free, active and enlightened participation of those living in great poverty was addressed the third day, as well as the principles of responsibility and accountability of government at the national level as well as through international mechanisms.

At the end of the seminar, the participants voiced this commitment: “Following this training seminar, we, the representatives of organizations from the print and broadcast news media, commit ourselves to the struggle to eliminate this scourge of extreme poverty that eats away at society. Many challenges such as illiteracy, cultural differences and stigmas, etc. await us, but through training and education we can help address these problems through social inclusion and by demanding that human rights be respected.”

A press conference echoed what came out of this seminar

On Friday, 27 November, a press conference took place in the presence of Dr. Ariel Henry, the Haitian Minister of Labor and Social Affairs, and numerous other officials. Two participants summarized the conclusions of the group, saying:

“The methodology used for the training was very efficient. At the end of this training, we participants affirm we are committed as one to ensure that human rights become a reality in our environment and that we protect as we each are able all those who live in situations of extreme poverty.

“We encourage the print and broadcast news media also to take into account the economic, social and cultural rights of all people and to act as agents in helping to achieve the reality of these rights.”
“People living in extreme poverty suffer not only from the lack of resources. They also face other obstacles such as those that deprive them of their fundamental rights to food, shelter, work, health, and education. Yet they are often forced to accept dangerous work conditions and to live in isolation.

“One of the results of this seminar, was to learn that poverty is not inevitable and that we are able each of us through our combined knowledge and efforts, as agents and actors to contribute to the eradication of the plague of poverty. We have learned to work for the emancipation of the poorest among us, those who are often out of sight, to assure they are neither stigmatized nor marginalized. By implementing the United Nations Guiding Principles on extreme poverty and human rights (nondiscrimination, participation, inclusion, responsibility, and respect for human dignity, etc.), human rights will become a reality.

“As long as there are human rights violations, poverty is not just a matter of one person nor a category of persons. Despite the fact someone is poor, no one should be allowed to discriminate against or stigmatize them in any way. Human rights are not to be seen as a favor but rather as a fundamental obligation of government to see that they are respected.”

Ms. Florence Elie, Protector of the Citizen, underscored that “this seminar comes as a crowning moment, but also as the most recent of many steps that have been taken before.” As to the future, she feels that “this closing day will serve as the point of departure for the new path that will be followed.” Ms. Elisabeth Beton, Deputy Ambassador of France to Haiti, noted the usefulness of experiences such as this in changing the status quo: “There is a strength that is being forged today, thanks to the ability to act and create coalitions, a strength that will grow and find its place even within the jurisdiction of the United Nations.” Mr. Thierry Viard, Executive Secretary of ATD Fourth World, emphasized the role that each person should play in society, beginning with those who are the poorest. The press conference had a significant impact in the country’s news media. Numerous news articles and reports were published and broadcast.

The OPC and ATD Fourth World hope to follow up on this seminar in order to encourage those who participated to pursue their fight against extreme poverty through making society more aware of human rights. Toward this end, the OPC committed to reconvening the participants in six months in order to monitor follow-up actions.

A half-day day workshop on this theme took place in Dublin this past December, another will take place in the Republic of Mauritius in May, and a four-day seminar was held in Senegal at the beginning of March. Perhaps there will be others to come.