Festival of Shared Talents in Sofia

Posted on 25 May 2021
This page is available in Български 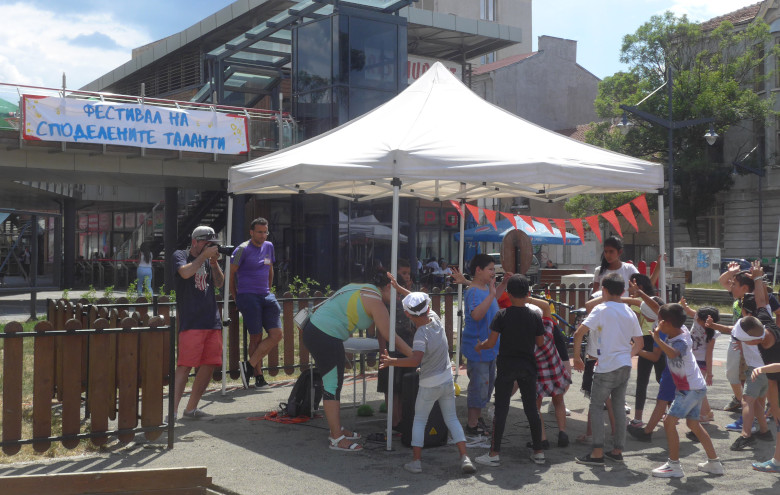 In June 2019 more than150 people participated in the Festival of Shared Talents held at Jenski Pazar (Women’s Market) in Sofia’s historic central market. The public garden there is often a place of celebration.

In the weeks before the festival, the preparation team went to the market regularly in order to personally invite people from the surrounding neighborhood.

Attending the Festival were children and parents who live near the Women’s Market and sometimes work there. Market vendors and their children also took part in the festivities. In addition, there were people who visit the market daily but who either have no home or live in very precarious situations. There were also people from other backgrounds who came to share with others something they know how to do.

“Everyone is talented” was the slogan of the weekend. The festival took place in a peaceful, family-friendly atmosphere where everyone could share their abilities and learn about new skills that others brought to the festival.

Festival participants discovered circus arts (acrobatics, unicycle, juggling), bracelet making, children’s skirts and capes made of recycled plastic, creating and playing on tic-tac-toe boards, and pottery. People could also do paintings inspired by guitar or trombone music, draw side by side with an artist, learn to dance with bolas or try out Serbian and hip hop dances, and interact with a rapper and a “Play-back Theater” troupe. There were also a variety of sports.

Iliyan explains in the video below:

Children got to be reporters, using digital cameras and film to document the event and produce videos of what happened during the day. At the end of the Festival, participants wanted to continue:

“When’s the next one?” asked one child.
One mother in the neighborhood said, “I am proud that there are people who take care of our children.”

A big thank you to everyone!

Organizing the Festival of Shared Talents allowed ATD Fourth World members to meet lots of new people. It was particularly important to reach out to those who might not have stopped by without an invitation.

The Festival of Shared Talents was made possible by the work of the Pavilion 19 team (Red House Sofia project) and the ATD Fourth World team in Sofia. The festival could not have been such a success without the support of Solidarity Club Sofia, the Hrankoop Cooperative/Farmers Market, the MiniArt Foundation, and the High Level Academy.
A big thank you to everyone!