Skip to content
Home > Latin America and the Caribbean > Peru > Field Library in Peru: Going the extra mile to include everyone

Field Library in Peru: Going the extra mile to include everyone 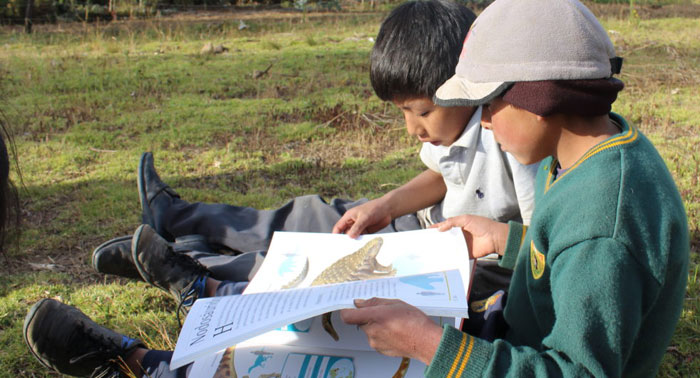 Awakening children’s eagerness and determination to learn is the goal of ATD’s “Field Library” in Peru. Activities open doors to different perspectives on life and experiences of the world. Like all Street Libraries, the “Field Library” gathers people together through words, thinking, and creativity.

Every week in Cuyo Grande, Pisaq, a team of volunteers from ATD Fourth World gets ready for the Field Library. They select books carefully, imagining children’s reactions to each story and hoping to surprise and interest young readers.

The volunteers go out of their way to include everyone. As they walk around the community, they look out for people who wouldn’t normally venture over, approaching those who are lonely or excluded because of the poverty they suffer. Besides the stories and pictures in their backpacks, these volunteers carry with them a strong devotion. As soon as children spot them, they leave their houses, as if following the call of books. The shy ones sometimes hesitate behind their doors, feet fidgeting and eyes shining, before joining the group where facilitators gather everyone together with love and joy.

One of the facilitators named Edith sees a girl behind a wall. Gesturing with her hand, Edith says, “Haku, mana qanwanqa manan qallarinmanchu!” (“Come on, the library can’t begin without you!”) The girl, whose name is Lucia, shyly takes Edith’s hand and comes over. That afternoon, thanks to the books, the kids are all invited to dream.

On the grass, nestled on a beautiful cliff of the sacred Andes, the Field Library is a feast of words and knowledge where everyone, without exception, is welcome. The children in this region are bilingual. Their voices ring out with Quechua, “the language of the people”, and Castilian, “the language of past conquest”, but also tomorrow’s tool for communicating across cultures.

During the library, Quechua is the language that invites, gathers people together and expresses what they want to say. The vast majority of books are in Spanish. However, Edith uses Quechua when she suggests the children look at them. They read together in Spanish, interspersed with dialogue in Quechua. If someone asks a question or makes a comment, they are free to do so in the language they choose. It should be natural to live between two languages. Both are cultural vehicles, born through the need to express and communicate ideas to others.

It seems terribly unjust that children and adults might go through life without ever being able to read or savour beautiful and skilled writing. Equally unjust is never having the chance to express one’s tastes and preferences. As with food, children have to try everything. If they don’t like something, it doesn’t matter. Most important is having the chance to encounter new things and make choices for oneself.

Like ATD’s Street Libraries, the Peru Field Library helps people think about things together and be creative. Children, parents and facilitators give the best of themselves because they know they are building a living culture.

More information on Street Libraries around the world.