Finding Compassion in an Unexpected Place 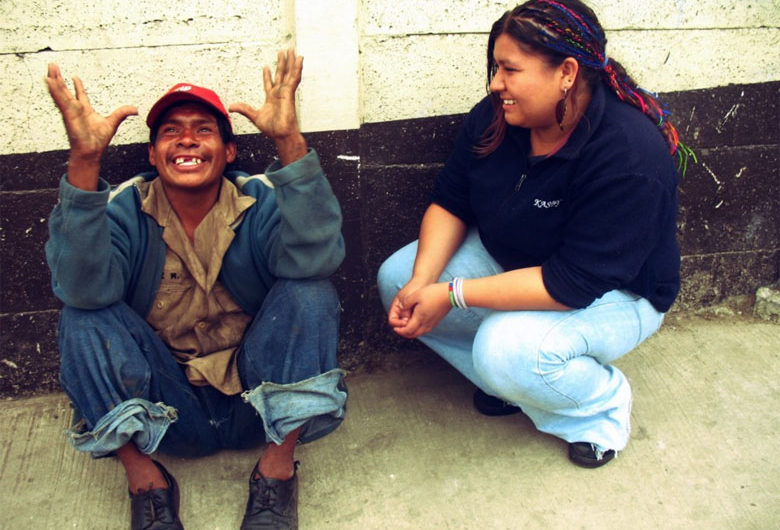 In 2017, ATD Fourth World invited people around the world to document real-life “Stories of Change” arising from situations of injustice and exclusion caused by extreme poverty. These stories, from activists, community leaders, and others, show that when people work together, real change can happen. For more “Stories of Change” click here.

In spite of the drugs, the suffering, and the degradation of life on the streets near the garbage dump, people hold onto their humanity.

We met Armando in Zone 3 during one of the weekly art workshops that ATD Fourth World Guatemala organises in the capital city. The workshops provide a space for the participants — the people who live on the streets around the Guatemala City landfill — to share moments of peace, to embrace creativity, and to talk to each other.

Years ago, Armando was an evangelical pastor; everyone called him “the Pastor”. When he was clearheaded, it was really great to talk to him. He liked to know what we thought about life and death. He told us about the dangers on the streets, and how exhausting it was just trying to survive. But he also told us about his friends and how they supported each other. He shared his dreams with us and, in turn, asked us about ours. Armando tried several times to free himself from the process of self-destruction, a result of his addiction to drugs. After many attempts and failures, one day he finally was able to stop taking drugs and get off the streets.

A couple years later, Armando became the manager of one of the rehabilitation centres in the capital. Soon after, he returned to visit the people of Zone 3 where he had lived for so many years. When another man we knew, Oscar Daniel, recovered from an accident that left him almost paralysed, we couldn’t find anyone to take care of him. Drugs and years of life on the streets had almost destroyed him.

“The Pastor” was the only one willing to take Oscar Daniel in at his rehabilitation centre. Armando offered him a chance to experience another way of life. Oscar could contribute to the organisation and escape the beatings and abuse of his previous life. We’d heard many times that Oscar Daniel would never survive on the streets. We’d all believed it at least once, having seen what bad shape he was in. But “the Pastor” made it possible for him to leave the streets, to be able to live life to the fullest again.

Despite the drugs, the suffering and humiliation of life on the streets around the landfill, the people living there manage to preserve their compassion, which is deeply rooted in their souls, protected in a way.

Compassion is a gift, a source of hope. Even though you often feel that life never changes and nothing you do works, being there for someone and nurturing these relationships is significant. Sometimes it motivates us even more than creating change.

We are convinced that every person is a gift to be discovered and we will not abandon anyone out of indifference. We won’t lose the opportunity to get to know these people. We need to appreciate them. It allows us to find and connect with the humanity that resides within everyone – regardless of economic status. Now that we’re part of their everyday lives, we’ve been able to show them we care. Moreover, we’ve been able to show them that they can count on us even though we’re not always around and can’t stop the misfortunes that come their way.

Mynor explains it this way:

“Taking a closer look at my life on the streets, what weighed me down or affected me the most was the discrimination I faced for being homeless. (…)

“I feel that inside everyone, whatever the situation, there is a stronger force that can’t be seen… What I needed was someone to listen to me. Most of all, it was about communication. The need to be able to communicate! I’m so happy there are people like that, willing to listen to you selflessly. It was important for me.

“Now I feel I can listen to others. In fact, since I started studying, I’m determined to become a psychologist.”

When we say that there’s humanity inside people, it’s not just something spiritual or abstract. What we deeply believe and see to be true is that by embarking on a journey together, we witness these gestures and everyday attitudes towards others, including people who are not experiencing the hell that is life on the streets with drugs.

These experiences show us that bridges can be built between human beings from very different backgrounds and that relationships can be established between people with a roof over their heads and others that are homeless. Even if these encounters are difficult, a relationship is a gesture, a proposal to find ourselves, a conscious consideration towards these men and women.

When you live surrounded by garbage, there’s a desire to live nonetheless; that’s dignity. When you seek peace, despite having experienced so much violence, that’s dignity. And it’s because of this dignity that we all fit equally in the same world. As Paúl says, “No one is exempt from humanity.”