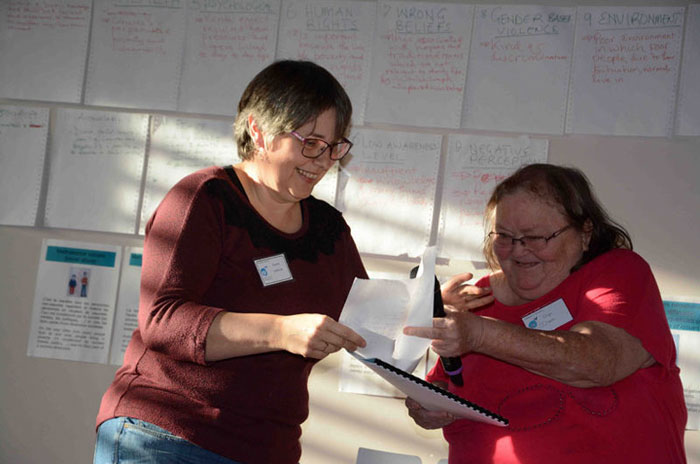 “Poverty in All Its Forms: Determining the Dimensions of Poverty and How to Measure Them” is an international participatory research project ATD Fourth World is conducting in six countries around the world. With the goal of including the perspective of people in poverty, the project is identifying new “dimensions” or aspects of poverty that are not currently included in traditional definitions. ATD teams in Bangladesh, Bolivia, France, Tanzania, the United Kingdom and the United States. are contributing to the project.

In late September, research team members from all these countries gathered for several days in France. Each national team is composed of three kinds of people: academic experts, practitioners (such as teachers and social workers), and people who have experienced poverty themselves. The September meetings focused on results of each country’s efforts to identify dimensions that include aspects derived from a first hand experience of poverty. The goal of the meetings was to clarify and fine-tune these dimensions with a view to changing the ways in which poverty is evaluated. Crucial to the research project has been the Merging Knowledge methodology. This is a way of working together as a group to arrive at results that combine the different kinds of expertise that people from different backgrounds bring to the table. In November 2017, when research participants met to discuss their preliminary results, they also evaluated how the Merging Knowledge method was working for them. They talked about their experiences using the process, difficulties they encountered, and suggestions for responding to the some of questions individual national research teams were grappling with.

Overall, participants reported that the early stages of their research had shown the Merging Knowledge process to be an effective way for people in poverty to engage in the team’s work on an equal footing with their co-researchers. The goal is for research team members who live in poverty not just to talk about their own experiences or those of people they know, but also to engage in the work of synthesizing and analyzing the information collected. The result of this Merging Knowledge process can be an uncommon breadth of understanding with regards to poverty.

“We had to work hard to create an atmosphere that allowed dialogue between people who have different kinds of insights: academic knowledge, practical expertise, and real life experiences.”

As discussions seeking to identify dimensions of poverty took place, it was critical for participants to meet in “peer groups” to think through their ideas before talking together. For example, groups of academics or of people who experience poverty first talked together on their own before joining the larger research team. This helped afford the same weight in the final results to each group’s unique understanding of poverty. Equally important was the atmosphere of respect in which people genuinely listened to each other’s ideas. Sometimes this meant allowing additional time to participants who had greater difficulty thinking through their contribution and then presenting their thoughts to the larger group. As the project nears completion, the recent September meeting was an occasion to review results from each of the six countries. The research teams worked together to identify dimensions that are similar in all of the countries, as well as those dimensions that are country specific. They also continued to discuss lessons learned through using the Merging Knowledge process which some were experiencing for the first time.

In addition to bringing together these national results, the September meeting provided a time for experts from public and private institutions, both national and international, to give feedback and recommendations to each of the research teams from individual countries. When these teams return home, they will finalize the dimensions they have identified. Each country will then submit contributions, which will be incorporated into the final international synthesis report on these new dimensions of poverty. The report is expected to be published in early 2019.