Forum Where Everyone Can Discuss Issues of Extreme Poverty 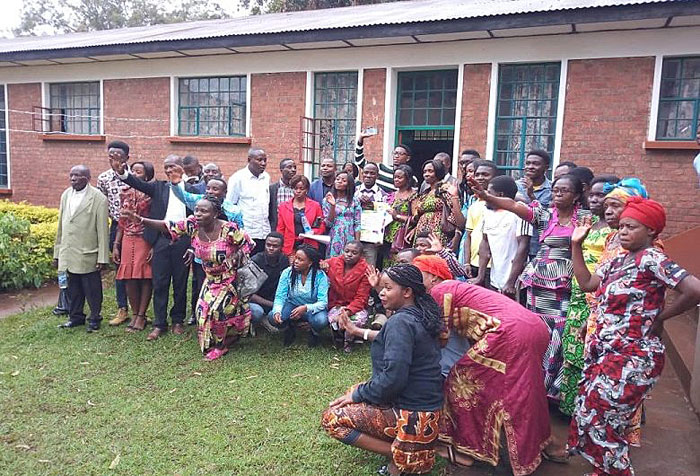 The Democratic Republic of the Congo (DRC) marked the International Day for the Eradication of Poverty on 17 October 2018 in several ways. There was a meeting between provincial deputies, as well as several radio and TV broadcasts.

ATD Fourth World’s event captured the spirit of the day in one of its “Conversations in Equality”. This event brought people living in extreme poverty together with lawyers, university professors, political figures, journalists, students, doctors, and teachers. “Conversations in Equality” is the term ATD in the DRC uses for a setting in which individuals can all give their opinions on a particular topic for discussion. The theme on 17 October was how to work together to end poverty.

“October 17th is a day to acknowledge the equal dignity of each individual. On this day, many people get together with others all over the world who live in the deepest poverty and are victims of many forms of violence.”

Pooling income so everyone can survive

ATD in the DRC wanted to commemorate the international day with people who experience isolation and exclusion in addition to poverty. Attending the gathering were porters with disabilities such as blindness or other physical impairments who have developed ties with ATD. Their work is transporting goods between the DRC and Rwanda, some using special bikes they can ride.

These porters have formed an association, helping one another to deal with poverty.

After work the porters get together to pool what they have earned during the day. Then they divide their earnings equally. This enables them all to live on what they earn each day, to feed their children and provide a good education. In addition, they manage to pay rent and provide health care for their families. Because of this collaborative effort, ATD invited the porters to discuss how they manage their daily struggles against poverty with other people who also suffer from its severe effects.

“They called me a dog and a sorcerer”

Papa Émile is part of a group of families that support one another through ATD in the DRC. He took the floor to talk about how Tapori children had helped him escape a life of isolation, rejection, and ridicule. Thanks to their support, he was able to resume his position in the community where he is now an active member.

“In the past, I went through a time when poverty really weighed on me”, Papa Émile explained. “People did not respect me. They scorned me; they called me a dog and a sorcerer. My house was terribly dilapidated. When it rained, we could not sleep. So we covered ourselves with some bags and spent the night outside standing up. Now I am an activist with ATD and today I am proud of the consideration you have given me.”

Théophile Bashimbe, a member of the disabled persons association, also spoke. “We ask our leaders to have consideration for porters with disabilities”, he said. “We want them to see what we are doing because we are also contributing to our county’s growth. In addition, we want to thank the ATD Volunteer Corps members for creating this forum for freedom and discussing ideas about creating a more just world.”

“Our society is discriminatory”, said a representative from Foyer E’Kabana, an organisation that supports children accused of witchcraft. “We shove aside the weakest school-age children because they are unable to pay their school fees. People accuse them of witchcraft. However, we want to build a world without discrimination and violence.”

Following these speeches, the group addressed the year’s theme for the International Day for the Eradication of Poverty: “Coming together with those furthest behind to build an inclusive world of universal respect for human rights and dignity.” Participants each had a turn to give their views on this theme.

A woman named Nathaliana said, “The cost of psychiatric care is high because we live in a sick society that suffers from discrimination and exclusion. When people experience exclusion they go mad. It’s not money or medications that we need but a more rational society that is both united and inclusive.”

A need for collaboration and realistic legislation

A participant named Gustavo Cheria stated, “I represent the Socio-cultural Commission of the Provincial Assembly of South Kivu. We seek to collaborate with the most economically disadvantaged people. As part of our effort to support people, the Assembly tries to make laws that don’t marginalize anyone. But in addition to the laws the Assembly has approved, it would be good to have legislation that reflects the reality of our daily lives.”

Bob Katembo concluded, “For me joining with people in deepest poverty means sharing my life with people that others have abandoned, and thinking with them about the concerns they have.”

ATD in Bukavu, a city in the Democratic Republic of Congo, hosts “Conversations in Equality” on a regular basis.

More information on ATD in RDC.