The Hidden Dimensions of Poverty: A New Framework for Action? 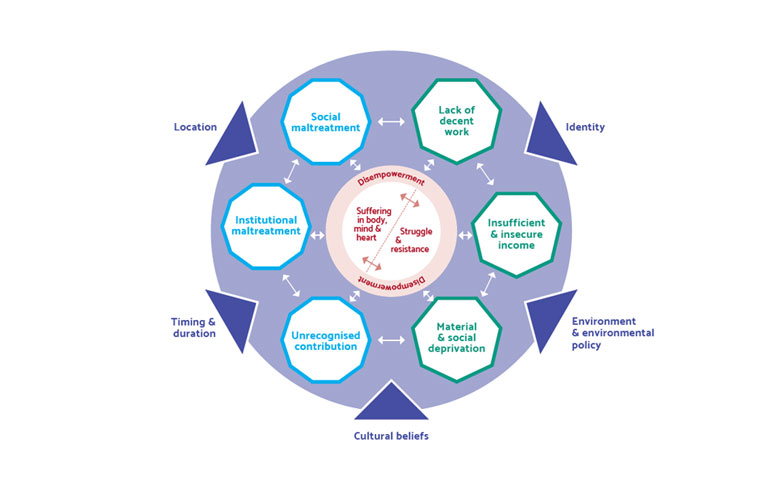 Above: Diagram from ATD Fourth World and Oxford University Dimensions of Poverty research.

Last January, the French Development Agency hosted an international webinar to discuss ATD Fourth World’s research project, conducted with Oxford University, on The Hidden Dimensions of Poverty. The webinar explored how the project’s unique method contributes to our understanding of poverty. In addition, discussion addressed how donors and development professionals can use the results in their work to overcome poverty world-wide.

Conducted in six countries, the Hidden Dimensions of Poverty project included people living in poverty as co-researchers who contributed their perspective to the question, “What is poverty?” While many studies of poverty look at hardships such as lack of income or poor diet, this focus on deprivation gives an incomplete picture. In fact, it often obscures how people experience poverty, as well as keys to its structural causes over time.

Using the Merging of Knowledge approach over a period of three years, people with a lived experience of poverty worked alongside academic researchers and professionals who work directly with people in poverty, such as teachers or social workers. These three groups collaborated to develop questions, collect data, and analyse results. In the end, the ATD/Oxford research identified nine interdependent characteristics common to countries in the global north and south.

With 426 attendees from 19 countries, the January webinar was an opportunity for academics, development experts, foundations, non-profits, and the private sector to comment on the project and discuss how it might lead to new research as well as to improved poverty reduction policies.

Among speakers, there was general agreement that the Hidden Dimensions project provided an innovative and insightful description of poverty. Some were particularly impressed with the investment of time necessary to engage people in extreme poverty as equals throughout the project. This paid off, participants noted, in the report’s account of little recognized aspects of poverty.

For example, elements such as “social and institutional mistreatment” or “unrecognised contributions” receive the same focus and attention as more traditional aspects such as insufficient resources or lack of housing.

Webinar speaker Sylvie Bukhari-de Pontual, President of the development non-profit CCFD Terre Solidaire, noted that the Hidden Dimensions of Poverty research documents two things her organization has seen for years. First, long-term relationships developed over time are critical. And second, the perspective of people in poverty is essential to addressing its many challenges. What many know anecdotally, Ms. Bukhari-de Pontual added, has finally been confirmed by more formal research.

François Bourguignon, Professor Emeritus at the Paris School of Economics and Director of Studies at Frances’s School for Advanced Studies in the Social Sciences, agreed. He described the research as a real “tour de force” in that it integrates so many aspects into a comprehensive whole, describing the complex interactions among multiple dimensions. The results, he said, are “a step forward in how we see poverty and the way we think about it.”

Even so, Professor Bourguignon pointed out, there are several ways that more quantitative measures of poverty can still be useful in the field of development. For example, they can detect the growth or decline of income disparities within a country over a particular time period, information that can be useful in shaping development conversations with governments. Nevertheless, Professor Bourguignon praised the report’s emphasis on the importance of aspects such as “social mistreatment” or “disempowerment” as key characteristics of poverty. We must recognise, he insisted, that overcoming material deprivations would still leave these significant characteristics of poverty unaddressed.

Building on the research

Webinar participants were eager to hear about putting the research to practical use. In fact, Dr Xavier Godinot of ATD explained, a number of efforts are already underway. For example, in late 2020, people in poverty took part in devising a French National Institute of Statistics and Economic Studies (NISES) questionnaire to gather information about institutional mistreatment, one of the key dimensions of poverty highlighted by the Hidden Dimensions research. ATD Fourth World will continue to work with the NISES in the future on other projects.

In Africa, a group of researchers and professors in several English-speaking countries is working to raise awareness of the Merging of Knowledge methodology in an academic context. Elsewhere, ATD Fourth World has created Merging of Knowledge training programs in collaboration with people in poverty. Apart from ATD’s own work, several education institutions in other countries have developed training programs that provide certification in this methodology.

Finally, Dr Godinot said, ATD Fourth World is collaborating with the United Nations Special Rapporteur on extreme poverty and human rights, Olivier De Schutter, on developing a framework for action based on the Hidden Dimensions research. According to De Schutter, current evaluation methods do not provide adequate opportunity for people in poverty to give their perspective on anti-poverty projects.

Another webinar speaker, Marie-Hélène Loison, Deputy Director General of the French Development Agency, commented that her organisation has already made a commitment to focus on “social connections”. This enables FDA to consider, in their funding decisions, the importance of interpersonal and institutional relationships, including the social exclusion documented in the Hidden Dimensions research.

Speaking for ATD Fourth World, Dr. Godinot and Abdallah Bendjallah also addressed questions on the research project’s methods. For example, they explained practical considerations that prevented the inclusion of political figures, as well as children and young people. This was unavoidable, yet disappointing as such perspectives might have further broadened the results. In addition, Dr Godinot and Mr Bendjallah discussed considerations involved in the decisions to reimburse participants for their time or to separate discussion groups by gender in some countries.

Several times the webinar conversation turned to the question of developing indicators to measure the less concrete characteristics of poverty that the ATD/Oxford research documented. While elements such as “suffering in mind, body, and heart” and “disempowerment” are essential to the experience of poverty, it is challenging to find measures for them.

However, indicators are clearly needed in order to measure these aspects of poverty. And indicators are crucial to evaluating the success of programs aimed at eliminating the broad range of characteristics cited in the research. Dr Godinot stated that indicator development is not ATD’s area of expertise. However, he very much hopes that others will use the research to develop broader understandings of poverty, as well as ways to measure it.

More on ATD Fourth World’s work on Dimensions of Poverty.