A Year at the Heart of ATD Fourth World

Posted on 16 August 2022
This page is available in Български 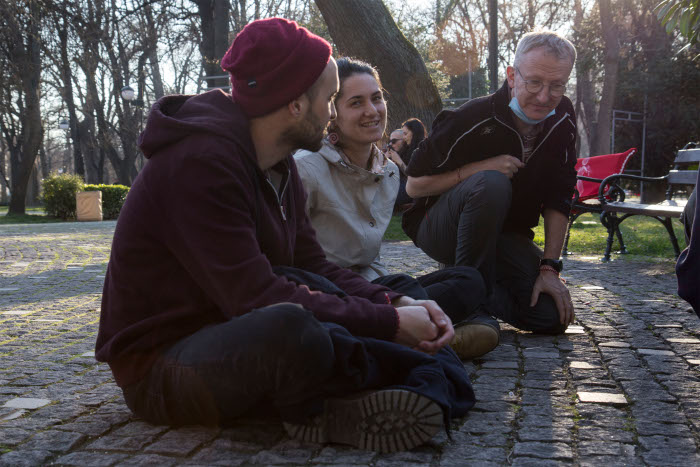 Diana Todorova talks about her experiences and impressions after a year discovering more about ATD Fourth World as a member of the international Volunteer Corps in Bulgaria.

When did you first meet ATD Fourth World in Bulgaria?

I first met ATD Fourth World in the Stolipinovo area of Plovdiv [the second largest city in Bulgaria] in early 2020. I joined the “Mobile School Stolipinovo” initiative there as a volunteer. Each week, I helped organise art workshops for children who lived in the most marginalised areas. At the time, I had been living in Spain and I was just visiting Bulgaria for a few months.

What made you want to get involved?

I’ve always liked working with children, but the workshops in Stolipinovo were truly extraordinary. The families living there had very difficult lives. But despite the deprivation they endured and the attitudes they had to fight against, they never lost hope. The children were so happy each time they saw us. And their parents never missed the chance to chat with us.

A short time before I was due to return to Spain, I spent some time talking with Véronique and Benoît, long-time members of the ATD Fourth World Volunteer Corps, who had been working for five years in Bulgaria, including Stolipinovo. At the time, their goal was to lay the foundations of the movement in Sofia, the capital of Bulgaria. I wanted to learn more about what ATD Fourth World was trying to achieve, here and elsewhere in the world. They suggested that I become a full-time ATD Volunteer Corps member and explained what that meant.

This made a big impression on me. At that time, I had decided to devote myself to a cause, work that would help me find my place and do something meaningful with my life. ATD Fourth World’s determination to overcome extreme poverty and their work alongside people in such precarious situations touched me deeply. Also, I was astonished by the international dimension of the movement and by the fact that poverty exists all over the world, including places you wouldn’t expect to find it. I didn’t have the shadow of a doubt. I wanted to get involved!

What activities were you involved in as a member of the Volunteer Corps?

The year was really varied. One of the movement’s important initiatives is the Street Library. Our team in Bulgaria runs a Street Library in the Zaharna Fabrika district of Sofia. Every Saturday with movement friends, we read books with children there and talk with their families. At the Street Library, there are always art and sports activities that we prepare in advance. But because we were in the middle of the pandemic the whole year, we had to be very creative and very careful.

The Mobile School Stolipinovo initiative was organised in a similar way. In Stolipinovo, the art workshop is run by Magdalina Rajeva, who also takes care of the “Children’s Architecture Workshops”. Our role is to develop relationships with the families and to build bridges between the local population and the school.

Because of the pandemic, we opened “Digital Inclusion Workshops” in the Sofia crisis centre for “homeless” people, and also in a shelter run by “Food not Bombs”. These meetings gradually turned into discussions about the residents’ struggles against extreme poverty.

Several times I helped organise the Festival of Shared Talents. Since I joined the team, we’ve organised two in Stolipinovo and three in Zaharna Fabrika. These events bring together people from all different walks of life for a day of fun and creativity. It was an unforgettable experience!

Quite often, we organise meetings with friends of the movement. At one of these, Véronique and Benoît ran a Forum Theatre about prejudices we are facing because we’re involved with people living in poverty or precarious situations.

Several times I had the opportunity to put my graphic art talents to use. In addition to organising various workshops and meet-ups, I designed cards, posters, and leaflets to raise awareness about our activities. One of my favourite pieces of work is the last poster for the Festival of Shared Talents in Zaharna Fabrika.

The year ended for me with helping organise the World Day to Overcome Poverty on October 17. With friends of the movement, people who live in extreme poverty, and children from the Street Library, we created a three-day exhibit, something we will all remember.

What aspects of poverty did you discover during your year with ATD Fourth World? What have you learned?

I never considered poverty as a solely financial phenomenon. But aspects of poverty that I discovered with ATD Fourth World broadened my vision of the world significantly. I met remarkable people who, sadly, had found themselves living in extreme poverty. Sometimes the people closest to them–their families, their employers, or the system–had let them down.

For me, the betrayal of trust that they had experienced was shocking and unexpected. It was simply absurd to see these people struggle to obtain things that most of us consider as a given.

Before, I believed that you should only rely on yourself, that it was important to be strong, to manage alone, and to never show your weaknesses. Later, I understood the extent to which this attitude is harmful–for me and for those I’m closest to.

This attitude always puts the other person in a position of weakness. It creates a sort of power struggle that poisons relationships between people. Feeling weak and vulnerable is normal sometimes. And asking for help is important to maintain balance in the world we’re creating.

Do you have any special memories you could tell us about?

One of my favourite moments was organising the first Festival of Shared Talents in Zaharna Fabrika. I had been part of the team for a month and it was the beginning of the pandemic’s second wave. Because there was still a lot of uncertainty about how to organise public events, I was very worried. But from the moment we arrived, the children scrambled to help us and they transformed my anxiety into inspiration.

The way one of the children from the Street Library reacted, along with her father and uncle, made a strong impression on me. They didn’t necessarily know us well. But when they saw what we were trying to do, they came to help. They helped us put the loudspeakers in place, hang up the banner, and get connected to electricity. They did everything they possibly could–it was extraordinary!

How do you see your role as a member of the Volunteer Corps?

It’s very complex. In general, the role of Volunteer Corps members is helping others know and understand more about people who live in extreme poverty. With them, we want to build a future society that will never neglect, abandon, or abuse anyone.

It’s complex because of the many opportunities that come our way. We have to be flexible and open to new ideas. But at the same time we must keep our feet firmly on the ground so we can distinguish between what is doable, or worth the effort, and what can wait a bit longer.

Does ATD Fourth World change people’s lives? What has changed for you personally?

One of the women we saw each week had a very difficult life. However, she told us that the movement inspires her. When you’re in a situation of extreme poverty, you feel like you are in a vicious circle with no way out. Working together to build a better world for everyone feeds the conviction that change is possible.

I’m impressed by the fact that in many places in the world there are people looking for ways to overcome poverty hand in hand with the very people who are most marginalized.

It has changed the way I want to live my life – consciously, with love and understanding towards the people around me. I understand better the importance of sharing my life and of pushing myself to be a little better each day.

Now you’ve decided to go back to your profession. Do you have a different outlook on architecture?

I hadn’t thought about it before. But I started to ask myself questions about social housing and how we could include residents in the conception of buildings. I’ve also been thinking about towns and cities. We can consider these a form of shelter because the streets we walk up and down every day are, in fact, a home for many among us. I’m sure I will start to change the way I look at spaces and how I communicate with people.

It was an intense year for me. As time goes on, I’m sure I’ll have have the chance to reflect deeply on everything that happened. But one thing is certain: the conversations, drawings, games, and so many times shared together will remain etched in my memory forever.