“I Don’t Want to Live off Leftovers Anymore!”

Posted on 16 October 2020
This page is available in Português 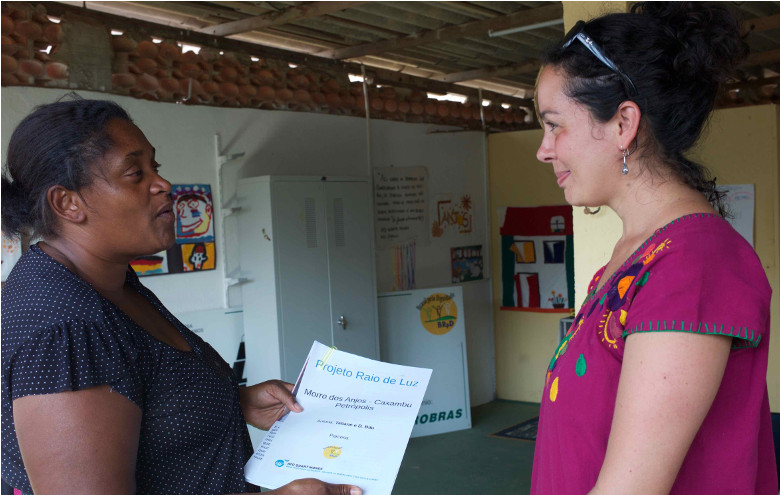 “If you plant a seed, hope is reborn. That seed means that you will have one more flower in your life.”

Tatiane Soares, Fourth World activist, was on the phone with Mariana Guerra, a Volunteer Corps member with ATD Fourth World Brazil. They were talking about plants, something they are both interested in.

Using her cell phone camera, Tatiane gave Mariana a virtual tour of her garden in the Hill of Angels favela. Located in Petrópolis’s (City located about sixty kilometers from Rio de Janeiro, in southeastern Brazil. In 2020, the Brazilian Institute of Geography and Statistics estimates its population at 306,678 inhabitants). Caxambu neighborhood, Tatiane’s yard is full of trees, plants and flowers as well as a large vegetable garden. Tatiane also showed Mariana her spectacular view of the mountains in the state of Rio de Janeiro. This is how she expresses her attachment to the land, which is at the heart of her involvement with ATD Fourth World.

Tatiane knows why Mariana should add sunflower seeds to the COVID 19 prevention kits for people living on the Hill of Angels. As she sees it, seeds embody the hugs people cannot give each other during the pandemic.

“When I think about my life, I just want to do everything I can,” says Tatiane. “Right now, people need to hear and see other people showing them affection. So I thought of sunflowers. It’s a beautiful flower with yellow petals. We’re putting these sunflower seeds in the kits so people can plant them. If you plant a seed, hope is reborn. That seed means you will have one more flower in your life. Everything we plant – really everything we do in life – is hope. And with hope, everything can work out.”

“From my own experience, I can understand…”

At the age of 16, Tatiane was pregnant and living on the street. There were any number of hardships and she was often hungry. However, Tatiane doesn’t say much about what she suffered back then. Instead, she prefers to talk about some of the interactions that helped her. There were people who inspired her not to give up but to keep trying to make a better life for herself. For example, Tatiane remembers a man who sold roast chickens.

In Brazil, as in many other countries, there is a stigma to living on the streets. People look down on those who are homeless or simply poor. Having been there, Tatiane insists that it’s important to understand extreme poverty from the point of view of people who have experienced it. “From my own experience,” she states, “I can understand why people are on the street. I know why they are in need and why they act the way they do. We need to rely more on what the poor themselves know.”

“I don’t want to live off leftovers anymore!”

With the help of her mother-in-law, Tatiane managed to get off the streets. She moved to Caxambu at a time when, she says, “There were no sewers. There was nothing.” It was up to her to figure out how her family could manage to live. She cut up old clothes to make diapers for her children. On market days, she and her neighbors collected unsold goods. Little by little, working side by side brought these women closer to each other. They learned how to stick together and survive.

Remembering violence she and other women in the neighborhood suffered, Tatiane says,

Tatiane met ATD Fourth World and became friends with people in the movement. Learning more about ATD she was reminded of her own struggles.

Women in need are warriors

From then on, Tatiane’s involvement took on a new momentum. She began to organize meetings with women from the Hill of Angels. Meeting together like that isn’t the norm for women in poverty. However, through these gatherings, each woman began to see that there were others with similar life experiences. Seeing how far they had come and all they had been through, the women from the Hill of Angels gained pride in themselves.

Through all their conversations, something clicked for Tatiane and the other women. As Tatiane explains,

“Here, there are a lot of women who are full of imagination and wisdom, and they want to overcome poverty too. In fact, I prefer women in need because they are warriors.  They want to rise above their extreme poverty.

“But all of that is behind me now. I don’t want that life anymore. I want a better life, I want to be a different woman.”

Tatiana’s concern for others isn’t just about people. “Others” for her are all living things and the entire planet. Talking about the pandemic, Tatiana doesn’t describe the situation as apocalyptic. “They say that the pandemic has killed a lot of people, that this is the end of the world,” she says. “But that’s not true at all! If we think about it, we can learn a lesson from all this.

“But we will always have the love in our hearts. This pandemic is killing people, but it will not defeat us. We have to do everything in our power to make a difference.”

More information on ATD in Brazil.