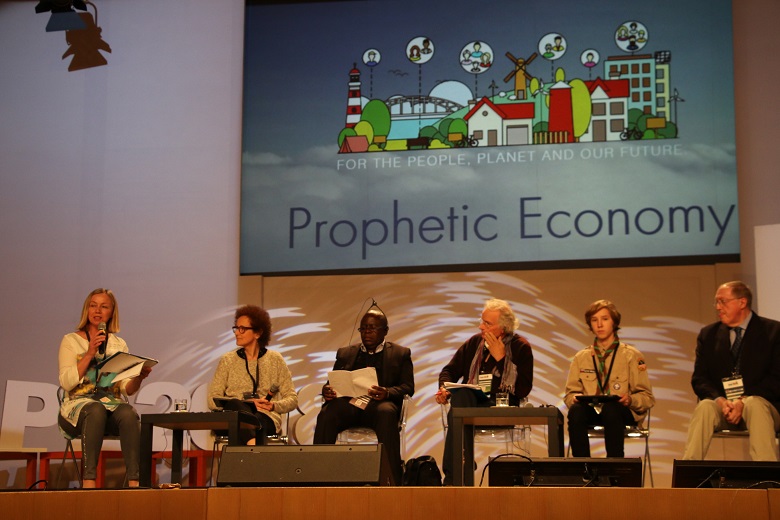 Last November, a delegation from ATD Fourth World participated in an international gathering on “Prophetic Economy”* held in Italy.

ATD was one of seven groups involved in organizing the gathering. The event grew out of a meeting with economist Luigino Bruni and other associations working to overcome poverty and promote an economy that respects both human dignity and the environment. Bruni, responsible for the international Economy of Communion, was taken with the work of ATD Fourth World:

“I was struck by the willingness of the founder, Joseph Wresinski, to make friends with all the anti-poverty projects he heard about. He established connections with them, wrote to them, and visited them, so that, according to Wresinki, no one would remain alone in his or her commitment to overcome poverty. Remaining alone, in fact, put these initiatives in danger. Without others by your side, the risk of discouragement – at any time – is so high. I said to myself, why couldn’t we do something similar and bring together everyone who cares about an economy that puts poverty at the centre, as Economy of Communion does?”

This gave rise to the idea of inviting multiple organisations, often very small ones, to take part in a discussion of best practices. Five hundred participants from all over the world, including many young people and even children, attended the event.

In addition to Wresinki’s words, another thing about ATD struck Bruni and prompted him to ask the organization to help organize the November, 2018 gathering:

“Usually in international events, including meetings on poverty, we give the floor to experts and scientists. We rarely listen to people in the field, and even less often to people who actually live in poverty. With ATD Fourth World, we had the opportunity to make the voices and skills of these people heard and seen.”

ATD was intrigued by the invitation especially as its Common Ambitions include promoting an economy that respects people and the planet. ATD Fourth World is committed to the idea of an economy that respects the dignity of each individual and encourages sharing, solidarity, and cooperation. Representing ATD at the gathering were people involved in the “Working and Learning Together” (TAE) project, the president of ECCOFOR, an education and training program that collaborates with ATD, and three members of the ATD Volunteer Corps.

The opening round table began with an overview and analysis of the current situation. During this event, a member of the ATD Volunteer Corps talked about his experience in France and Guatemala, highlighting the power of the human economy. The market economy, he explained, expels from the labour market men and women living in extreme poverty. He told a story about a women from the Democratic Republic of Congo who worked as a porter. This woman had a neighbour who lived in even worse poverty and who asked for help. Rather than simply giving her neighbour money, the porter decided to share her workload – and therefore her income and resources – with this neighbour.

The 135 initiatives presented at the gathering demonstrated the many ways that humble and modest activities can often create significant change. The NGO JEVEVEV in Benin, for example, presented a project implemented in its community. Residents saw the nearby river getting covered with a particular type of vegetation, the “river hyacinth”. This vegetation was proliferating due to climate change to the point where canoe traffic became paralyzed and the very existence of the community was compromised. However, residents discovered that these plants could provide the raw material for excellent compost, which soon replaced all chemical fertilizers previously used. The community also discovered that the river hyacinth could be used to make paper, mats, and other useful products. A plant that had been a symbol of death became a tool supporting life and development.

Such useful economic practices already exist, but they are often invisible in the media and to others. Increasing recognition will enable them to become more widely used.

Another important feature of the November gathering was interest in the perspective and thoughts of people living in situations of poverty and social exclusion. In a workshop for 150 people, the ATD delegation discussed TAE and ECCOFOR and how these projects resembled others in Madagascar, Guatemala, and other countries. The workshop focused on ideas for a new economy based on respect and designed to create long-term quality employment for people who either work in the informal sector or are completely unconnected to the labour market. The presenters gave concrete examples illustrating the importance of listening to people struggling to find and keep work so they can share their knowledge, analysis and proposals with other people. One participant noted:

“We need an economy with sustainable development, in other words an economy in which prosperity is shared. This would create greater social justice and environmental sustainability.”

Towards the end of the gathering, ATD delegate from Italy, Jean Tonglet, emphasized the need to consider the opinions of people who do not have a place in the dominant economy because of social exclusion. Too often these women, men, and young people are not consulted when economic issues are discussed. No one asks about their experiences and their life skills. Their knowledge and perspectives are not valued or even recognized. The result, Tonglet insisted, is that people who are actually quite competent remain the objects of other people’s ideas, studies, and research, when in fact they wish to be recognized as subjects in their own right, capable of thought and analysis.

“We must imagine new ways of coming together and communicating that allow people with a personal experience of economic and social exclusion to participate in these discussions in a more meaningful and less symbolic way.

Tonglet suggested that all this would require a long process involving a lot of time and energy. Such a process will be challenging because people are rarely accustomed to working in partnership with people in poverty. Such partnership requires making room for each person’s ideas and perspectives, and respecting the autonomy of each individual’s unique knowledge. However, as Tonglet stated,

“The time has come to rethink the economy, to rethink the world. We must do this not just to help the poor and not just with their “participation” as this often means taking part in projects designed by others. Rather we must start from people in poverty themselves, merging their understanding with our own, which will remain incomplete if not grounded in the knowledge possessed by people who live with and struggle against poverty day after day.”

For more information on Prophetic Economy