Skip to content
Home > Leadership Team > Focusing on the Most Vulnerable

Focusing on the Most Vulnerable 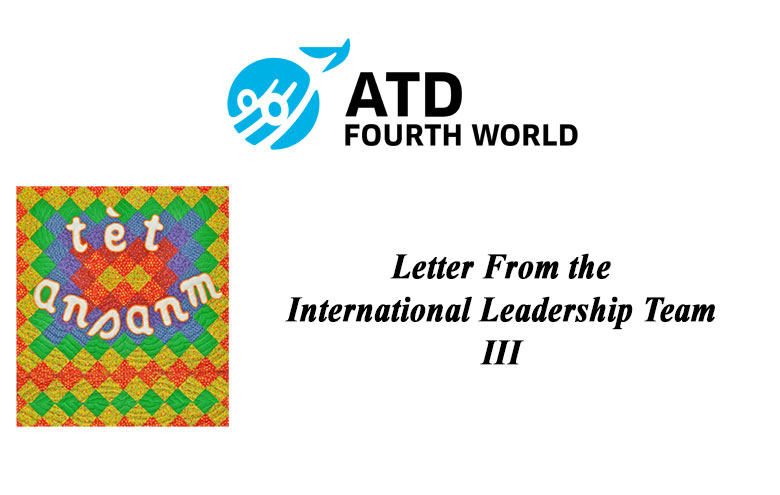 Hopefully this letter finds you still full of strength and hope.

We are still far from understanding everything that’s happening with this pandemic and what it all means. We now know that it is worldwide, and any and everyone could be affected. The pandemic has shattered lives and forced many of us into confinement.

And there is so much more to understand about and learn from what families in poverty are experiencing with this crisis. In their rural location, where telephone is the likeliest way of being in touch, Karen, a volunteer in New Mexico, was telling us: “We have to learn to hear inside people’s silence, without being intrusive just letting them guide us. We need to learn to follow people in the flow of their conversation.”

In Europe and North America, people are starting to think about how to handle coming out of confinement, but we’re learning that any return to normalcy is a long way off. Enduring months without school, many children have stopped whatever learning plans are being offered. There is a huge risk that kids will drop out of school and that their parents will be held responsible. Our challenge is to take this situation on with all of the children, all of the parents, and with the teachers and public authorities. The message is: “No, there are no parents being negligent and, no, there are no children who don’t want to learn!”

On other continents, we are looking at the possibility of missing a whole year of schooling, a source of great anxiety for children and young people. And, of course, their parents, who have worked so hard to send their children to school, are worried and upset.

In Africa and in Haiti, the number of deaths due to COVID-19 are lower for now. But the fear is that a surge could bring many more deaths, overwhelming the health facilities which, in some countries, are fragile and where few people have any health insurance. Even with the massive amount of information flooding the media, some people, particularly those outside of big cities, are not aware of the warnings and advice given by the authorities. And sometimes preventive measures are just impossible. How do you keep washing your hands when no running water is available or when the cost of a bucket of drinking water has doubled?

In the Democratic Republic of Congo, ATD members are approaching local authorities to ensure access to water at no cost, thus holding the government to its commitment.  Authorities have brought water cisterns to Roma camps where families are living outside of Paris. Access to water has been a dream for people there and it has become a reality because of the epidemic. But when confinement is over, will the authorities still provide water for these families?

In Bangui, ATD members continue preventive efforts by setting up mobile water sources in the neighbourhoods, giving people the soap and water needed to wash their hands regularly. Cedric, a mediator for socio-cultural outreach work,[1] has taken it upon himself to visit families who had a terrible time when the overflowing river flooded their areas. People lost everything. Some got together and are living under tarps or tents provided by NGOs. But way in the back, behind the people under the tarps, Cedric started to meet people who have no real protection and who are huddled under bits of plastic or cardboard. He asked if they would be willing to be in charge of the soap and water for all the families displaced to this area. As he said,

“This way they won’t just be people receiving help; they’ll also be the ones to help others.”

Keeping the most fragile people at the heart of everything we undertake remains our priority.

“The families living in deepest poverty are not afraid of being sick, but they fear dying of hunger,” Shaidi, a young ally who lives in Bukavu, told us. In a few countries, the authorities are able to set up distribution of food and government entitlements.  In several places, ATD members are checking with authorities to make sure that families in the worst situations of poverty are on the lists for support. Yet, too often, families in deepest poverty can only rely on the solidarity of others like themselves for food and medicine.

This is unacceptable and can’t continue in a crisis that goes on and on. We have to speak up about this!

So many people around the world live day-to-day with no safety net when even harder times hit. We see the devastating effects in this crisis. In the Philippines, as in France, Spain, Guatemala, or Madagascar, ATD members have united to bring emergency aid. They take time to think through how to help without creating divisiveness among people.

In Guatemala, the ATD team put a stop to activities organized at the Fourth World house for obvious reasons. One day some of the young people who live and work near the garbage dump came knocking on the door of the Fourth World house. “We don’t know where to find food or where we can wash our clothes. We’ll be the first to die if this keeps up,” they explained. Dimas, a volunteer, quickly understood that they had to open the house up to these young people. Taking the necessary health precautions, they invited the young people in to take showers, rest, and build up their strength before going back out to the streets where they survive by looking after one another.

Everywhere we see the important role activists play in their own communities. With people stuck indoors because of confinement measures, activists like Vivi in Guatemala, or the group of facilitators in Manila, and many others elsewhere have gone out to check on their friends and neighbours to make sure they are okay. They coordinate local initiatives to ensure that the support made available because of the crisis reaches those most in need. In building our movement in the years to come, we need to put energy into helping these next generations of activists emerge, and offer them training to go further in the radical choice they have made to break out of poverty with their own people.

This humanitarian crisis is a cruel reminder of the inequities of our world and how blind we are to this lack of equality. In so-called normal times, families living in poverty around the world are already in a daily struggle to survive. It’s what our friends in Uvira in the Democratic Republic of Congo are dealing with right now. Since last Thursday, devastating floods have taken lives, torn up the roads, and destroyed homes leaving 75,000 people homeless.

They share the plight and the insecurity of so many in poverty everywhere who have no choice but to live in the most unprotected areas.

Children and adults working with Tapori, an ATD international chain of friendship and solidarity among children, are on the job, bringing support to the people still trapped by the flooding waters and the resulting mud slides. Preventive measures necessitated by COVID-19 make it difficult for support coming in from other areas to reach the people. At this point our friends are still on their own. Their mutual support is all they can count on for now. Members of ATD Fourth World in the region are trying to see if there is a way to get through the heavily damaged roads to bring in material aid.

These young people from Uvira are amazing us with the power of their commitment to others. May their strength and conviction spread to young people everywhere so that we can end poverty!

We are hearing many organizations, celebrities, and the general public talk about how to build things up after the crisis. What’s going to happen after the epidemic? Things can’t go on like before.  We want to weigh in on these discussions in a strong and focused way so that the voice of those in deepest poverty can be called upon and heard, and so that their experience can be taken into account. It’s the only way to build a peaceful world, a world where each person’s dignity is equal to that of anyone else – a world all human beings aspire to live in.

In order to do this, and yes, amidst everything you are handling every day, we want to ask something of you. Will you agree to take time to reflect personally and with people around you whose thoughts might not be heard? We propose that you do this on or about May 15th, the International Day of Families around the following questions:

Let’s make May 15th a movement-wide rallying point, bringing everyone’s thinking together to build our strength to keep going forward. Your reflections on the questions above will help ATD Fourth World craft an insightful and provocative message for the general public and institutions of all kinds — a message that will help inspire our October 17, 2020 commemorations, the International Day for the Eradication of Poverty. We are sure that your thoughts will enrich the current discernment process on the governance of our movement.

Please send us your contributions in whatever way is easiest for you.

[1]Between 2016 and 2019 ATD Fourth World did experimental training in the Central African Republic on mediators for socio-cultural outreach.