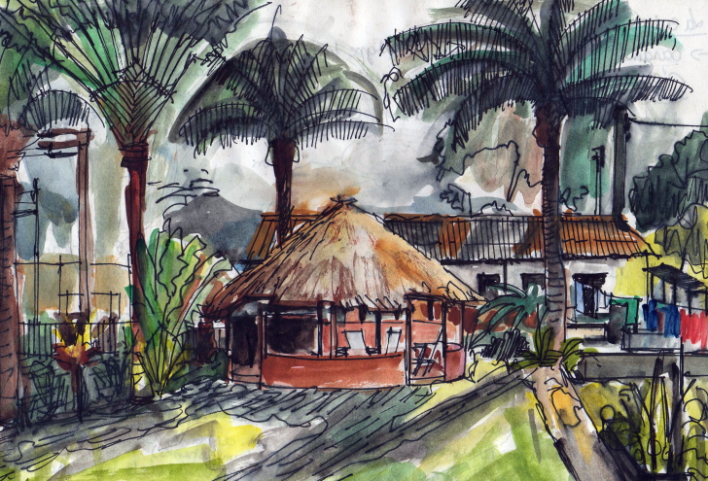 This article is by Niek Tweehuijsen, a member of the ATD Fourth World Volunteer Corps.

In the Central African Republic, as in many countries, not everyone can afford to live in a safe place. Poverty-stricken people, especially, have no choice but to settle in flood-prone, dangerous, or polluted places.

Barclay, his wife Cyndie, and their two children had resigned themselves to living in a dangerous neighbourhood. Rebel and “self-defence groups” had been shooting at one another on a regular basis for years there. These groups also set fire to businesses that did not agree to pay a fee for their “protection”. The groups killed mercilessly, and turned Christian and Muslim communities against each other. Even today, the inhabitants of this neighbourhood are always on the alert, fearful of stray bullets.

However, Barclay and his family managed to escape this neighbourhood and settle on the banks of the Oubangui, the river that runs through the capital. Barclay found a room where his family could live in safety. The rent was within their reach. It was like a new beginning! But the respite was short-lived. During the rainy season, the river flooded their new neighbourhood. Water even came straight up through the ground from the water table.

Unrestrained woodcutting, often carried out in suspicious circumstances, has weakened the balance of nature in the area. Every day, hundred-year-old trees lying on large trucks leave the country in endless convoys. These raw materials are then exploited outside the country’s borders to enrich other nations’ economies at the expense of Central African Republic’s. Other trees are burned or felled for charcoal production and firewood supply. The forest is gradually disappearing. Endangered by the disappearing habitat, animals migrate to seek refuge elsewhere. Rivers have also been mistreated. Some are diverted from their natural beds to irrigate gold and diamond mines. Others become polluted by the chemicals used in mining. Fish, insects and other small animals die in silence.

People who used to make a living through hard work and responsible land use have become impoverished. Everyone who can manage it leaves for towns and cities in order to survive. There most of them fall into even deeper poverty. Elsewhere, mining sites drain the surrounding country of its residents who become victims of the companies’ outrageous exploitation. Deluded by the success of a few lucky individuals, the mining workers end up doomed to disease and violence. The country’s natural wealth has become a curse, attracting the unscrupulous and powerful, causing looting and corruption.

Climate change and human greed — these are not just stories you hear about. Barclay and his family suffer the consequences of these evils that degrade the planet and divide humanity.

Along with other residents, Barclay tried to resist the rising river. He thought maybe he could protect his family from getting malaria or typhoid from the stagnant waters polluted by overflowing latrines and septic tanks. But soon it was clear they would have to move. Water entered their house with dazzling speed. Barclay and Cyndie were just able to save their children, some furniture, and the mattress. Helpless, they watched most of their belongings drown. They saw the small kiosk where Cyndie had sold soap and groceries floating empty in a little lake the flood had created. The profit from this small business had made ends meet when the income from Barclay’s work was not enough to live on.

Where should they go now with so little in their pockets? The neighbourhood they know best remains the one they left because of violence. So, they decide to go back. Temporarily, they tell themselves. But they couldn’t re-enrol their children in school or save enough money to start a small business again. Their life is even harder than before, and Cyndie suffers because she cannot contribute to the family’s income.

Barclay is back where he started.  Yet he still sees himself as lucky:

“Other disaster-stricken families are still living under tarpaulins in temporary camps. I will get through this without waiting for help that may never come. One day, my children will go back to school. One day, I will live with my family in a safe place. I can’t let myself be beaten down.”

Some NGOs arrived to provide emergency assistance to the flooded area. An international radio station raised funds. But Barclay’s family did not benefit from this relief because they were no longer living in the flooded area and were not on the lists of victims. Nor will they be counted in the statistics, probably like hundreds of other families.

His family remains active as well. Despite all they have suffered, they have not given up.  Self-reliant, they are figuring out their own strategies to survive. Nevertheless, one question continues to torment Barclay: how will they pay for the children’s school enrolment fees? They had already paid the fees, at the cost of so many sacrifices, in the other school by the river.

Climate change – its causes and consequences – is directly and harshly affecting Barclay’s family and millions of others around the world. They have no choice but to live in polluted areas, exposed to cyclones, floods, and increasingly frequent landslides. In order to survive, they must accept dangerous work without protection from disease, accidents, and premature wear on the body. They have to settle for cheap, harmful food made from synthetic chemicals.

Yet in the face of all this, these families adapt, struggle, and resist, keeping their heads high. Always on the edge of survival, their eyes are still fixed on the horizon and they do everything in their power to make their children’s future different from what they endure today. Their experience and understanding of life are only too rarely shared. However, the knowledge that they possess could enlighten our thinking and decisions on how to build a more just world, with an economy that respects human beings and the earth.

Let us know how to listen to them, because their lives today could be our fate tomorrow.

Recently, Barclay learned that he faces with another threat that is destabilizing the world: the coronavirus. He didn’t hesitate for long. He knew where to go to talk about this: the ATD Fourth World’s Courtyard! There, he is used to meeting other young people: those who carry out cultural actions in underprivileged neighbourhoods and villages and who also earn their living day to day. Like him, they find there a space for conversation and learning from each other.

Barclay carries on with his waste collection rounds. Now they last longer because he takes the time to tell people how to keep from getting the virus. Everyone can read and see the self-protection measures he has drawn on his cart.