Jail Is No Place for Children 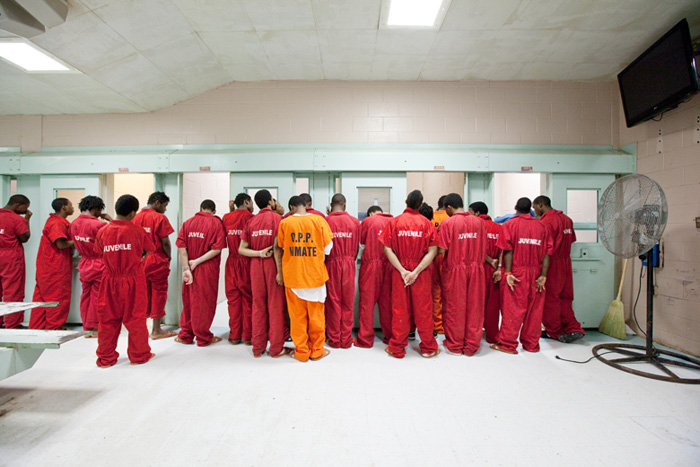 On October 17 in New Orleans, Jaquin Thomas, age 15, apparently committed suicide in his cell by asphyxiating himself with a mattress cover. Jaquin had not been found guilty of a crime. He hadn’t even received a trial. He had been in jail for 98 days waiting to go to court, much of this time in solitary confinement.

Mass incarceration and juvenile justice are big problems in New Orleans, as elsewhere in the United States. Like Jaquin, the vast majority of people in the Orleans Parish Prison have not been tried or convicted. They are in jail simply because they cannot afford to pay their bond while they wait for a court date. Only 10% of the prisoners have been convicted, many for minor non-violent offenses. Jailing people in poverty can sabotage their already precarious existence. Innocent people lose their jobs, their homes, and their children while they are in jail.

Sometimes children get caught up in the criminal justice system and never escape. For years, families ATD knows have seen their children trapped in the “school to prison pipeline” that moves young people swiftly from suspension to expulsion, juvenile justice detention to adult prison. The New Orleans team recently decided to make this issue a focus of their work because the problem of mass incarceration—for young people and adults—has become particularly acute.

Having been involved with families in persistent poverty for decades, ATD Volunteer Corps members knew a lot about individuals’ interactions with the prison and juvenile justice systems. One mother described her son’s experience of being arrested in school after getting in trouble. Because he had so many school absences in addition to the arrest, he must now attend a special program. If he does not attend regularly, his mother may be arrested and he may be sent to the juvenile jail. His mother says,

“They suspend the kid every week, and they counted the days of suspension as absence… But with this program they want him to go to I am afraid that this will lead him to jail.”

Another young man is one of many children whose future was stolen by the devastating hurricane Katrina that forced many people to flee New Orleans in 2005. Returning at age 15, he was put in a class with children five years younger. He quit school and now has trouble keeping a job. He says,

“I feel trapped! I can’t get a job and without a job I can’t pay rent. It feels like you don’t have a right to nothing. You can’t vote, you can’t make decisions, you can just hang out there doing nothing and being arrested again and being put back in jail.”

Having heard stories like these for years, ATD Volunteer Corps member Maria Victoire teamed up with two organizations that address the root causes of these situations. Among other activities, these organizations strive: to keep young people in school; to improve violent conditions in prisons; and to oppose the injustice experienced by people in poverty when they interact with schools, courts, jails, and prisons.

ATD now acts as a link between some of the city’s most ignored families and Families and Friends of Louisiana’s Incarcerated Children (FFLIC). FFLIC trains parents to advocate for their children to prevent the school suspensions and expulsions that lead to juvenile detention or even adult jail. It also helps parents navigate the juvenile justice system and organizes advocacy efforts for change. Through FFLIC, parents in poverty helped pass a new state law that improves conditions in juvenile justice detention facilities and helps keep young people out of adult courts and prisons.

Many families with teenagers were very happy when they learned from ATD about FFLIC. Sometimes people living in extreme poverty do not know where to turn when they are experiencing injustice. Through ATD’s partnership with FFLIC, marginalized families can now access their services. One person said,

“If I’d known you [FFLIC] before, I would have gotten my high school diploma and not ended up in jail!”

ATD members living in persistent poverty are overwhelmed by a struggle to survive and a lifetime of being told they are no good at anything. However, with ATD acting as a link, the city’s most excluded families are connected to FFLIC’s and OPPRC’s services and advocacy. They too are participating in efforts to fix the school, court, and prison systems that so often crush people instead of enacting justice.

To learn more about ATD Fourth World in the United States, click here.

For first hand accounts from families in poverty who experienced hurricane Katrina, see “Not Meant to Live Like This,” a free e-book from ATD Fourth World in the United States.

For the perspective of ATD Volunteer Corps member, Maria Victoire, on her work with the New Orleans criminal justice system, click here.

Photos courtesy of Richard Ross and the Juvenile in Justice project. Since discovering that kids as young as ten are entering the American juvenile justice system, Ross has dedicated himself to research and documentation of the system. For more information on Ross’s work, including his recent publication, Girls in Justice, click here.