Joseph Wresinski Centre Nominated for ‘Memory of the World’ Recognition 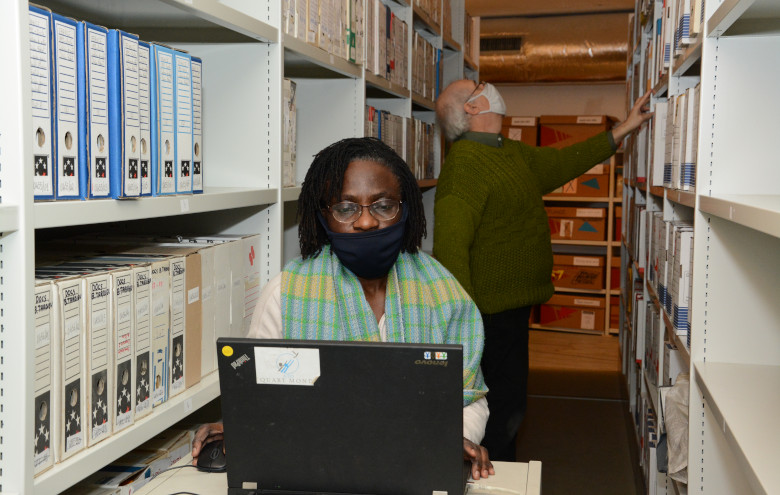 Will the world recognize the heritage of poverty?

This invitation follows ATD’s recent request to UNESCO to include the JWC in its Memory of the World Register. Ms Roger-Lacan and Mr Yves Saint Geours, president of the UNESCO French commission, both support this request. So they arranged for UNESCO ambassadors from Palestine, Bangladesh and Albania, both involved in Register’s work, to visit the JWC. During the ambassadors’ visit, ATD presented its current work as well as its historical connection to the UN organisation.

During the visit of Véronique Roger-Lacan and Marie Odile Payen there was a presentation of the JWC. ATD’s Martine Lecorre and Bruno Tardieu discussed the importance of the JWC archive to people in poverty around the world. They expressed their hope that the life stories, struggles, and thoughts of these families would, in fact, be included in the Register.

“Poverty everywhere in the world is forgotten, even denied”, said Tardieu, JWC’s Director. “The history of those who live in poverty is  disappearing. [ATD founder] Joseph Wresinsk, who grew up in poverty, knew from experience that others don’t believe what people in poverty say.

“So he asked ATD teams to record, photograph, and keep track of the suffering, courage, resistance, and intelligence of people in poverty and of those who work alongside them. Without this part of our common heritage, humanity cannot fight poverty effectively. […]

“Survivors of the violence of poverty trusted Joseph Wresinski, a survivor himself. And this trust continues with ATD Fourth World today. Also, people in poverty are not simply giving us archives from a study. Rather, these are records of a life shared with ATD teams. They are records of close personal relationships that these people whom others cast aside have sought, hoped for, and chosen.”

A valuable history for humanity

Martine Lecorre, ATD Deputy Director, addressed the question, “What does the Joseph Wresinski Centre represent for the people experiencing poverty whom we [ATD] work with?”

By way of answer, Lecorre described what one ATD member had said to her. “Huguette, who comes from the world of poverty and lives in western France, told us something at the inauguration of the JWC. She said,

‘You need to know where you come from and who you are, in order to know, to choose, where you want to go. This is why I chose to get involved with ATD; because ATD is a movement that recognizes me as a person with a history. I discovered myself as an actor in history, “History” with a capital H. Today I feel that I exist and I am proud to be able to say it’.

“I can still hear Maria Angeles from Madrid”, Lecorre continued, “after her visit to the JWC two years ago. She told us,

‘We are swept away everywhere. People refuse to see us. They count us for nothing. But our story lives here.

“In the JWC’s written and photo archives, families in poverty from around the world are rediscovering their roots, the faces of their own people. These families that we refuse to see and hear are thus breaking the silence they have been forced into. They are writing and bringing to life this fabulous story of people in poverty from around the world. And they invite others to think and work with them.

“If the JWC is listed in the Memory of the World Register, it will be supported, protected, and recognized as fragile yet precious to humanity.”

*A French academic society devoted to the humanities