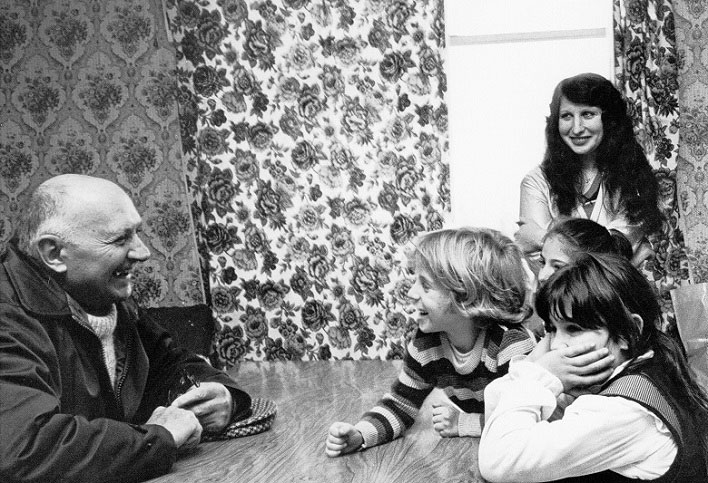 Joseph Wresinski was born in Angers, France, on February 12, 1917. Today is the 99th anniversary of his birth.

As he was growing up, he experienced first-hand the ways in which society makes people in poverty feel invisible.

“Poverty, material deprivation, and oppression inflicted by those who have power are hard to bear. What is truly insufferable however is being despised and continually reminded that one is an inferior and an utterly useless being. Being treated as a person without dignity, even by those close to one is intolerable. ‘People treat us like nobodies…. Are we dogs to be kicked around they way they treat us at the town hall?’
“This is where the difference lies between poverty and misery. A person in misery suffers an unbearable situation, being considered negligible or, worse, a pernicious being who should never have been born, while deep inside he still knows he is a person. To long for dignity, to dream of being someone and yet to be denied this, even by those hardly better off than oneself: the neighbors, the grocer, the mail carrier — that is misery. And that is what makes the difference between poverty and exclusion.”
— J. Wresinki, Blessed Are You the Poor, Fourth World Publications, 1992, pages 16-17

Any society based on good governance and solidarity should call into question the historical forces that have led people to live in inhuman conditions, excluded and isolated, experiencing evictions, uselessness, and the misery of extreme poverty. This suffering should haunt us until, together, we can overcome the inhumanity of poverty making it possible for each person to live in dignity.

To do this, however, it is important for all of us to see the problem — as well as to discover the strength and aspirations of each person.

Around the world, millions of people are without decent homes, decent work, or resources. People live in the streets, find food by picking through garbage, and struggle for survival. And yet, so often, society’s only response is to offer used clothing, a few nights in an emergency shelter, and a bowl of soup.

Joseph Wresinski’s first response is that to make a start at changing this, invisibility must end. Each of us must become aware of the situation, examine it head on, and look each other in the eyes, seeing the dignity of each woman, man, and child.