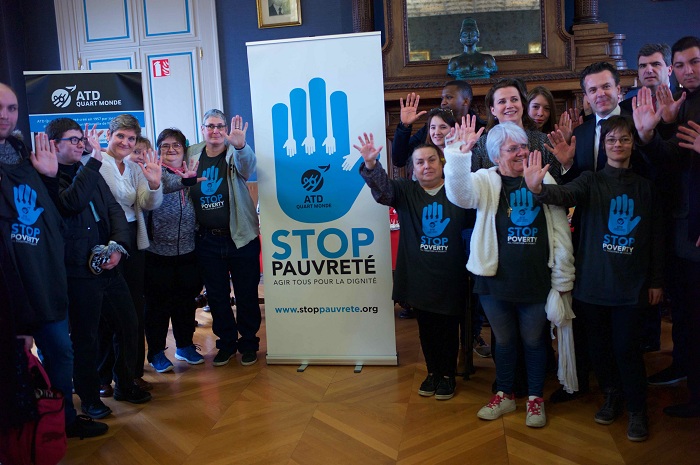 In February, Isabelle Pypaert Perrin, Director General of ATD Fourth World, launched the global campaign “STOP POVERTY, All Together in Dignity” with a speech in Angers, France where Joseph Wresinski was born 100 years ago.

A hundred years ago Joseph Wresinski was born. What a birthday! But we are not gathered here to celebrate the past; Father Joseph Wresinski’s life and his completely novel way of thinking give us inspiration for the future.

It is for that reason that we are now launching the campaign “STOP POVERTY, All Together in Dignity”. Because the young people of today refuse to let the world keep on advancing while a large section of humanity gets left behind. We want these young people to know that Father Joseph’s experience and convictions support what they believe in.

We want young people to know that they can also count on everyone involved in ATD Fourth World. We are people of all different ages and backgrounds, all working to overcome poverty.
Young people are responsible for shaping the future, but they cannot do it alone.

They need other people to support them. We are reaching out to all young people to encourage them and contribute to their efforts. These young people see that strength and power in the world is not heading in the direction of justice or peace.

They see a world too often shaped only by financial concerns that do not look beyond profit making. They see a world of knowledge that pushes aside so many different kinds of intelligence; a world of economics that ignores so many people wanting to work.

Young people see all this and they are left searching for meaning, authenticity and genuine relationships. Joseph Wresinski was above all a man of meaningful relationships. He believed in people sharing their lives with one another, just as he believed in the relentless search for the liberation of his people.

In fact, it was his own experience living as a priest in a homeless camp—and the experience of countless ATD members around the world—that confirmed for Wresinski his sense that, while poverty may not look the same in different countries, the essential elements of isolation, humiliation, and being looked down upon are identical around the world.

In Europe or in Africa, people in poverty know they are seen as less than human, but they refuse to accept this. From New York to La Paz, families in poverty struggle so that their children will not experience the life they endured. They recognize that they have both good ideas and determination, and they want to use both in an effort to make the world a place where all children will have a better future.

Father Joseph held the conviction that poverty is not inevitable. He never stopped telling people: no matter where you are today, you can always do something.

When he moved into the homeless camp in Noisy-le-Grand [France], the families living there reminded him of his own family. Wresinski told them,

“You are valuable and so is your neighbour. Together, you can fight”.

Wresinski would say the same thing to young people who came to help him. They may not have known much about poverty, but they learned about it through him and joined together to work as partners with the poorest families in the camp.

Wresinski said the same thing to people from many different backgrounds. “You are very important. You can make a tremendous contribution to our work. In fact you should help us because you are the only one who knows how best to make an impact in your community or your profession.”

Joseph Wresinski’s efforts to overcome poverty say to young people everywhere that it is not enough to get mad and criticize others. People must work together. And working together requires genuine encounters between people who are willing to try to understand one another.

Joseph Wresinski’s many endeavours and confrontations demonstrate to young people today that overcoming poverty is a long-term struggle that takes endurance. Therefore, through the 2017 campaign, which marks 60 years since the creation of ATD Fourth World, we are reaching out to young people in particular to offer them what we have learned through long experience fighting poverty. We also offer our determination and our strength to young people to help them continue the fight against poverty—perhaps to end it!—and the struggle for the dignity of all human beings. Joseph Wresinski, born one hundred years ago in Angers, embodied that struggle, as do his people today, the people of the Fourth World, standing tall and coming together to build a world that belongs to all the people on earth.
Video of speeches by Claire Hédon, Isabelle Pypaert Perrin and Franck Lenfant.  Angers, France, on February 12th, 2017. (French only.)