Launch of the #StopPoverty Campaign in Africa 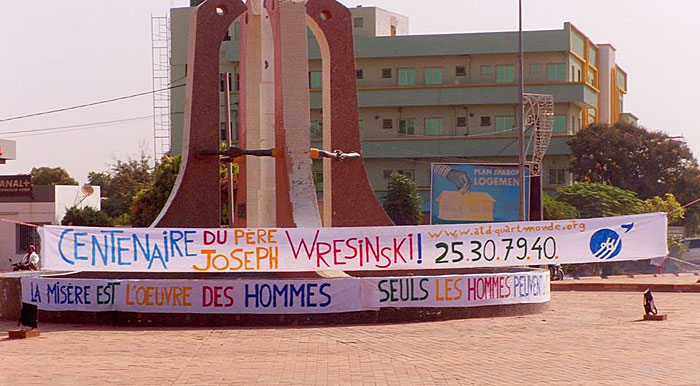 Photo ATDFW: Banner at the Human Rights roundabout on avenue Father Joseph Wresinski: “People created poverty, only people can make it go away”

We are happy to share with you an account of the launch of the #Stop Poverty Campaign in the countries of Africa where ATD Fourth World is engaging with families struggling against extreme poverty on a daily basis. The diversity of the events described reflect the creativity of our teams, activists and families in marking the campaign launch.

In Bangui, our team facilitated a conference on the philosophy of ATD Fourth World founder Joseph Wresinski. For more  information read the article about the launch here.

Democratic Republic of the Congo On February 18, ATD Fourth World was invited to the screening of two films in conjunction with the launch of #StopPoverty. The two films were: 50 ans de combat contre la misère (50 Years of Struggle Against Extreme Poverty) and a video about a youth solidarity project to help a family rebuild their home.

Comments from the audience included:
“Father Joseph’s philosophy guided the action of young people”
“We cannot help those in poverty today and abandon them tomorrow”
“Young people want to be at the side of those in poverty”.
“In both movies, we see people together working in solidarity. I just discovered that ATD   Fourth World is a real movement of people working together” On February 17, The Friends of ATD Fourth World celebrated the centenary of Joseph Wresinski’s birth by bringing together members of ATD Cameroon and Bangui, artists, religious leaders and friends. The screening of the film Joseph L’Insoumis (Joseph: The Dissenter) was followed by a group discussion. Many were moved by the film which tells the story of the founding of ATD Fourth World in an emergency housing camp in Noisy-le-Grand near Paris.

On February 12, there was an open house at the ATD Fourth World office. Through exhibits there, visitors discovered  the work of ATD Tanzania’s actions. There were also exhibits on the origins of ATD in Noisy-le-Grand, Joseph Wresinski’s youth, and a booth where visitors could sign the #StopPoverty Call to Action.

The film 50 ans de combat contre la misère about the life of Joseph Wresinski and the history of ATD allowed visitors to express the similarities between Wresinski’s life and their own, including their experiences of rejection, non-recognition, and loneliness, but also their struggle for dignity. A play by a group of young people was performed on the theme of how a hospital was built in the community based on an approach of solidarity. Theater: “Wherever men and women are condemned to live in extreme poverty, human rights are violated. To come together to ensure that these rights be respected is our solemn duty.”

OnFebruary 12 in Ouagadougou, members of ATD distributed fliers on avenue Joseph Wresinski about Wresinski’s life. At the Courtyard of 100 Trades, after watching a play about the important events in Wresinski’s life, there was a group discussion on what had been learned from his life:

Among the comments were:
“He put the courage of his life in us!”
“His manner changed how I look at others”
“Do everything possible so that those in extreme poverty can express themselves and have their place in society”
“I learned that because you live in poverty, you are not less than others”
“It is not only about ideas. You must put them into practice.”

In Senegal, the  #StopPoverty launch also involved signing the ‘Call to Action’.