Working to Leave No One Behind 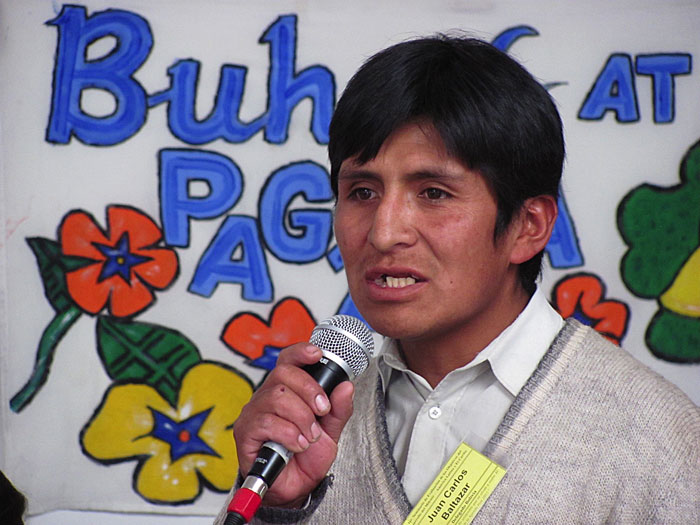 A story of a remarkable victory with people living in extreme poverty:

Reflecting their shared collaborative work on leaving no one behind, this story has been co-signed by:

These are the words of Juan Carlos Baltazar from Bolivia. Juan was a delegate at a seminar* that ATD Fourth World organized at the United Nations headquarters in New York in June 2013.

At this seminar, ATD Fourth World had a delegation of 50 members participating, including people living in extreme poverty. They presented a working paper containing a series of observations and proposals on addressing extreme poverty to a group of high-level representatives. Juan’s address, delivered with great emotion, prompted a standing ovation by everyone in the room, including ambassadors from four continents sitting on the stage. It was widely covered on social media.

Why did this seminar, with its very moving moment, prove to be an important turning point?

Thirteen years prior to this, in September 2000, the United Nations had set out eight Millennium Development Goals (MDGs) for the period 2001–15. The first of these goals sought to reduce the number of people living on less than $1.25 a day by 50%.

When news of the new goal reached areas in deep poverty, the reaction was dramatic. Residents told local ATD teams: “Only half? It will not concern people like us. No one here will be part of it”.

To their ears, they viewed this goal as a declaration of abandonment, since it encouraged public and private actors to give priority to those who are the easiest to reach and to exclude those in the deepest poverty.

This was not the first time that ATD had learned from the experience and knowledge of people living in extreme poverty about the importance of leaving no one behind. In fact, the very founding of ATD Fourth World was influenced by it. In the emergency housing camp in Noisy-le-Grand on the outskirts of Paris in the 1960s, families were offered the opportunity by local authorities to resettle to better quality housing. This came only after many years of struggle for this right. They agreed among themselves that they would only move on condition that all the families — the strongest and the weakest — would do so together.

In the 1970s, this learning proved essential in the development by ATD Fourth World of the concept of “creaming the poor” — where social programs fail to reach those in deepest poverty, but rather skim the easiest to reach off the top and then claim success. Later in the 1980s, ATD brought this issue to the fore of UNICEF’s thinking by convincing it to abandon its goal of reaching 80% of children globally, and instead reaching out to the 20% hardest to reach.

With all this background, it came as no surprise to our teams involved in improving the MDGs that what was seen by much of the world as an ambitious goal of reducing poverty by 50% was actually experienced as a rejection and abandonment by the very marginalized communities the United Nations thought it would be helping through the MDGs.

In 2011, thanks to the persistent efforts of the ATD Fourth World United Nations teams, the UN General Assembly commissioned an assessment of the MDGs from the perspective of populations in extreme poverty.

ATD Fourth World was entrusted with leading this evaluation. It was carried out in collaboration with other actors such as Social Watch and the International Trade Union Confederation (ITUC). The ITUC, with its membership of 181 million workers, organizes campaigns for a living wage, decent working conditions and comprehensive social protections.

ATD Fourth World carried out participatory action research from early 2011 to late 2013. This research gathered over 2,000 people in 22 Global Northern and Southern countries, a majority of whom were people living in extreme poverty. Prior to this, eight international seminars had been organized. The inclusion of countries from the Global North emphasized the fact that extreme poverty exists around the world, not just in those countries of the Global South as targeted by the MDGs.

In June 2013, ATD Fourth World presented a set of proposals and recommendations based on this research at the final seminar at the United Nations in New York. They published a Common Statement with ITUC and Social Watch in which the three organizations promised to “commit to working for the global development agenda, up to and beyond 2015, to ensure no one is left behind and to implement the UN Guiding Principles on Extreme Poverty and Human Rights … to support full employment and decent work for all, including the implementation of social protection floors at the national level in all countries…”
In April 2014, ATD Fourth World published a comprehensive report: “Towards a Sustainable Development that Leaves No One Behind: Challenge 2015.”

In September 2015, the principle of “leaving no one behind” was officially recognized in the formulation of the new Sustainable Development Goals (2016–30), replacing the discredited MDG goal of a 50% reduction in poverty.

Reducing extreme poverty for all people everywhere by 2030 is now a universal commitment linked to the implementation of social protection floors at the national level (target 1.3) and to full employment and decent work for all (target 8.5).

This was a victory achieved with, and for, people living in extreme poverty and their partners. Now is the time for governments to walk the talk and fully implement the 2030 Agenda to leave no one behind.