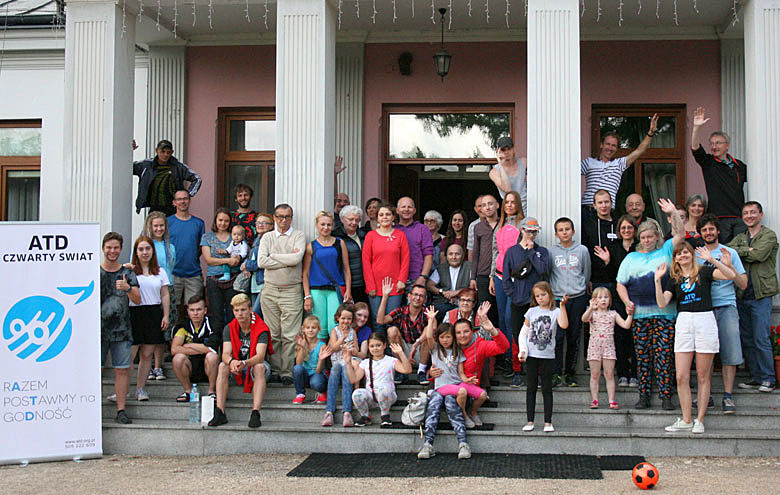 On July 12-14, ATD Poland hosted the Summer Seminar for Equal Opportunities in Nowe Kotlice. Surrounded by forests and fields, 57 people participated in numerous workshops and activities. Festival of Dreams was an opportunity to meet old friends and for many ATD members to meet for the first time.

Establishing new friendships and getting to know each other started with the “Who am I?” workshop. This ended with a presentation by ATD Fourth World Volunteer Corps members based in Bulgaria who are currently involved with people taking initiatives against poverty in Hungary, North Macedonia, Romania, Serbia and Bulgaria. Photographs of forgotten districts of different cities made participants aware of the difficulties faced by inhabitants there. Yet the inhabitants find strength and enthusiasm to take part in craft, artistic and educational activities.

The next event was an innovative workshop, “Map of homelessness”, aimed at showing the complexity of everyday lives of homeless people. A map was created to illustrate simple activities such as eating, showering, washing and sleeping, which homeless people perform in different locations, often in isolated areas. A person’s home is their base from where they set off to work, to shop, to go to the cinema, to go to where they want. They can then go back home to rest, eat and so on. Homeless people don’t have such a centre where they can feel safe and regain their strength. Every day they have to travel between many points on their own “map of homelessness”.

Participants also took part in activities like canoeing and art workshops: crocheting, decorative fruit cutting and a plant workshop. The goal was to allow people the space to rest and relax. The works of art created in the workshops made all participants feel pride and joy.

Saturday concluded with a bonfire, which gave everyone the chance to discuss their thoughts and feelings. The bonfire concluded with the “Storytellers’ game”, an improvisational theatre activity. Using their imagination, game participants could move in time, take on other personalities, and teleport to various places in a blink of an eye – from mountains to seas, from cities to deserts. Spontaneously playing different roles and imagining new circumstances one has to face–despite the fact that it was only a game–showed participants how to throw off the curtains of everyday life and the ways one’s reality can be relative.

The final workshop on Sunday was based on the “Hidden Dimensions of Poverty” report, an international participatory research project led by ATD Fourth World and Oxford University. After the introduction, participants broke up into six groups. Each group was asked to discuss and present, however they wanted, one of the aspects of poverty described in the report. With the help of posters, comics and theatre scenes, the following aspects were presented to the whole group: “Social maltreatment”, “Lack of decent work”, “Insufficient and insecure income”, “Material and social deprivation”, “Unrecognized contributions”, and “Institutional maltreatment”. All these aspects were presented with great commitment and seriousness.

The Festival of Dreams concluded with everyone discussing their impressions and reflections, what worked well and what could be improved in the future. Everyone was happy to spend time together, to talk and have others listen, to think about problems and look for solutions. Some said that gatherings like this help overcome daily struggles and give hope for a better future. Feedback was very inspiring and will help organizers think about the next Festival of Dreams.