Now I Can Be Proud 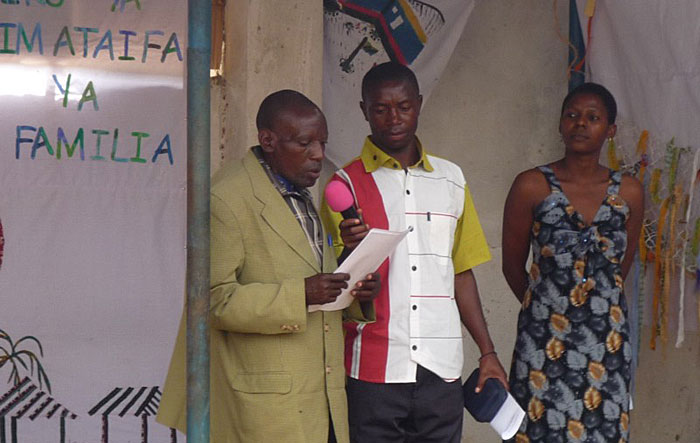 “People called me a sorcerer because I was so poor”

For years, people ignored my family and looked down on us in our neighbourhood of Bukavu in the Democratic Republic of Congo where we live. People even called me a “sorcerer” because I was so poor. I didn’t have anyone to talk to.

Then one day a group of Tapori children and their group leaders were brave enough to come and see me. They rallied children, teenagers and neighbours to build a house for my family. (Tapori is the children’s branch of ATD Fourth World.)

I named it the “Joseph Wresinski House” because he is the reason that I’m what I am today.

ATD Fourth World dried my tears of shame and humiliation. Nobody had come near me for a long time. I had lost all hope in life. I couldn’t find clothes to wear. No one respected me because I was useless.

The Tapori children and adults allowed me to escape my isolation and today I’m a man amongst other men.

I became the first member of the “Supportive Families”* group. When they started having their monthly meetings at my place, my neighbours started to come too, talking with me and asking for my opinion. That made me proud once again, and took away the fear and shame I once had.

I was accepted for who I was in this group. They let me speak, in spite of my limitations, and they listened to me. That made me appreciate life once again and little by little, I recovered my lost dignity. We all put our ideas together and that helps us all. We smooth out hard times together and share our moments of despair, as well as our moments of joy.

Yet, I’m still poor from a material point of view. Sometimes we can only eat once every three days, just enough to live. But I feel rich in other ways. Children no longer throw stones at my house.

Then the parish put me in charge of a church water fountain. This enables me to be in contact with a lot of dads, mums and children. And at the end of every month, I give the financial report to the parish.

When I got back from a meeting in Tanzania with ATD Fourth World, everyone called me “Papa.” I’m very proud, and it’s a great source of pride when people call you “Papa.” I feel like I’m everyone’s Papa.

And then they wanted me to become a member of the coordinating group for ATD Fourth World Friends in Bukavu. I never thought I could do something like this. I feel like I’m someone.

And whenever I see people who don’t leave their homes, I ask them, “Why are you all alone? We’ve got a group that struggles against the violence of extreme poverty. Instead of staying at home alone, you could come and listen to what we have to say in the group.”

*Supportive Families began with the idea that “someone who’s poor is a friend of someone else who is poor”. The group brings together people who are isolated, often because of an overwhelming sense of shame. Everyone does something, for example helping people to take care of their health. Group members help others to rebuild their houses, or visit people who are alone in prison. The group’s work is based on two strong convictions: “Not leaving anyone behind” and “Using the intelligence everyone has to combat extreme poverty”.