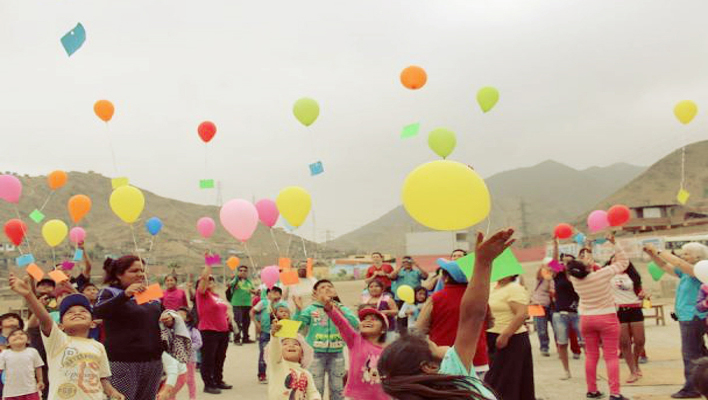 Each year on October 17, the World Day for Overcoming Poverty, citizens across the world and across socio-economic backgrounds gather, motivated by the conviction that we must unite with and be guided by the strength and intelligence of those living in poverty if we truly want to build societies that are just, cohesive, and peaceful. Since the first historic October 17th in 1987, Joseph Wresinski’s affirmation still mobilizes us:

“Wherever men and women are condemned to live in poverty, human rights are violated. To come together to ensure that these rights be respected is our solemn duty.”

Today, thousands of people around the world continue to gather in homage to the life and the struggle of those who suffer from extreme poverty, lifting up their voices and experiences to mobilize others.

“I would like to be an ambassador for ATD Fourth World,” said an Eritrean woman welcomed by ATD members in Great Britain. Her words remind us that we gather together because what we want, wherever we may be, and elsewhere as well, is for no human being to be excluded. May we truly leave no one behind. We come together precisely in order to learn from those who, because of their suffering as well as their hope, want most that the world become a better place. It is with them that we can achieve the peace that the world so needs — because, beyond bitterness, they draw hope and strength from solidarity.”

In Latin America and the Caribbean, statistics allow for a degree of optimism about eradicating poverty and reducing inequality. However, the 164 million people in poverty in the region, according to the United Nations Economic Commission for Latin America and the Caribbean, represent 164 million reasons to be motivated by the slogan of this year:

“Building a Sustainable Future: Coming Together to Eradicate Poverty and Discrimination.”

As in other parts of the world, in Bolivia, Brazil, Colombia, Ecuador, Guatemala, Haiti, Honduras, Mexico, and Peru, friends and members of ATD Fourth World have organized to reject the inevitability of extreme poverty. Often in solidarity with other associations, they do this through cultural and commemorative events, forums, discussions, video screenings, shared meals, or photo and painting exhibits. In neighborhoods, city centers, or with decision-makers, they have brought together children and adults to say that it is possible to build a sustainable future.

“Our children give us strength and push us. We don’t want them to feel the need to go to another country to find a job. We aren’t the only ones who struggle. We know many families who fight every day to have a better life.
Living in extreme poverty is not only a lack of money. There are families here who don’t have electricity, sewers, or any basic services…. Nobody asks for their input. People don’t listen in school, in the hospital…. There is discrimination.”

“In my community, I do my best so that my neighbors will sit together. Only then can we do things for the good of all. For example, we can have a place for children where they can read and share, and spend time together.” “Many people die of hunger. We used to be able to afford to eat. Today, however, the price of staples has increased so much that we can not even buy a potato in the market. We ask the state to invest in agriculture.
To the mothers living in the same situation as us, we say that they aren’t alone. October 17th is very important in our lives. It is the day in which we can make our voice heard in society. Nobody likes to live in misery. If the entire society joins us, they will listen and become aware of what we endure, and our situation can change. “

“Families from the small village of Percca, as well as from the large community of Cuyo Grande, have joined as one and with one idea: to walk together in the search for greater recognition and respect for human dignity. During our seven-kilometer march from Percca to Cuyo, we sang songs of courage and hope. To finish, we shared our ‘cocahuis,’ by having each family bring a meal from their daily lives.”

“In our Education Unit, we have many needs. We have no bathroom, we lack furniture. We have to conduct classes in hallways. Rooms are too small to accommodate twenty children. Children are not fed…. How can we demand quality education? When we don’t have all the conditions to pursue education, teachers have to be creative. We adapt to what we have. And we teach children solidarity.
We adults can make ourselves heard if we have problems, but how can children be heard? It is outrageous to see poverty. As educators, we try to defend the struggle for quality education.” “When we stop looking at our neighbor as just another person and we see them as we see ourselves, then there will be no more poverty. The change is inside us. “

Beyond October 17, members of ATD Fourth World join in the daily struggle to overcome extreme poverty, reflecting together and inventing and constructing a better future. This year’s World Day for Overcoming Poverty was held after the adoption of the new Sustainable Development Goals, in which member countries of the United Nations pledged to “end poverty in all its forms everywhere” before 2030. ATD Fourth World contributed significantly to creating this new development agenda and is committed to continue working in collaboration with other stakeholders, primarily those living in poverty.

“I am a activist for the movement of ATD Fourth World. Let’s move forward!”

So, together we say: Let’s move forward!