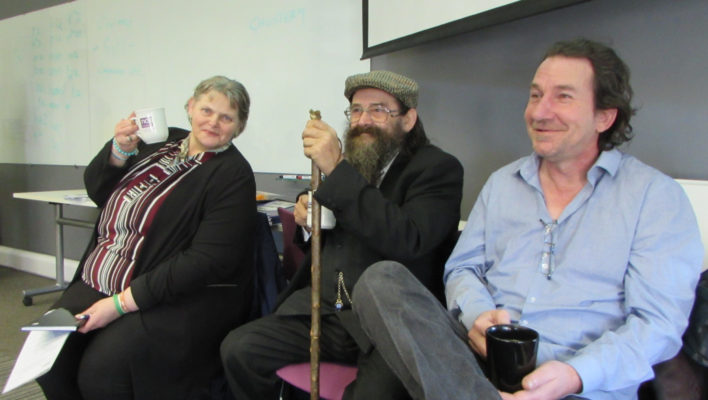 In this interview, Amanda Button and Thomas Mayes of ATD Fourth World UK, speak about the APLE (Addressing Poverty with Lived Experience) Collective, a UK network of individuals who experience poverty working together with organisations that support them to take positive action to eradicate poverty.

An Interview with Amanda and Thomas

Q: Both of you helped to start the APLE Collective. Can you tell us about it?

Thomas: APLE is a place where people aren’t judged for the experience they have. All of us have an understanding of what poverty can do to your life. Lived experience is important because without hands-on experience, you don’t fully understand what you’re learning.

Amanda: We’re a network with shared values. We’re grassroots and have lived experience at the heart of everything. On our website we say why having direct experience is important, and also that “having a lone voice without support is difficult”. That’s why we’re a collective.

We have a wealth of knowledge and experience because we come from such different backgrounds and different races. Some don’t have English as a first language. One of our shared values is to be non-judgmental and to treat each other as we expect to be treated ourselves, with dignity and respect.

‘We don’t just preach; we learn alongside’

Thomas: Even when people don’t share our values, you can still learn from them. It’s hard to change someone’s view. I think it’s better to aim at improving things bit by bit. It’s like in a company: you can’t make changes without retraining the entire staff; but you can always make improvements. So in APLE, we don’t just preach. We want to learn alongside people. They might be outside people who are professionals. We can grow together. That’s something we have experience of with ATD Fourth World. We go to train social workers so that they can learn from our lived experience of poverty.

Amanda: An important priority for APLE is coming up on 17th October. That’s the United Nations Day for the Eradication of Poverty. Every year APLE aims to light up the UK map on that day by bringing the voices of people in poverty into the public eye. All the organisations that are part of APLE hold events on that day and give links in the APLE website and on Twitter with @ApleCollective.

Q: APLE is also working on the digital divide. What is that about?

Thomas: We see the digital divide in schools. When the lockdown started, my daughter’s school handed out tablets where their assignments get sent. But the posh school down the road made sure its students all had laptops.

The problem with tablets is that when they have online classes, students with laptops are using the chat to type in the answers to the teacher. But on the tablet, everything is so small that my daughter can’t see what she’s writing and there’s no way to make it bigger on the screen. So she doesn’t join the online class at all any more. She just does the reading on her own, then writes her answers into the exercise book, and then takes a photo of her work to turn it in.

It’s not the same as what other kids are getting. They’ve also told us that the tablet will have to be returned to the school when lockdown ends. I don’t know what they’re gonna do with them all, but they don’t want the kids to keep them. It makes no sense because surely they’ll still need the internet for homework after this crisis.

Amanda: You let kids have just a taste, but then you’re snatching it back.

Q: What about before the pandemic? How did you see the digital divide then?

Amanda: Some high street phone shops already had policies saying “no cash allowed”. You’re supposed to be able to use cash everywhere, but actually unless you have a bank card, you’re out of luck. And that matters if you want to buy a smartphone with a contract for data. Unless you have a bank card, you have to go to dodgy shops that try to sell you broken phones. And you have no choice but to buy data on pay-as-you-go plans that cost a lot more than having a contract.

Thomas Mayes has been part of the board of directors of ATD Fourth World UK since 2014. Amanda Button has been part of the support team for ATD Fourth World UK’s National Coordination since 2019. Together, they were among the co-authors of The Roles We Play: Recognising the Contributions of People in Poverty and among the co-researchers of “Understanding Poverty in All Its Forms”. Together they wrote about the ethos behind ATD Fourth World’s work. This interview was originally done at the request of Turn2Us.

This article was originally published on ATD UK’s website.