Making Human Rights Work With And For People In Extreme Poverty 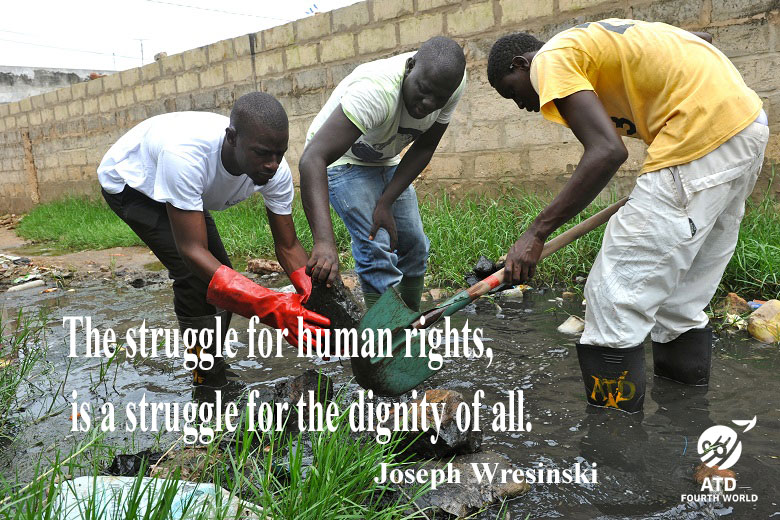 “Your manual shows us a new way to govern that is not taught anywhere else – how to include people living in poverty in decision-making processes….I have now realized that it is us, the decision-makers, who are responsible for the misfortunes of the poorest. We must recognize that without them, there is no way forward.”

This was the reaction of a Cameroonian parliamentarian to the manual prepared by ATD Fourth World and Franciscans International entitled “Making human rights work for people living in extreme poverty.” Launched in September 2015, the handbook is already proving to be an invaluable tool for explaining in clear and simple language the specific implications of human rights for people who have been marginalized by the rest of society. And because it puts forward concrete ideas for advancing their rights, it is now being used by people within academia, civil society organizations, as well as government institutions and services. In Cameroon, in addition to working with the National Assembly’s Human Rights Committee, the ATD team in partnership with Plan International is providing human rights education for one hour a week in 6 schools, and in cooperation with Caritas, is sensitizing religious institutions to a human rights approach to poverty eradication. The ATD team has also introduced the manual to 11 NGOs who work with prisoners. Afterwards, the chaplain who initiated the workshop declared: “We need to have more of these sessions, and in the future include the prisoners as well. They are here because they don’t know about nor respect human rights. The fact that a minimum of rights are not guaranteed for all citizens makes all of us potential prisoners. “

In Senegal, a four-day workshop attended by representatives of 10 ministries, local government staff, religious institutions and NGOs has led to the creation the Fédération nationale de lutte contre l’extrême pauvreté in close collaboration with the Ministries of Health and Local Governance, and with a direct link to the Ministry of Urban Renewal.

Likewise, in Ireland, the largest NGO, the Society of Saint Vincent de Paul, will use the handbook to incorporate a human-rights-based approach into their work, which to date has been shaped by the concept of charity. The handbook has also proven of interest to people in academia. Professors in a variety of fields in Canada, Mauritius, the Philippines, India, and South Africa are using sections of the handbook in their classes, and in the UK, the team now has an ongoing relationship with the University of Sheffield’s Sociology Department.

The fact that the handbook was developed in partnership with Franciscans International and with the input of other NGOs has also opened up possibilities for joint activities – which can be less daunting for local teams. ATD and Caritas together organized a one-day workshop for the Indian Ocean region, attended by government and civil society representatives as well as people living in extreme poverty. As a result, the Department of Social Studies of the Institut Cardinal Jean Margéot has reprinted 200 copies of the handbook for use with their students, and a four-page summary of the 14 proposals put forward during the workshop is being circulated for discussions by all participants on the best way forward.

In the Philippines and Bolivia, ATD was invited to participate in workshops organized by the Franciscans. Both workshops opened up opportunities for new partnerships with other organizations.

The handbook is also proving useful in generating new ideas for action within ATD Fourth World. In Switzerland, the ATD team used the handbook to help shape their input into the national conference to evaluate the government’s anti-poverty strategy. They particularly drew on the suggestions on the right to participation. And in the USA, the group of adult activists in New York were inspired by the handbook to meet with a member of the State Assembly, who agreed to attend a People’s University next year (possibly on the subject of housing). The team explained that the meeting will follow the format spelled out in the handbook in order to allow an open and frank discussion with people living in extreme poverty.

The handbook has thus proven to be an invaluable source of information and inspiration on the many actions that can be taken to improve the conditions of people living in extreme poverty. Over and over again, the participants in the workshops and presentations that have been organized have indicated that the handbook has changed the way in which they look at people living in social exclusion: they now see them as people whose rights are being violated, and who have the potential to become actors of positive change if provided with the right kinds of support and encouragement. They have thus come to understand the reason why it is important to distinguish between poverty and extreme poverty. And they see that it is only through a human rights approach that extreme poverty can be eradicated.

That change in perspective seems to be lasting. In a follow-up session held one year after the Haiti workshop in November 2015, the participants – which included representatives of government, the media, and NGOs – confirmed that their approach to extreme poverty has been transformed.