From Stranger to Neighbour: Building Peace in Fearful Times 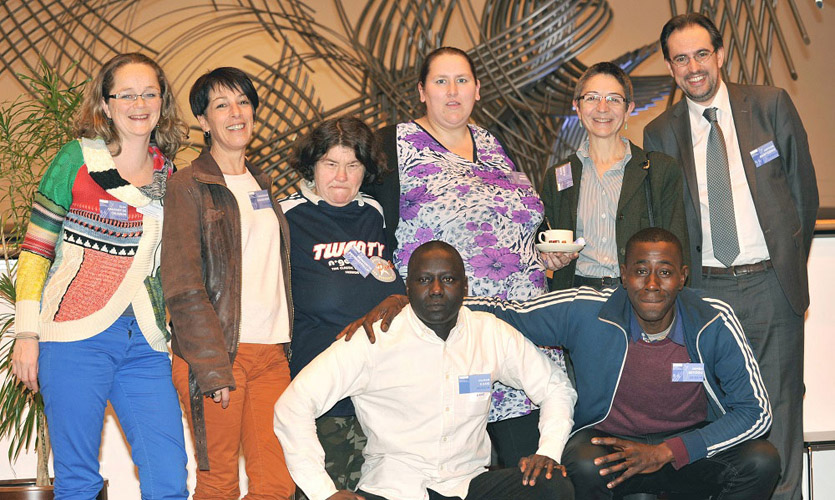 Written in close collaboration with people living in poverty around the world, Understanding the Violence of Poverty looks at the many kinds of violence they experience.

This excerpt describes the ATD Fourth World People’s University, held in many countries. These meetings give people from different social and ethnic backgrounds a chance to exchange ideas, opening doors to the mutual understanding needed to overcome violence.

Understanding the Violence of Poverty is the third volume in the Artisans of Peace Overcoming Poverty series. It can be purchased on Amazon as a paperback or can be downloaded for free as a pdf.

Here is a short excerpt from chapter 3, “Diversity and Exclusion in France and Belgium: Building a Sense of Belonging”.

People in poverty are frequently treated as less than human. Despite this, they often reach out in solidarity to others who are different from them, demonstrating a tremendous generosity of spirit. ATD recognizes and supports this solidarity through its Fourth World People’s Universities.

In the current context of rising diversity, tension, and misunderstandings, it can become harder to perform the everyday acts that create fellowship in society. Yet, some people in poverty use their own experience of hardship to reach out to people of different ethnicities. In France and Belgium for example, native-born participants in the People’s University are joined by immigrants from many African and European countries, Guadeloupe, Haiti, Serbia, and Viet Nam, as well as members of the itinerant Roma population.

One unemployed Belgian man related that because bus riders make fun of his clothes, he prefers to walk. Every day, he passes a North African man whose job is sweeping the street. The Belgian said:

“I decided to greet him. But when I said, ‘hello’, he didn’t answer. I could have done what some people do by blaming foreigners for taking jobs that I wish I had. He didn’t even answer me. But then I realized that sometimes I don’t feel like answering my own children. Maybe the man is having a bad day. Maybe that very morning, he learned that he would soon be out of work, or was insulted by his boss. Or a passer-by was rude to him, so that’s that. It happens to me too. When someone treats me that way, at home I just can’t treat my kids well. They’re asking for attention, and I don’t answer. So I won’t judge him for it.”

This father tried to connect with a neighbour, and then worked to understand why his greeting remained unanswered. The harshness in his own life has led him to close himself off sometimes too, but also to understand that others do the same. By not judging the neighbour, he chooses to keep open the possibility of connecting in the future.

At the same time, despite frequent acts of solidarity, when life is hard and everything is lacking, it can be particularly difficult to summon up feelings of fellowship. […] People put into [difficult] situations may sometimes hold racist views that are rooted in pain, insecurity and fear. In this context, the Fourth World People’s University offers a framework for beginning to overcome both racism and poverty by providing a forum where neighbours can discover what their struggles have in common.

“As they speak out, people gain self-confidence, which makes it possible for them to speak to ‘the other’, who gradually becomes less of a ‘foreigner’ on whom we can project fears, and more of a familiar face. People have prejudice fed by racism in society, but here they begin working on their own prejudice.

Indirectly, this work is part of overcoming racism with people of very different backgrounds. […]”

In the face of terrorist attacks, the world is building more and more walls. Around the world, people suspected of being a danger to others are frisked and harassed, treated with disrespect, indignity and worse. But barbed wire and gated communities make all of us less safe. Every tool designed to protect the security of some at the expense of others ends up eroding the human relationships that are our world’s greatest treasure.

Article Photo: Delegates from Belgium at the 2014 Fourth World People’s University at the European Parliament, as shown in chapter 3 of “Artisans of Peace Overcoming Poverty – Understanding the Violence of Poverty“.