Mass Resettlements in the Philippines: Mutual Support Among Families 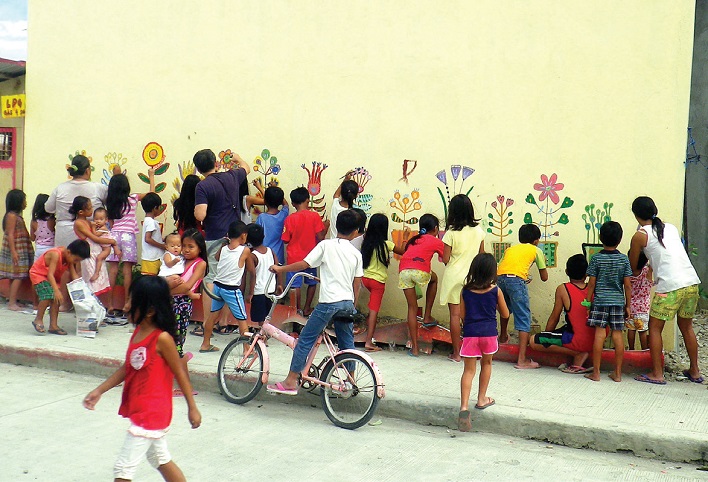 This article is excerpted from Volume 2 of Artisans of Peace Overcoming Poverty.

Thousands of families in the Metro-Manila area are being relocated by the government to areas outside the capital. One of the communities targeted for relocation was located under a bridge where ATD Fourth World has been running Street Libraries since 1989. Eighty of these families were relocated in 2014. This meant overcoming significant challenges in the preparation phase, as well as since relocating in order to find ways for each family to adapt to the new circumstances. ATD’s priority has been to support the existing solidarity among these families, with particular attention to those facing the biggest challenges.

After several waves of resettlements since 1992, in 2012 the Department of the Interior and Local Government targeted 20,000 families to be relocated. The process is still ongoing as part of a plan to clean polluted urban waterways and to move people from dangerous locations that often flood. As global warming causes the sea level to rise, floods worsen and mass resettlements will continue to be needed in the Philippines.

The most critical challenge for families being sent to less populated areas that are completely new to them is finding new ways to earn a livelihood. When living under the bridge, most of them previously sold small items to passers-by driving over the bridge. Because they now live in places with no passers-by, in many families, one bread-winner must return to Manila to have any hope of earning money. However the distance and cost of the commute mean that those who earn the least may not be able to return home more than once or twice a month.

Preparing to Be Relocated

The first difficulty for each family is to obtain all the administrative papers needed to be eligible for the resettlement. This has a cost: $4 for some certifications, which is a major expense for families barely scraping by. It is also challenging for parents with weak literacy skills to ensure that the birth registration papers they are issued contain no errors.

Depending on which of several sites they would be sent to, families were grouped together to be resettled on one specific date. However, several of these dates were rescheduled several times without explanation. The consequences of this could be heavy. For instance, one family did not enroll its children in school at all for their last year under the bridge thinking it would be better for them to begin after the resettlement—which was repeatedly delayed.

The complexity of the administrative process and many inconsistencies in the available information about different sites made it hard for each family to be housed in the site they wanted to choose. Neighbors and extended families who had hoped to be resettled on the same site now find themselves scattered across four different sites. The distances separating them — from 25 to 70 miles — can take three or four hours to travel by transferring from jeep to bus to pedicab to jeep. Families who were not able to move on a specific day often had no choice but to change sites. One woman whose entire folder was lost by an implementing agency was not allowed to move on the same day as her sister’s family. She was required to resubmit everything, and by the time that was done she was not allowed to move to the same site.

Hunger as an Obstacle to Schooling

While the housing in the resettlement sites is less dangerous than the informal housing under the bridge, some of the families who struggle the most to find new livelihoods stopped sending their children to school after being relocated. Their main reason is not having enough food. They know that being hungry keeps the children from learning. They also know that their children will feel ashamed if others in school see that they have brought nothing to eat.

Costs associated with schooling are a significant issue. While there are no fees to register, families must pay for uniforms, shoes, notebooks, and food. Before the resettlements, some families were receiving scholarships for all these costs from private non-profits. However most of these scholarships are reserved for children in specific districts, and are thus lost when a family is resettled.

The families who are having the hardest time earning money in their new homes can also find themselves facing a painful choice. If their older children are able to earn money, it may make sense that they help to put food on the table for the younger ones — even when it means leaving school much too early.

In addition to having moved away from their previous livelihoods, each household now needs more money for increased expenses in the resettlement sites. In the informal housing under the bridge, they paid no rent. Water was free and nearby, and electricity was purchased only when people could afford it. In the new sites, each family has a mortgage payment to make. Water is expensive, and often must also be pumped and carried. The only way to access electricity is by making regular payments.

In some sites, refrigerators are not allowed at all, even though they could help a person who sells food to store unsold items for the following day. One woman explains: “I sell different vegetables and soup. I travel every day to buy them in the market. But I spend $2.25 every day, and sometimes earn only 45 cents. Sometimes I don’t sell everything because the people have no money to buy. And yet it’s important to go every day to the market because there is no refrigerator to keep things cool.”

It is hard to sell food or small practical items in places that are sparsely populated, far from the market, and in areas that lack job opportunities. Some jobs are proposed for further construction of the sites, but not everyone is qualified to do this work.

During the commemoration of the World Day for Overcoming Poverty in October 2014, several community members spoke about helping one another out:

“We know well how to pay back our neighbors for help we receive: when we have no money, we give rice or onions, or we propose services, such as getting water at the pump for them.”
“All of us here in the relocation site get a share when there is a little ‘blessing’ that arrives, even if it’s only little. Somehow we manage to get by.”
“All of us help each other, not only financially but also by giving good advice.”
“I also run errands for neighbors, like going to the market for them. Then they give me some money or some of what they have bought.”

There is existing solidarity among community members. This should be better known and supported by every public agency or non-profit that intervenes in the resettlements.

Some of the strongest families have been able to thrive following their resettlement. However, there are others for whom starting over from scratch is proving too hard. In previous resettlements, families who could not find any new way to earn money ended up returning to Manila. However, this made them ineligible to ever be rehoused again. And in this case, each family was required to demolish their home before being allowed to be relocated. So what options do they have?

People living in poverty are strongly affected by the consequences of climate change. With little choice about their housing, they live in areas that are particularly vulnerable to natural disasters, as in Manila. They also lack protection against the impact of flooding and other disasters. This means that resettlements will be continuing, in the Philippines and elsewhere. Based on the experiences of these eighty families, ATD recommends that for future mass resettlement, the preparations include:

People who have been relocated in the past, whether or not their experience was positive, have knowledge about how these processes can be improved in the future so that, despite the profound challenges facing society, no one will be left behind.