Muted Voices: A Dialogue About Women, Poverty, and Human Rights 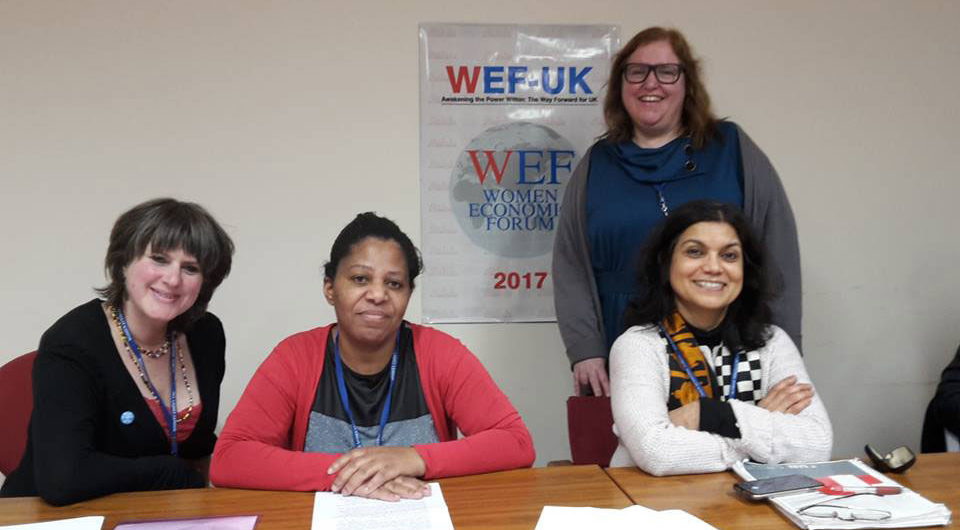 “Everybody has a right to be heard. Sometimes, though, you try to express yourself clearly, but the right words just won’t come out. To have a voice, you need to have the opportunity to meet other people who respect you. The “Roles We Play” project gives people a voice and the chance to share the different stories that they have. The project tells people that each life tells a different story. We’re people; we’re not just a number.”

These words from Angela were part of a panel called “Women, Poverty, and Human Rights” during the Women Economic Forum-UK held at London’s Bhavan Indian cultural centre on 1 February 2017. Diana Skelton, one of ATD Fourth World’s Volunteer Corps members, chaired the discussion and elaborated on the conditions necessary for people’s voices to be heard. She said:

Some years ago, a woman living in poverty had prepared to attend a meeting on poverty at the United Nations. She had quite a lot to say about the harsh conditions her children were enduring at the time. However, when a journalist came up to her, his first question was, “If this meeting is about poverty, why don’t you look poor?” Hearing that question made it impossible for her to speak to him. She didn’t want to tell him that she had borrowed the dress she was wearing so that she could feel proud to walk into a prestigious place like the United Nations with her head held high. His expectation of people in poverty trapped her in a stereotype, instead of giving her the opportunity to speak about what her experience had taught her.

Another way that people in poverty can have their voices muted is when they are asked to speak in a manipulative way. For instance, children who live in the street in West Africa are sometimes interviewed by journalists. A journalist may treat several children to a meal in a restaurant in exchange for their life stories. But with such a big power differential, the children can sense quickly that they owe the journalist a dramatically told tale. What they say in that situation may or may not be factual. And either way, the child may later think, “By speaking about my family to a stranger that way, I have brought shame on them.” Some children regret their words so much that the interview becomes a reason for them never again to return home. Recognizing the human rights of people who live in extreme poverty requires creating an equal footing where each person can prepare and feels free to express what is most important to them. ATD and several other non-profits have created a tool to help everyone do this. It is called “Making Human Rights Work for People Living in Extreme Poverty: A Handbook for Implementing the UN Guiding Principles on Extreme Poverty and Human Rights”.

Another speaker was Carrie Supple, director of Journey to Justice. Her organisation uses the power of music, poetry and other arts to bring alive the history of human rights movements in order to inspire and empower people today to take action for social justice. The Journey to Justice travelling exhibition tells little known stories of people involved in the US civil rights movement and makes links to historic and current UK movements for change. Working particularly with young people and schools, this exhibition has already been shown in Newcastle, Sunderland; South Yorkshire; and East and South London. It will open in Nottingham on 1 April. Carrie said:

We emphasise the power of untold stories of people who take part in struggles for human rights – we can see ourselves reflected in their experiences. We work mainly with people who are vulnerable or in poverty. Important issues include how to build solidarity, cross-party, and collective and individual responsibility. We need a balance of men and women. As said by Fannie Lou Hamer, the sharecropper and civil rights leader, “Nobody’s free until everyone’s free.”

Dr. Meera Tiwari of the University of East London spoke about the fact that education for women can dramatically improve health outcomes for their children. However, one of the challenges is that many women in poverty do not consider themselves as valuable people worth educating. She was quite struck on a visit to India when a woman answered her knock at the door by saying, “There is nobody here”, as though her own existence was of no importance to anyone. She cited a new study showing that “Expectations of brilliance underlie gender distributions across academic disciplines”. Meera said, “These expectations are created when we tell our children that a successful man is brilliant; while a successful woman ‘must have worked very hard’. We need to change that mindset.”

The final speaker on the panel, Santosh Dass, spoke as the founder and vice chair of the Anti Caste Discrimination Alliance. She spoke about how Caste-based discrimination exists in the UK—but is not considered under the Equality Act of 2010, which lists as “protected characteristics” both race and gender, but not Caste. Santosh gave the concrete example of an elderly Indian woman living in the UK who was treated with neglect by her home health care aide because of her Caste, but who had no legal redress under that act. She said, “To me, it’s clear and simple. If we have laws in the UK to protect vulnerable people from other types of discrimination – based on age, disability, gender, race and sexuality – why not protect against Caste-based discrimination? […] Legislation can provide prevention – particularly for those who are not able to engage in dialogue to make things better as some would suggest. Legislation tends not to divide communities; it can help reinforce good practice and behaviours.”

Here are links to the full speeches of: