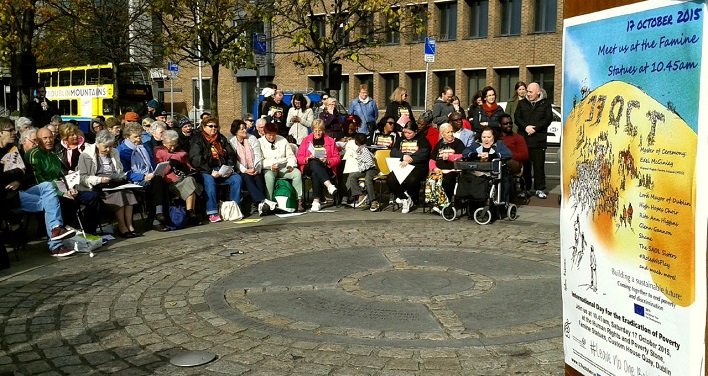 A New Humanity Without Poverty Will See the Light of Day

The very poor tell us over and over again that a human being’s greatest misfortune is not to be hungry or unable to read, or even to be without work. The greatest misfortune of all is to know that you count for nothing, to the point where even your suffering is ignored. The worst blow of all is the contempt from your fellow citizens. For that contempt stands between a human being and his rights. It makes the world disdain what you are going through. It prevents you from being recognized as worthy and capable of taking on responsibility. The greatest misfortune of extreme poverty is that throughout your entire existence, you are like someone already dead.

Present at the heart of this World Day for Overcoming Poverty are all the people who are facing the violence of extreme poverty. Marked by deprivation and contempt, many flee from place to place driven by armed conflict, drought, floods, and hunger. What support do they find?

International borders are closing ever more tightly; actual walls and invisible barriers divide neighbourhoods and communities; concerns for the security of some people end up condemning others to absolute insecurity. Seeking a new chance, many people risk their lives and disappear without a trace. Meanwhile, prejudice and fear shape public policies that treat human beings as suspects or as objects of charity, instead of as people who have rights and responsibilities. The world needs the experience of people whose lives are forged by courage and patience as they seek out pathways that will bridge divisions and lead toward peace.

“In deep poverty, you’re just a shadow of yourself,” says a father in Germany. “To get out of poverty, you’ve got to jump over your own shadow. But that means that you need someone next to you who believes in you more than you believe in yourself.”

In the Democratic Republic of the Congo, Ms. Louise explains: “With ATD, no one gives us money, but as a movement we find intelligence that helps us get out of poverty. Our goal is to find the person who is the most stuck in poverty. We see him and speak to him, saying, ‘Stand up tall; you have the strength to do it.’ I teach him to carry packages as I do, and we continue by working together. We manage so that no one is left behind. If we applied this approach everywhere, there would be no more poverty in the world tomorrow.”

The struggle continues for the dignity of all people to be recognized. In a run-down housing project in France, some neighbors came together to make peace by repainting a stairwell where one of them, distressed by too much suffering, had scrawled offensive graffiti. In Guatemala, parents in poverty found the strength to talk to teachers and to a government minister in order to obtain a national law banning fees for public schools.

Around the world, at the initiative of ATD Fourth World, thousands of people with first-hand experience of poverty have come together. Joined by public officials, grassroots community workers, and academics, they are merging their knowledge. Their work influenced the United Nations’ Sustainable Development Goals, in which heads of state made a commitment to ensure that development will “leave no one behind.”

This path to free humanity from poverty is a long one. But we are moving forward as long as we continue to believe in people, and as long as we come together to learn from those who cope with extreme poverty every day and who refuse to let anyone be scorned or humiliated. Joseph Wresinski set us on this path with determination. Like him, we continue to believe that “a new humanity without poverty will see the light of day because we want to make it happen.”