Words Can Change the World 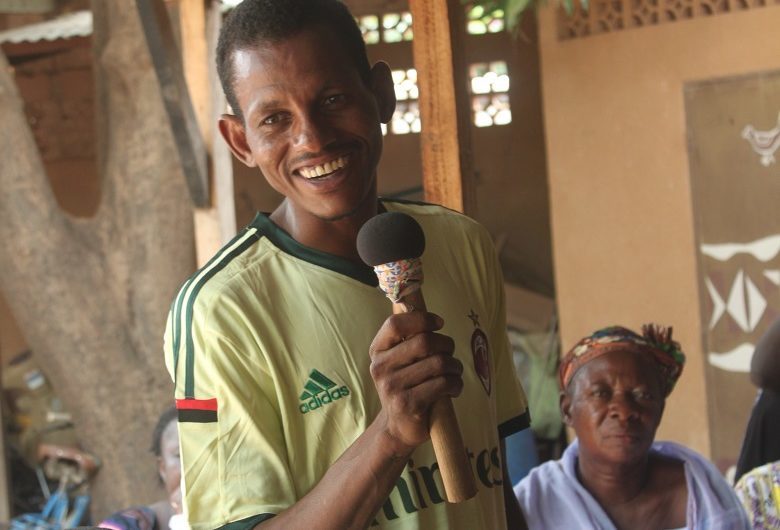 “Some people try to win by using guns and bullets. ATD Fourth World is armed only with words, but words have the power to change the world, to reach presidents and to make them think.”

In Burkina Faso, the loss of a simple identity paper can cause a cascade of problems, especially for people who already face many difficulties in their lives. Some people think that getting replacement papers just takes a quick errand into town, but the reality is that it’s not that simple. At a recent meeting in Burkina Faso, people living in poverty explained why to government officials.

For many years in Ouagadougou (the capital of Burkina Faso) ATD Fourth World has run a centre that serves as a gathering place for people trapped in extreme poverty. At monthly meetings in the centre’s outdoor courtyard, people share ideas about improving life in the community. These “Courtyard Meetings” take place over coffee with lively banter among friends. But a long time attendee, Mrs. Bintou, explains that these gatherings are more than just getting together to chat.

“Some people make fun of us when we come here. They say we’re wasting our time and we’re not earning money. But…we know we are not wasting our time… These meetings help us grow by listening and learning.”

However, some who come to the Courtyard Meetings have complained about the limited impact of these gatherings, saying things like “Our ideas are important but no one hears us outside this courtyard!” So, for several months now ATD Fourth World has found new ways to communicate the ideas of people trapped in extreme poverty to government employees in a position to make a difference. Now, the Courtyard Meetings happen at two levels. First there is a preparation meeting during which people who live in extreme poverty examine a particular topic such as identity papers. Then the group invites other people to engage in a conversation about that issue. These could be government officials or others who have expertise in that area. The process is planned and then evaluated by a small ATD group that always includes an activist who lives in conditions of extreme poverty.

In early 2016, three meetings looked at the problems people can have related to their official identification documents. Why do so many people lack official ID of any kind? What difficulties do they encounter when they try to obtain ID? How do people manage without any official ID? After discussing such questions, the group met with two government officials involved with these issues: the head of the civil service and the president of the city’s 4th Precinct Court of Justice.

This second meeting began with a skit called “A Story About Papers.” Two men are talking. One tells his friend about a man who was killed in a street fight. Because he did not have identification documents, no one knew where to find his family and he was buried “like a sheep.”

“So if you don’t have ID papers, it’s a big problem!” the man concludes.

“But why didn’t he have any papers? Did he have something to hide?

He was probably a criminal or a thief!” his friend objects.
The first man is silent a moment, then admits, “I don’t have any ID either. Last September when we had heavy rains, I lost all my documents—that’s how my problems started.” He explains how he had to lie to his employer and couldn’t sign his children up for school.

“For seven months you didn’t do anything to get new papers?” his friend asks, incredulously.

“I haven’t gone to the village for a long time so I was ashamed to go there for that, never mind any police check points I might run into on the way there.”

“Give me directions to get there,” the friend replies. “I will go ask your father to give you your birth certificate.”

This skit laid the groundwork for the meeting. In fact, negligence usually is not the reason that people with difficult lives do not have identification documents. Attendees described all kinds of obstacles.

“I am afraid to go to the police station to ask for identification papers. I am worried a police officer will say ‘Oh, you again!’ and humiliate me in front of everyone.”

“If you have money, they take care of you right away. But if not, they say ‘come back tomorrow’. You get tired and decide not to go back.”

“It is humiliating to go to the police station where everyone stares at you.”

Not having identification papers has a major impact on people’s daily lives:

“You are always afraid every time you go somewhere.”

“If you don’t have papers you can’t go into town!”

“If you have an accident, no one knows who you are or where you come from.”

“You get picked up and arrested.”

“It is impossible to register your children for school.” The two government officials responded by explaining what the law says and how to go about getting identification papers. The conversation that followed was animated. Unfortunately the real barriers that people in poverty face when trying to get an ID go beyond simply what the law says. Often the first obstacle is the humiliation they experience from government officials.

Nevertheless the meeting did provide the opportunity for an exchange between people who otherwise would never have met. The Precinct Court of Justice president affirmed, “I have learned many things here this morning”.

And a Fourth World activist added, “Distance creates misunderstanding. We don’t understand each other because we never talk together.”

These Courtyard Meetings in Burkina Faso provide a forum for diverse groups to discuss concrete issues in an atmosphere of respect. As one participant explained, “We don’t just tell people what to do. Our goal is to change people’s hearts, which is a long process, but a necessary one.”

Encouraged by this first series of meetings, members of ATD wrote what they want to say on October 17, World Day for Overcoming Poverty. This year has a fitting theme, “Moving from Humiliation and Exclusion to Participation”, exactly what happens at the Courtyard Meetings in Ouagadougo every month.