Participation: What a Day to End Poverty Can Accomplish | Isabelle Pypaert Perrin 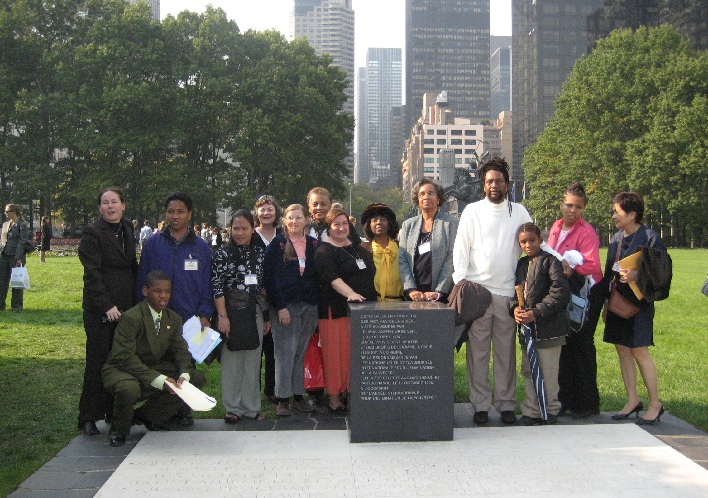 Text of an address  by Isabelle Pypaert Perrin at the event “Participation: What a Day to Eradicate Poverty Can Do”, on 12 July 2017 at the United Nations in New York. This was a side event in connection with the 2017 High-Level Policy Forum hosted by ATD Fourth World in partnership with the Permanent Mission of France to the United Nations, UNDP – UN Department for Social Policy and Development, the International 17 October Committee and several other organizations.

As you have heard from the previous speakers, and especially from Ms Broxton and Ms Tyre, participation can be a transformative tool at the United Nations. I will speak first about participation in general, and then about the unique setting of the International Day for the Eradication of Poverty, where participation can open the door to change attitudes and challenge discrimination.

Full participation is a right for any human being.

Full participation of the most excluded people should be a top priority, not only because ending poverty is a moral duty, but also because the UN General Assembly has called for it in the Guiding Principles on Extreme Poverty and Human Rights.

These principles, adopted by the UN in 2012, and the handbook based on them, spell out conditions that would enable people who live in extreme poverty to contribute to all aspects of our societies. They have the right to participate in all stages of developing policies and programs that affect them directly. This is necessary for policies and programs to improve and succeed in reaching the people who have been left furthest behind.

But most of the time, the people who experience poverty are not present to contribute to decisions that affect their lives and their communities. Their voices are missing; their knowledge is not recognized or expected.

“Even in extreme poverty, a person has ideas. If these ideas aren’t recognized, people fall even deeper into poverty.”

“What is it that makes us human beings? We have intelligence and we think; we have a voice and can communicate through language. We have emotions and we can show them. We have dignity and choice. Poor people are denied these intrinsically human traits; we are neither recognized nor treated as human beings.”

Joseph Wresinski, the founder of ATD Fourth World, was raised in poverty. He knew from his own life that this waste of human potential is unacceptable. He said that the poorest people are the partners who are absent from international institutions. To bring these partners to the table was his lifelong combat.

Through participation, this is gradually beginning to change. At the United Nations, people who live in poverty are invited more and more to come and speak personally. That can be positive.

However, all too often, these speakers are expected to disclose their most private experiences of suffering, and then to leave it to policy-makers to think without them about what changes to make and how to implement them.

If a speaker has personal experience of poverty, the listeners too often expect to hear only about that individual experience. But when labor union leaders speak, or activists for women’s rights, it’s understood that they are speaking for many thousands of people. It’s also clear that their goal is to speak not only about problems but also about proposed solutions.

People who experience poverty do more than share their personal stories about inhuman situations.

Growing up in extreme poverty gives people a unique vantage point on how to address it. When you see development programs come and go, you have knowledge about why they too often fail and why certain people are always left behind.

This knowledge is invaluable if we are to understand the way poverty is generated and to develop policies and programs to tackle it.

We should not forget that many conditions need to be met in order to enable people living in poverty to truly participate. When people in poverty have the opportunity to belong to a group or a movement where they feel free to speak their mind, where they have the opportunity to reflect on their lives and to prepare their participation together with others, they are ready to act as spokespeople in whom the others have confidence. They are informed by the experiences, and also the analyses and insights, of many others.

This is the kind of participation that can help us change the future together.

On October 17th, the International Day for the Eradication of Poverty, whether at the United Nations or in commemorations around the world, people who live in extreme poverty not only speak from the same podium as policy makers, but also have the leading role. They are the partners whose contribution has been missing.
Only with them at the heart of this international day is it possible to understand the barriers faced by people in extreme poverty, the hopes they have for the future, and the intelligence they can offer to society.

This international day is equally important for policy makers who have few occasions to meet people in poverty and to benefit from hearing what they have to say as partners. Last October 17th, Jan Eliasson, then the deputy secretary-general of the UN, called this opportunity “inspiring”. He told people in poverty:

“You [are] bringing life into this room! […] It’s so important that we connect those who are doing policy [with] the life of people.”

In order for this day to encourage and inspire all those who strive all the time to overcome poverty, whether by helping others in their neighborhoods or by designing polices, the conditions of participation must be respected.

It is not a day for policy makers to call to increase funding or for NGOs to raise their profile. This day is intended to promote dialogue and understanding between people living in poverty and society at large. “It represents an opportunity to acknowledge the efforts and struggles of people living in poverty, a chance for them to make their concerns heard and a moment to recognize that poor people are in the forefront in the fight against poverty,” said the secretary general in his report in 2006.

Today, “to leave no one behind” is an ethical imperative addressed to all of us, whatever our responsibilities. It also reminds us that eradicating poverty — and particularly extreme poverty — is a crucial challenge that demands long-term efforts and political will. We must keep in mind that this imperative is rooted in years of action, of academic research, and of seminars on extreme poverty and human rights; also of World Summit meetings on education, on social development, and on the environment, for example.

The celebrations of October 17th, year after year, have enabled more and more people and organizations to develop and explore what it means in practical terms to “leave no one behind;” and they have shown that it is possible.

Thirty years ago, on 17 October 1987, Joseph Wresinski founded the World Day for Overcoming Poverty, which led in 1992 to the recognition of October 17th as the United Nations’ International Day for the Eradication of Poverty. He called for all people to come together to honor the human dignity of people living in poverty and to fight to end the discrimination and social exclusion they suffer.

When we observe this day each year, we proclaim that never again should people be condemned to live and die in shame and humiliation.

It is a sign that we want to stand all together. It means that we all want the shame to end, that we want our society to be strengthened with the intelligence of the most vulnerable people. When people living in extreme poverty are invited not only to participate, but to play the leading role and speak in the name of many others, then we are contributing to the progress of humanity.