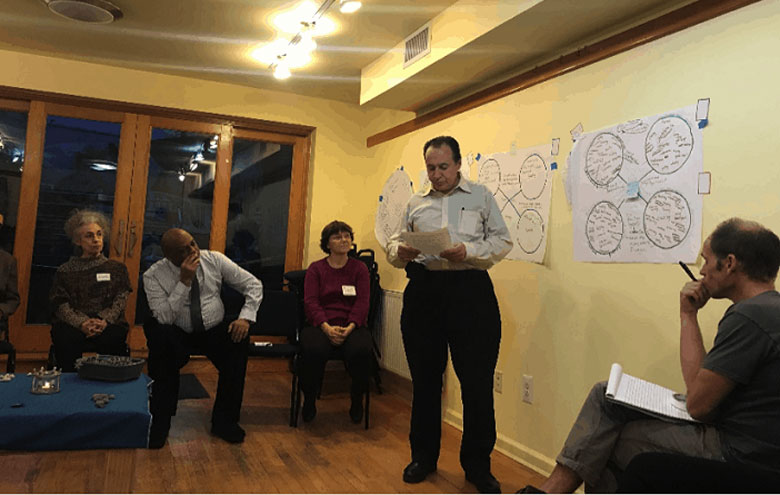 “When we’re homeless, we start losing the mind and don’t want to communicate with anyone.” “When you don’t communicate and you isolate yourself, it’s like you want to die.” These were two comments from a recent discussion in New York City on mental health and poverty.

Mental anguish is a key element of poverty, yet often overlooked in the rush to examine external factors such as income, housing, and employment. Last fall ATD Fourth World in New York City brought people living in poverty together with three mental health experts to talk about these issues in a Fourth World People’s University.

The Fourth World Peoples University (FWPU) offers a safe space for discussing topics related to poverty. Prior to the event, ATD Fourth World members met together to examine what they think about mental health and plan for a conversation with the invited guests. These included a psychotherapist with a specialty in alcoholism and addiction counseling. Also attending were a social worker who supports teens and a dancer who teaches movement wellness classes.

“Many of you say that poverty is trauma,” said ATD Fourth World Volunteer Corps member Virginie Charvon, as she introduced the meeting. “Poverty is trauma because every day you don’t know if you can feed your children tomorrow, find a job, or pay the bills. And sometimes it is like that day after day.”

ATD Fourth World members who have experienced poverty talked about how foster care, homelessness, and other difficult situations affected their mental health. They described how stressful it is to go from place to place, attending one school after another, never having a fixed home. Others described the anxiety of having nothing to provide a sense of security. People spoke of feeling depressed, isolated and alone and, at times, very angry. Others mentioned “having to grow up too fast.”

These comments reflect a recent ATD Fourth World report which found that, “Poverty both creates and exacerbates mental health issues… The stress of enduring sickness and pain, in combination with constant worry, can cause hopelessness, depression, and chronic anxiety.” The report, Pushed to the Bottom: The Experience of Poverty in the US, stated “Health conditions that start in childhood because of poverty are carried into adulthood and persist throughout people’s lives as emotional and physical wounds.”*

One FWPU participant had worked in Lebanon with refugees.

“Everybody recognized,” she said, “that these families had gone through trauma.” They had fled violence and lost everything. Yet people in poverty often have very similar experiences.”

People sympathize with refugees as “human beings who have gone through hell,” she pointed out. But for people in disadvantaged communities, “Their wounds are not visible and so you will treat someone as if poverty just hit yesterday and you will ignore the rest.”

ATD members said that simply being poor or homeless was not enough to get support. Sometimes the only way to get services is to have a mental health diagnosis or, for young people, to enter the criminal justice system. A therapist cautioned that once someone has a diagnosis or a criminal record, that person carries the stigma forever. 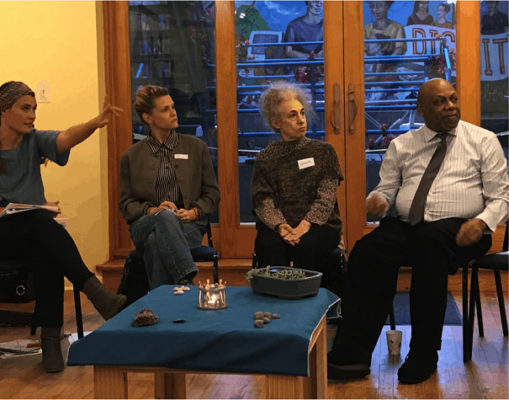 Even when people are in crisis, accessing help is like trying to find your way through a maze. As one FWPU participant said:

“People tell you, ‘I don’t have an available appointment right now. You can call back.’ Even the hotlines do that. They make you answer [so many questions]. And they tell you, ‘If you feel like you’re going to kill yourself, call 911.’ You get to the hospital, and you [still have to wait a long time]. I have been in the psychiatric area of the hospital. And then, when you feel better in the psychiatric ward, it’s even harder to get out. It’s like a constant circle.”

“If you are struggling with mental health issues, and maybe you are in the middle of an episode,” another person explained, “you’re probably not really capable of filling out a hundred pages of paperwork.” Participants suggested that having someone there ready to hold your hand and help with the waiting and paperwork would make a big difference.

As the report Pushed to the Bottom stated, “In a country where poverty is seen as a sign of personal failure, simply being perceived as “poor” is enough for your neighbors to push you away. People often assume you are lazy, or on drugs, or the embodiment of destructive stereotypes… ‘You start to get depressed,’ [one person said], ‘and then you don’t want to be involved with people, so you get even more depressed and more isolated.’”

Coping with the stress of poverty

The FWPU participants had examined together how they do take care of themselves when stressed by difficulty. Mental health care is often seen as a privilege. And people living in poverty do not always have access to mental and general health care services and activities. However, participants noted that taking a walk, having time for one’s self, doing yoga, listening to music, painting, writing, and even taking a shower helped them to find a positive space.

Many people who had experienced poverty also talked about one particular person who had taken time to listen and provide support. One participant said, “I found a teacher, the right teacher, who helped me out. She taught me self-worth. She taught me how to be a strong person for myself.” Other guests also remarked how important it is to have someone to talk with.

One high-school teacher talked about working “…with a lot of kids who struggle with learning, cognitive, and developmental issues… But if they can go to an art class a couple times a week, if you can build up their confidence in other areas, that can lead to anything.”

*Pushed to the Bottom is the US report from a larger international research project on “The Hidden Dimensions of Poverty.”

More information on ATD Fourth World in the U.S.