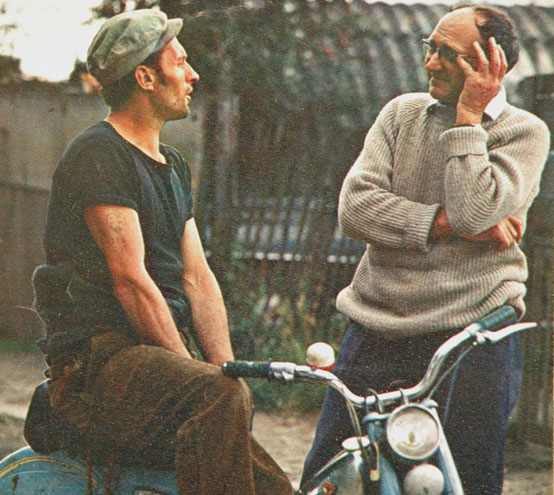 In The Very Poor: Living Proof of the Indivisibility of Human Rights, Joseph Wresinski described his experiences living among people in extreme poverty in France. On February 12, the anniversary of his birth, we remember his life’s work: insisting that people in poverty are more than their problems.

When we think of poverty, we naturally think of problems: homelessness, low income, school failure, etc. We look at these problems in order to understand what’s going on and what to do about it. But what if focusing on problems actually blinds us to a critical aspect of poverty? Like Wresinski, today’s ATD Volunteer Corps members work closely with people in poverty. They see that, in fact, people are working really hard every day to improve their lives. When we don’t recognize this, Wresinski maintained, we miss a key element that could help overcome poverty.

From The Very Poor: Living Proof of the Indivisibility of Human Rights, by Joseph Wresinski

“In the member states of the European Community [now the European Union], when families are deprived to the point where they can no longer buy shoes for their children or detergent to wash their clothes, their acts of resistance often remain invisible to our eyes.

“How many times have I met men who no longer dare to present themselves at the employment agency because even their appearance precluded them from obtaining a job? I have seen them working for a pittance at filthy, illegal jobs…, crying with shame unknown even to their families.

“And do we realize how much courage it takes to endure the inspections and the unending question about one’s own and one’s family’s private life which dependence on social assistance entails?

“Who, among the poorest, has escaped feeling that no one believes him? What man in deepest poverty has never been accused of playacting? What woman has never been told that she was making up a story when going through the inevitable administrative process to receive aid?

“What parents have never been suspected of having ulterior motives in not sending their children to school, when in fact they could not give them the breakfast they needed to walk the four kilometers to school from their rundown housing estate deprived of a school bus service?

“What children from the Fourth World [people living in extreme poverty] have never been called liars for telling the teacher that they stayed home to mind the smaller children because their mother was sick? […]

“How can these families, with their obscure existence, devoid of any outward sign of dignity, owning nothing and finding it impossible to maintain any family or community life, avoid resigning themselves to despair and hatred?

“Knocked down and humiliated to such a degree, why do they not give up altogether? Yet every day in the run-down apartment buildings, the streets, the housing estates of the underclass, we see people get on their feet again, families take a new lease on life and parents face up to their difficulties again.

“To the rare onlookers who express admiration, they say that they do it “for the children”. In a lower voice some will add: “We are human beings, after all.”

In a recent research project with Oxford University, ATD documented how families in poverty struggle every day to survive and give their children a better life. Conducted in six countries, the research also shows that a major obstacle to overcoming poverty is, in fact, the distrust and mistreatment people experience from policies and institutions trying to help them. Read more about “The Hidden Dimensions of Poverty” research project.