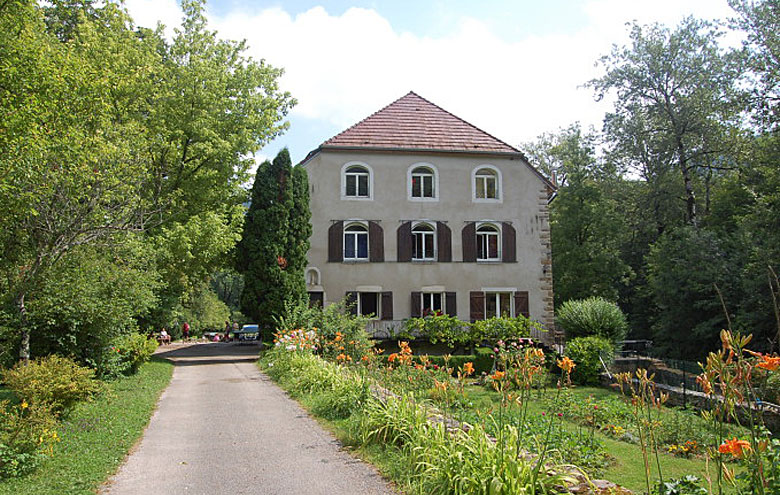 “Families should have a place to retreat to, a peaceful haven where they can collect their strength and where spouses, parents and children, friends and neighbors can have fun together.”

“Mom, this is the first time I’ve seen you smile!”

Jennifer’s inscription on a photo in the vacation album.

There are families worn down by poverty, from whom we don’t expect anything. Children and parents for whom flowers and animals are colorless. People living in big cities who have never travelled to the other side of town, who’ve never seen the mountains or the sea.

Finally, after lengthy preparations, they arrive for vacation in the middle of the Jura [in France], in the old mill with its donkeys and rabbits, its stream and its waterfall. “Look, it’s a bull, it has horns!”, someone yells.

One father takes a while to get out of the car. He sits down on the bench in front of the house. A little worried, a host asks him, “Sir, would you like to join in the activities?” His eyes light up, as if he’d just awakened. “You can’t imagine how nice it is to see that my wife and children are well, that my family is together,” he says.

But it can’t work magic. One mother continues to be very tense the first few days, and tickles her children constantly. She’s unable to relax and let herself go, fearing there’s some hidden danger. “What if this is actually an observation center? Maybe afterwards, they’ll take my children from me”, she says.

La Bise is a vacation home, a place full of surprises, new discoveries, and humanity. Not only for families experiencing poverty, but also for those who host and help them. One person said:

“We should send everyone who wants to learn about ATD there! You’re confronted with your prejudices about who’s living in poverty, your suspicions. Then all of a sudden, after about three days, you’ve made enormous progress. It’s a place where everyone changes, together.”

The vacation’s over and it’s time to leave. Looking at a cabin he built with his children, a father is touched. A teen runs his hands over a wooden salad bowl he sculpted, filed, and sanded for hours. An ally who’s volunteered to drive people comes looking for a woman and her children: “Where’d she go? I don’t see her.” She’s right there, in fact, but she’s become radiant, with a hairstyle and demeanor so different she’s unrecognizable.

After the families leave, we tidy the house for the next visitors. A young woman has left a note in her room that says, “The people who made this place really understand what we need. This vacation has been the best time of my life!” Years later, a woman who stayed at La Bise as a child and is now a mother herself recalls that “that was where I discovered my mom was able to relax, laugh, and have fun.” Looking at another photo she says, “at La Bise, I understood that my son is smart.”

Today we’re starting important renovations and work to bring La Maison de la Bise up to code. We need financial support to complete this work and we thank you for your donations.