Seminar on Governance: Decision Makers Together Toward Peace? 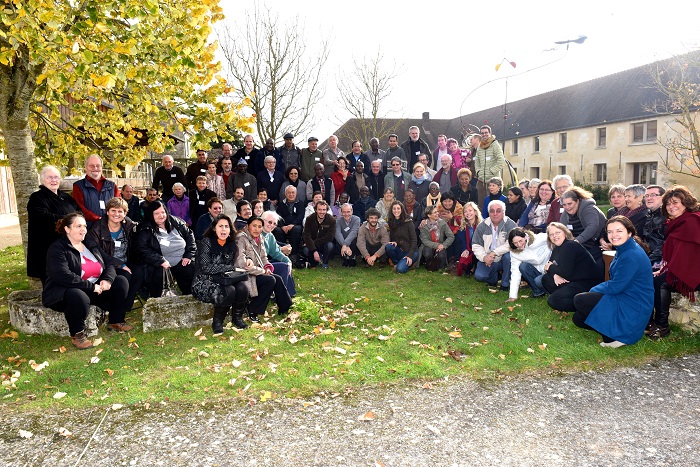 Sixty-eight participants from twenty different countries in Africa, Asia, the Americas, the Indian Ocean, and Europe, met on November 12-15, 2014, to share their cultures, experiences and knowledge in order to challenge ATD Fourth World’s governance and the way our democracies work.

The seminar entitled, Overcoming Extreme Poverty: A Source of Learning on the Path to a Governance for Peace? used the experience of Eugen Brand, ATD’s Director General from 1999 to 2012, as a springboard for discussion and exchange, first in a series of four smaller, international workshops held throughout a year, and then in the seminar itself. [1]

On the seminar’s first day, each participant put forward a word that represented “governance” for him or her: “power,” “management,” “responsibility,” “teamwork,” “decisions,” “democracy” and other terms went up on the board. Priscillia Leprince proposed, “Not me,” and explained why: “That means making important decisions, and my life is already hard enough to manage, and so I feel that I’m not the right person to be taking part in this governance…”

For three days, participants shared their experiences in order to better understand what it means to meet one another, speak together, listen to one another, and organize together; what it means to decide as a diverse group, in very different contexts, with the concern of leaving no one behind. Breaking into small groups Martine Le Corre, one of the seminar chairs, expressed her frustration: “I’m angry because I feel that people like us, from a background of poverty, have always been treated like guinea pigs. Others think of things, imagine them without us, prepare them without us, and then force these things on us. And if it doesn’t work, it’s not a problem; they’ll start again with something else… It’s like they’re always experimenting on us and not looking for any sustainable solution with us.”

Angélique Jeanne, an ATD Fourth World member from France, commented, “I’ve met a lot of people working in social services. I didn’t think I was capable of doing anything, that’s how they made me feel – up until the day when I met a lady who told me about ATD Fourth World. At first, I was wary. If I said something, would that be used against me? I received a warm welcome when I participated in the first meeting and they said to me, ‘Thanks for coming.’ Now I take part in the People’s Universities. We share our knowledge, think together and build confidence. With this seminar, I associate governance with my life. I don’t want others to make decisions for me anymore; I want to be myself and govern my own life.”

Vivian Luis Orozco added her experience from Central America: “In Guatemala, each and every member of ATD has a voice. We can say what we think, and we make decisions together. We all take part in governance.”

On the last day of the seminar, Eugen Brand spoke about the Martissant district in Port-au-Prince, Haiti. “After the January 2010 earthquake, inhabitants could see humanitarian planes flying above them, but no aid ever reached them. In the media, no one ever spoke about the children there who risked their lives digging through the rubble with their bare hands to save lives, or the courage of the families there who had to eke out ways of surviving, with no assistance at all. When the ’Voice of the Voiceless: Rethinking Haiti’s Future’ consultation was put in place, hope returned and the residents of Martissant began to speak out. But at the donor’s conference in New York, the UN Special Advisor for Haiti was granted a mere two minutes to share these voices, this courage, and these hopes. For Haitians, this meant that the wall of exclusion remained stronger than the earthquake.”

Eugen linked this situation to the official apology presented by the Swiss government to the thousands of children sent off to work in farms — often abused, sometimes even deprived of their names—as their parents, because of their great poverty, were deemed unable to raise them. Journalists, museum curators, and politicians have all tried to retrace this history and helped break the silence surrounding it. ATD Fourth World has committed itself to ensuring that the people and families who experienced and continue to experience such violence, be at the heart of this determination to break the silence. ATD activist Gérald Schmutz said, “When I was a kid in an institution, I was fenced in, and I could say to myself, ’Well, this is where my freedom ends.’ Today, there’s no more fence, but with all the measures taken concerning me, it’s like the fence is still there, only now it’s invisible.” He added: “I strive so that people come together and exchange, because that’s the only way we can work together, eye to eye, in order to free ourselves and to find action to take together to put an end to extreme poverty.”

Eugen Brand ended his speech with: “As for ATD Fourth World, a type of governance that leads to peace is a one that fosters opportunities for genuine encounters and exchange at the heart of the academic, political, and business worlds, at the heart of societal life as a whole, at the heart of religions and spiritual traditions – spaces where people living in poverty can meet different decision-makers in all these spheres and where together, they can build new knowledge and strategies (…) so that social exclusion becomes a thing of the past. ‘The Merging of Knowledge and Practices’ opens new doors and outlooks to meet this key 21st century challenge.”

Tilly Evenor from Mauritius thinks that it is not enough that people from Social Services come into her home, and speak with adults about poverty “just to write something and put it in a book.(…) If they really want to know what extreme poverty is, how we send our children to school when we don’t even have enough money to buy bread, they have to spend at least a day with us.”

Speaking at the public session at the end of seminar, Priscillia told those in attendance,“People often say that I’m a ‘young person at risk.’ They don’t ever think that I’m a young person able to actually reflect, especially not about governance.” Then she added, “Now, I like this word. I feel able to assume responsibilities, but not alone, and feel capable of taking part in decision-making.”

“’Adults should join us in building a world without poverty’ is what the Tapori children said during the twentieth anniversary year of the Convention on the Rights of the Child,” is what Deogratias Kankele from the Democratic Republic of the Congo reminded people. “If we make what these children said our mission, I think that the governance we will be building will be a one that moves things forward.”

Like Louis Gallois, a businessman and president of the social integration network FNARS, the guests invited to the last day’s public session understood the importance of being able to speak “eye to eye,” “without teachers or students.” Jose Maria Gil-Robles Gil-Delgado, President of the Jean Monnet Foundation for Europe and former European Parliament President, insisted on the necessity of mobilizing society as a whole, and added, “In that sense, ATD Fourth World’s experience is awaited at the State, European Union, and international community levels.” Yves Doutriaux, a State Advisor and university professor, believes that ensuring the participation of the people will bring sustainable solutions to current conflicts, not just the work that is done by the UN Security Council. Finally, Michel Sauquet, an author and specialist in cross-cultural issues, sees ATD Fourth World’s governance “as an art for creating the types of meetings and exchanges which should impact public policies […] and break down cultural barriers.”

The seminar’s aim was not to outline what is “good governance,” but rather to find points of references in the continual struggle to “compel the world to change.” The goal is not simply to offer a voice to those who have been sentenced to silence, to increase their participation, to seek out those who still do not take part, or to launch new actions, nor to offer a chair or a folding seat here or there – whether that’s in ATD as movement, or in our societies and institutions. The evaluation work on its own governance that has been going for a year inside ATD Fourth World highlights the fact that promoting participation by all is far from enough! The challenge is our capacity to imagine and foster deep and continual changes even in the ways in which we meet and exchange, the ways in which we organize ourselves to be decision-makers together, by constantly creating conditions where each and every person, with his or her own experience and knowledge, questions and answers, vision and proposals, will be an actor who is jointly responsible for decisions concerning his or her own future, neighborhood, village, country and world.

Participants in the seminar all affirmed the meaning behind the expression “all heads together” (têt ansamn). This expression stems from the story of courage and comprehension of peace at the heart of the Haitian people, who, overcoming so many hurdles and humiliations, have never stopped trying to rebuild their country, constantly seeking solidarity and dignity for all. Seminar participants found within that sentiment a key for seeking out and building sustainable peace among people and for all types of governance.

Overcoming Extreme Poverty: A Source of Learning on the Path to a Governance for Peace? from ATD Fourth World on Vimeo.

ATD’s members in the Democratic Republic of the Congo spoke to their government about this approach to “heads-together-for peace” governance. Click here to read about their message.

[1] This seminar took place at the Bergerie de Villaceaux in the French Val d’Oise department. ATD Fourth World would like to thank the The Charles Léopold Mayer Foundation for the Progress of Humankind for the use this venue.