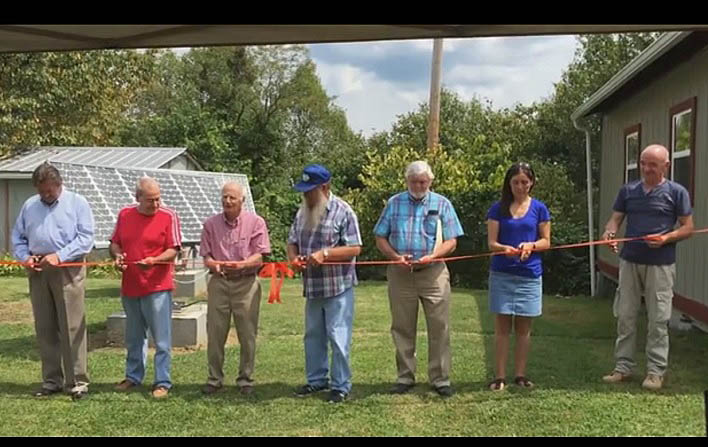 By the ATD Team in Appalachia

August 29th, 2015  marked the opening of our new Solar and Robotics Workshop in Appalachia, Virginia. This workshop came into being through a number of community partnerships and will offer learning about solar panel installation and operation, automation, and robotics.

Solar energy is one of the fastest growing industries in the United States. Solar jobs have increased 86% in the last four years and are growing 10 times faster than National Average Employment Growth. Our team hopes that young people will be able to explore their curiosities in these fields while they also build their resumes and learn valuable job skills in a growth industry.

About our team in Appalachia:

A Fourth World volunteer team has been working in the coal-fields of southwest Virginia since 1995. Our volunteers came to join the efforts of local community development programs and, through them, come to know the population they served. One program on which we especially concentrated was a local community center run and financed by local people. There, we came to know families coming from isolated “hollows” and ridges through the different activities and services offered by the center. As an addition to our adult education program, one of the volunteers offered to begin free basic computer classes for adults at the community center. The center’s board agreed and a regular series of 10 week sessions began which continue to this day. The classes are open to all, with a mix of participants at different social and economic levels, but all pretty much at the same level in front of the computer. Bringing people together who otherwise would not meet is also the aim of the celebration of the World Day for the Eradication of Poverty which has taken place every year since 1995 on October 17.

Since our arrival, ATD Fourth World volunteers have been involved in programs answering the need for education, housing and health care. In the case of the latter, we work with Remote Area Medical or RAM, which comes to the area every summer for a weekend of free dental and eye care and medical exams. Our volunteers spend the week before preparing the open air site which welcomes thousands of patients, treated by over 400 volunteer doctors, dentists and nurses.

With a grant specifically for the Appalachian project, we were able to purchase property and construct our own center in 2006. Before that, our volunteers had been working out of the small frame house in which they lived. The Learning Co-op, as it is called, now welcomes people to share or discover creative skills, such as weaving, quilting, wood working as well as computer skills. A seminar in 2009 gathered local people and participants from other parts of the U.S. and even Europe, for a week of creativity and exchange.

Another video about ATD’s Robotics Workshop: