Staying in Touch During COVID-19 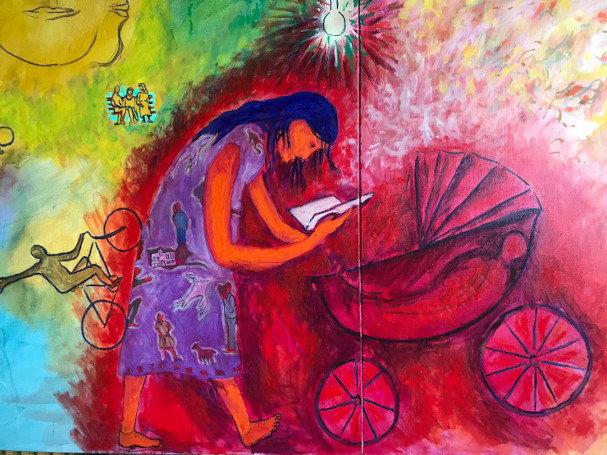 Image above: Detail from “Lives that will not be silent”, 2019, Créteil (France) – ATD Fourth World © Guendouz Bensidoum.

“Everything OK?” Guy asks me this every day on social media. “Yes, I’m fine”, I answer. Guy says he will pray for us.  Gilles, Lilian, and Dominique also ask, “Are you okay?”

In Switzerland, several Fourth World activists who live in poverty call our National Centre in Treyvaux to ask how the ATD team is holding up. “We need you”, they say.

This is our new reality. You have to find out how people are doing. My wife Geneviève and I make a lot of telephone calls. Everyone is happy that someone has called to see how they are.  Everyone wants to talk. But how long will their phone plan last? I tell everyone about ATD France’s campaign for companies not to cancel people’s phone service. I talk to a friend who works at Orange (a French telecommunications company); he says he will pass on the message.

Paulette is happy to talk with us. There are many people living in her apartment, but it’s okay. However, she is afraid to open her window. We try but can’t convince her it is safe to open the window. Nadine is also happy to talk and she returns my call. She should be working in a retirement home but her health is not good so she is on sick leave. She asks if my son is cured; yes, I say. Her mom, whom I have known for 40 years, is also fine. Kamel, Nadine’s son, is 21 and doesn’t want to listen to anyone. He goes out and returns with many friends. “So I wash everything and then I disinfect it all with bleach. And I yell at him, but he’s not listening.”

In the neighbourhood next to us, the young people also stay outside, and continue to survive as they have always done. The ATD Volunteer Corps member who lives in one of the neighbourhood’s housing high rises says it is difficult to home school her children. It is especially difficult for her neighbours, she adds, who do not have computers. At first, they all went to a local shop to print homework, but now the police are stopping that. Mothers are feeling demoralized. However, they have created a phone network to encourage one another not to give up.

Nadine also sends me messages on social networking websites and she shares a lot: photos of candles prayers and jokes. She posts congratulations to the news feed of her sister who continues to work as a cashier, putting herself at risk.

I start to take a closer look at what Fourth World activist friends write on social media. There are wonderful images and songs. I find very beautiful words about courage and fear by Johnny Hallyday, “Clench your fists and fight” by Mike Brant, others that I don’t recognize, and also “Song of the Partisans”, a popular French Resistance song during World War II.

There are lots of messages to thank cashiers or security officers. Franck is all in for a campaign called “Close stores on Sunday, so that cashiers can rest, who agrees?” I share it. Franck also shares lots of videos to counter the belief that the government has created the virus. “A lie like that creates fear and hatred”, he writes.

Thierry is very active, mostly with funny posts and it feels good to read them. But he also posts a great video gently mocking the current situation: “Those who believe they control everything”, it says, “in fact control nothing at all.”

Lili gives a lot of news about her neighbourhood, but most of it is in Tagalog and I only understand a few words in English. I’m going to ask my teammate who speaks Tagalog what she is saying.

My daughter Mathilde is also very active on social media. She offers encouragement and prayers, as well as criticism of a world that values money over health. She shares posts from health workers as well as thanks to fire fighters, delivery drivers, and others. She reposts news about children in migrant camps. She shares a petition to requisition some housing and Airbnbs for the homeless. I had already signed it. Mathilde mentions a campaign I had not seen yet: “If you need help, hang a red cloth on your window to ask your neighbours to knock on your door.” A great idea! I send this one to Marie-Aleth Grard who has just been appointed to a French governmental COVID-19 commission. It’s goal is to make sure that France does not leave anyone behind in its COVID-19 mobilization.