Skip to content
Home > Africa > Senegal > Together to Escape the Water

Together to Escape the Water 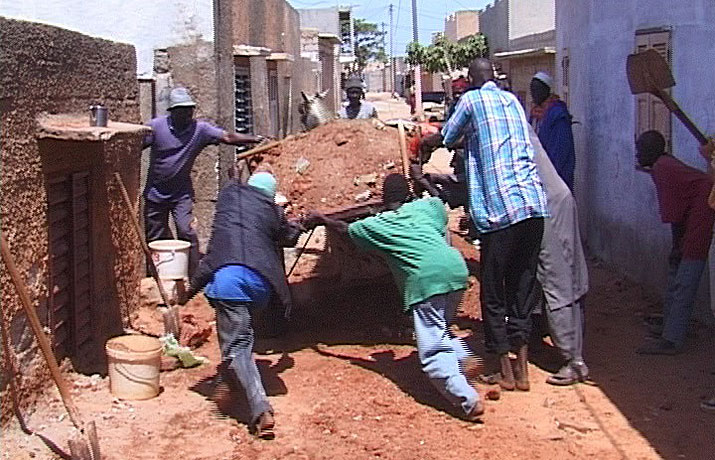 In 2017, ATD Fourth World invited people around the world to document real-life “Stories of Change” arising from situations of injustice and exclusion caused by extreme poverty. These stories, from activists, community leaders, and others, show that when people work together, real change can happen. For more about the “Stories of Change” blog, click here.

In a neglected suburb of Dakar, a community comes together to ensure everyone has dignified housing.

Each and every year, in a neglected suburb of Dakar, the rainy season floods people’s homes. Those who are able build protective barriers with sand or rubble to keep their feet dry after the rains have stopped. The homes of those who are less fortunate remain flooded even after the rainy season, which Amina, a widow, and her two sons are all too familiar with — year-round they used to live with their feet in the water.

The stench was unbearable and Amina had almost no friendships with her neighbours. She no longer took part in community events.

Some of her neighbors, who had long been involved with the work of ATD Fourth World, knew of Amina’s struggles. Theresa, Ouira, and Joseph knew the signs of poverty and exclusion from their own experience and were particularly troubled to see that Amina’s door was always closed.

The closed door was a strong sign of shame and deprivation, of being completely cut off from the community. Amina’s neighbours spoke with two local ATD Fourth World team members to try and find what they could do together to support Amina’s family, one of the most isolated in their district.

The first suggestion was for ATD Fourth World to fund the necessary work to protect Amina’s home. But this brought a dilemma — if ATD Fourth World paid to fix one house when so many other families were also in need, wouldn’t that just create jealousy — a feeling of unfairness that would result in Amina and her family becoming even more isolated?

Consulting with the community, the small group realized they were not alone in their concern for Amina. They discovered other neighbours’ supportive efforts. Some in the community had offered Amina sand to help fill in wet areas. For years now Theresa had invited Amina to come and retrieve water from her place on a regular basis or use her toilets.

Amina’s neighbours came to an agreement: Amina’s family could not remain in that situation any longer and the work to improve their conditions would have to be a collaborative effort, including the community and the family itself.

Gradually, the network of ATD Fourth World supporters mobilized the neighbourhood, the Mayor, religious leaders, and the district chief to find money, materials, and volunteers.

Marc, for example, noticed gravel piled up on a sidewalk in front of his pharmacy as part of a road-resurfacing project. He asked the person in charge for a donation, which was given with great pleasure. When they realized that no truck could pass through the narrow street to Amina’s home, Marc managed to convince an official representative to donate carts to carry the gravel.

Ouria toured the community collecting donations, making sure that everybody could contribute proportionally to how much they could afford. The important thing was that each person felt that their contribution, even if very small, was important: the deprivation Amina and her family were enduring was something the whole community rejected.

“By helping the most deprived person amongst us, we are helping all of us, we are building peace.”

The other priority was the participation of the family itself. It was not easy to convince Amina that everyone was there to help her keep her dignity. In the beginning, she was distrustful. She didn’t want everyone to look at or point at her. But little by little her fear melted away and she realized that she had a say in how the work was done. Her sons brought in the contents of the first two trucks, which had been left in front of the house.

And so began the first collective work project. The first volunteers who came to help were young people living on a beach in Dakar who had been meeting with the ATD Fourth World team on a regular basis. Friends and neighbors dropped by and shoveled bit by bit. Amina wanted to cook for everybody, but with so much activity around her house it simply wasn’t possible. Instead, while the work was ongoing Theresa offered Amina her kitchen, creating an opportunity for her to talk to young people who lived at the beach about her difficult life and encourage them to re-establish ties with their families.

Thanks to everyone’s efforts and to outside support, particularly from the French Embassy, Amina’s house gradually dried up. Professional masons added a few rows of bricks to the wall to make it higher and created several rooms.

When the house was finished, Amina welcomed the visitors inside and offered them drinks and doughnuts, something that would have been impossible when her home was flooded. She had raised her head again in the district and now sells fruit in front of her house. Some of the young people in the neighbourhood come and have tea with her sons.

Because everyone contributed, not only Amina but also the whole district has now regained some pride.

Ten years later, Amina is still living in the same house. Her sons have carried out more work over the years, with little means and a great deal of courage. Now the house is a nice one. Her life remains hard, but Amina’s community accepts her. She has more ties with her neighbours and has regular visitors – even friends. Now, her door remains open.