Skip to content
Home > Europe > France > Watchmen in the Night

Watchmen in the Night 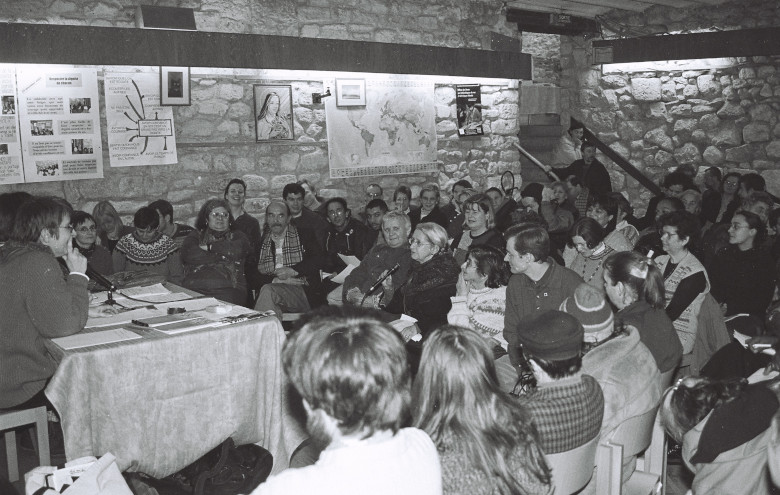 The centennial this year of Geneviève de Gaulle Anthonioz‘s birth is a good time to take a second look at the book And What Do You Think? The Fourth World’s People’s Universities. 1 In the preface, de Gaulle Anthonioz talks about the ATD Fourth World People’s University. These meetings between people from all walks of life were deeply meaningful to her and she was devoted to the Volunteer Corps members and ATD Activists who organized them. Speaking to Activists, she once said, “You know what it means to be denied your rights. You have felt this in your own soul, in your life, and in all your family’s suffering.”

Marie and Georges Jarhling, two Activists who lived in the homeless camp outside Paris where ATD was founded in the late 1950’s, recall Geneviève de Gaulle Anthonioz’s first visit there. “Many people came to see us and help us”, they say in their memoir. “Often we felt that they acted like they were above us. But Genevieve, never. Even though we weren’t from the same background, she was like a sister to us.”

Françoise Ferrand, Volunteer Corps member and author of And What Do You Think?, says, “It was natural to ask Geneviève de Gaulle Anthonioz to write the preface. She often came to the People’s University sessions and said they gave her renewed energy. She attended just like everyone else, speaking like the other participants, simply sharing what she had to say. She knew she had a prestigious position in life because of her family background. But it wasn’t her style to play a certain role. She didn’t pretend to be special in some way. She saw all of us as equals, sharing the same humanity.”

Below are some excerpts from Geneviève de Gaulle Anthonioz’s preface to And What Do You Think? The Fourth World’s People’s Universities:

“One day we will have won a decisive struggle for everyone to have the rights of full citizenship. That day will come when parliaments, universities, the court system, corporations, unions, and other organisations all sit down to really listen to the voices of people who do not currently have the ability to speak out or to participate fully in society. It will be the day when these groups and systems take into consideration their experiences, their knowledge, their thoughts and their human rights. It will come when, after taking these things into consideration, they then change the way they make decisions, analyze problems, engage in their activities, and develop shared goals – all these aspects of their various functions in society.”

Progress towards full citizenship for everyone

“The process of achieveing full citizenship for everyone is a long development through the history of our civilization. It seeks to free humankind from dependence, exploitation, and exclusion, all of which diminish human dignity.  It’s a tribute to our society that, having engaged in serfdom, slavery, and apartheid, we have then rejected and banished these practices. This is true even if racism continues to tempt people to evil and exist as a devastating tragedy. It’s a tribute to our society that today we refuse to accept extreme poverty, and that one day we will overcome it. Today poverty afflicts millions of men, women, and children and threatens many more with similar suffering.”

“We owe the outpouring of concern [about poverty], in part, to those who have spoken up about the scandal of poverty, especially Abbé Pierre. However, we owe this also to the new ideas of Father Joseph Wresinski. He has brought people together with the poorest to reconsider human dignity and to take action with them. We have seen this in the People’s University, an idea invented and then implemented by ATD Fourth World.”

The People’s University: a new kind of citizenship education

“This project is an experiment in a new kind of education for citizenship. In certain conditions, it is possible to bring together people who experience extreme poverty and other citizens who have the means to exercise their rights and responsibilities: people who are well established and people living in the street. It is possible to imagine that these two groups can see themselves in each other, that they can realize a common humanity.”

“This is absolutely necessary for our democracy. The poorest and most excluded people know better than others what a just and fraternal society should look like and what effort needs to be made by a nation in order to respect the dignity of all its members.”

This summer, a radio program from France Culture included a recording of Geneviève de Gaulle Anthonioz who said, “What has changed since 1958 is that the poor are beginning to speak up now… They are like watchmen in the night. They will keep our society from becoming completely lost.”