Water Is a Luxury (Now Even More Scarce) 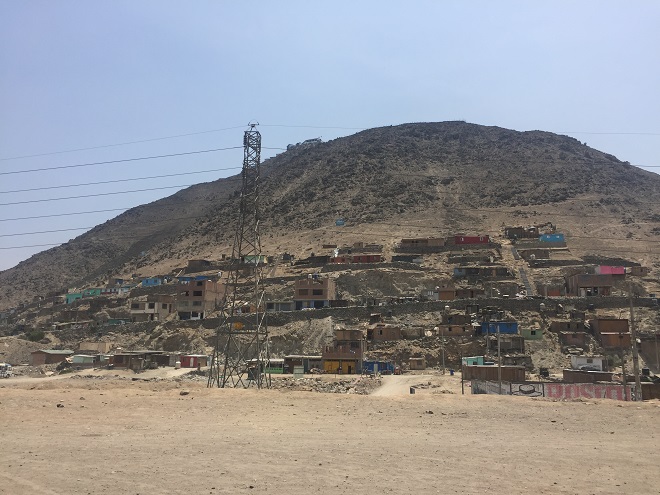 “Water, water, water, the water is running out! The dinosaurs have no water in their homes and have been thirsty for days”.

This is how a play acted out by the children of the Street Library in La Vizcachera in Peru starts. ATD Fourth World has been involved with these children in La Vizcachera since 2012 . The dinosaurs are thirsty like both children and adults of this Lima community that has been struggling for almost 40 years to have access to water.

Today, the neighbors still talk of how, for many years, they had to take buckets down to the Campoy district, about 40 minutes’ walk away, to bring water back to their homes. Despite efforts, water scarcity is still at the heart of this community’s concerns. Seeking a solution, for years they have asked the authorities for support. They have mobilized their scarce material resources and workforce to build a reservoir on the Huaycoloro river that should one day allow water to be pumped to the community.

However, regardless of the neighbors’ tremendous human and financial investment, La Vizcachera, on the outskirts of the Peruvian capital, still lacks drinking water and a sewerage system.

As Luciano Olazabal, a member of the ATD Fourth World team in Lima, explains, “When the Street Library  opens, the children arrive wanting a drink. For them water is a luxury, something delicious, even more so if it’s fresh water from a bottle”.

I have always liked to help

Julia Marcas, a young woman who lives in La Vizcachera with her mother, is also part of the Street Library coordinators team. Every week, around books and children, Julia shows her passion for sharing knowledge, giving and helping: Julia says, “I have always been helped by other people. If someone gives you something, you should give them something in return. Life is like a roulette wheel; everything comes and goes. Since I was little, I have always liked to help. It’s probably because my mum is like that too, and I learned from her”.

When the lockdown due to Covid-19 was announced, Julia began to seek help and to mobilize others to alleviate the rapidly growing problems in her community. In the midst of her efforts, she reflects: “It’s very frustrating not to have enough money to be able to help others. Poverty is not only in the provinces; it is also on the outskirts of Lima. How many have returned to their provinces asking for help? People come to the capital to look for a better future, but now everyone is leaving Lima because it has become the center of the epidemic. Several families from La Vizcachera, mostly those who were renting, have gone back to the cities where they were born. There’s more life in the Sierra than in Lima, everything is brought by hand: vegetables, animals… in Lima everything is dry and difficult…”.

The right to water

The right to water and sanitation is a fundamental human right. According to the United Nations this means that the supply must be sufficient and continuous for personal and domestic use: water for drinking, personal sanitation, washing clothes, preparing food, household cleaning and personal hygiene. Water should also be safe: free from threats to human health; it should be of an acceptable color, odor and taste; it should be physically accessible and affordable for all.

Almost 40 years after it was founded, La Vizcachera not only lacks drinking water infrastructure and sanitation, but it does not benefit from any water supply program by the public authorities either.

In the absence of a public service that guarantees their right to water, neighbors use the services of water suppliers or ‘aguateros’ who come to the neighborhood with tanks to sell water by the liter. It is well known that in La Vizcachera, the neighbors – many of whom are living in poverty – spend the same amount on water in a week as a middle-class family in Lima spends in a month. Also, the distribution and storage system represents a real public health problem. Neighbors store water the best they can, but it’s always precarious; if there’s a little money, they store it in tanks or wells built on their land, and if not, then they keep it in plastic cylinders and drums, or even in buckets and tubs.

On the highest part of La Vizcachera, the situation is even worse. It costs more to pump the water up there, so the higher up you live, the more expensive a liter of water is. In the worst-case scenario, families who cannot pay for pumping or whose house is too high up so the hoses don’t even reach them have to carry water up the hill one bucket at a time. And then they look after it in the same way as others look after their most valuable belongings.

Water is a luxury, and the children at the street library know it.

For the poorest families in Peru, often dependent on the informal economy, the lockdown has brought with it a meteoric loss of income. Within days, the water shortage in La Vizcachera was already truly unbearable. There was no water, and no money with which to buy it. Water has always been critical, but it is even more so when your health depends on frequent hand washing. Eventually the Lima Drinking Water and Sewerage Service sent some tanks to help, but they were just barely enough for a few families in the flat part of the La Vizcachera. In these circumstances, as Julia explains “aguateros are charging only half price for pumping, or even less for those who need it most. The most vulnerable people live in the highest parts. At the top of the hill there is a grandmother who lives alone. She was a street vendor and paid her 80 soles for pumping, but now she has nothing, so the aguatero only charges her for the water and a symbolic amount for pumping, just what she can pay him.”

Over the course of eight years in the neighborhood, the ATD Fourth World team has created strong ties with Julia and her mother, Dominga, and with many other neighbors: Séfora, Ana, Melia, Ana María, Juana, Yovanna, Meche… Year after year, they have been creating ties of friendship and getting involved with the 120 or so children who take part in the Street Library; they have a shared path with all those in the neighborhood.

Julia, her mother, and the ATD Fourth World allies have been concerned about the welfare of families in La Vizcachera and other Lima neighborhoods since the beginning of the lockdown. So the team raised the money to get four water tanks and the necessary pumping equipment to reach the highest parts of the neighborhood, in the name of the Street Library.

The day that the tanks arrived, several parents joined Julia to organize the water distribution. There were also some young people, proud of the fact that this water came from the Street Library that they took part in as children. The work was arduous and took nearly 12 hours. The water reached households that no longer had a drop, and the arrival of this luxury was celebrated. However, despite efforts to share, there’s still not enough for every house and they know that, in just a few days, it will be necessary to fight again to get water to the uppermost part of the neighborhood.

Julia and her mother continue to mobilize for their neighbors, and the challenges are mounting up. With the lockdown, food shortages are also on the increase, so for a few weeks they have been working with other neighbors to cook together. They have created a kind of food cooperative to which neighbors contribute and so do some donors that Julia has found through her social media connections

Julia says, “If I seek help for my community, and it’s no more than an hour from central Lima, imagine other communities, how must they be living? What will their reality be like? I have access to technology to ask for help, but if they don’t, how must they be sustaining themselves? That’s my concern…”.

At what point will the public authorities have the same concerns as Julia, the same urgency to help? When will their initiatives for respecting human rights be united? Will the right to water be implemented once and for all in La Vizcachera and so many other communities where, despite their efforts, neighbors are still thirsty for water and their rights?

This article is part of a series about the solidarity and mutual support that exists in the poorest neighborhoods of Latin America during the COVID-19 pandemic. The objective of these articles is to raise awareness and learn from those in extreme poverty.

Get involved with ATD Fourth World.