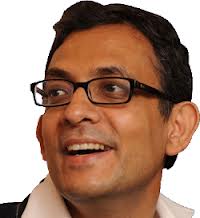 We Cannot Build Anti-poverty Programmes Without Paying Attention To What Poor People Say, How They Behave, What They Think

Interview made on October 17th, 2012 in Brussels of Professor Abhijit Banerjee by Jean-Christophe Sarrot for the issue of January 2013 of Feuille de route Quart Monde, the monthly French newspaper of the International Movement ATD Fourth World and its website.

Do you think people living in poverty should and could be associated to anti-poverty programmes?

I don’t think poor people can be directly associated to the designing of the programmes. What I think is that we cannot build anti-poverty programmes without paying attention to what poor people say, how they behave, what they think. If you ask a poor person: “How should we design income-transfer programmes?”, she won’t give you a coherent answer. There is a space for professionalism and a space for aggregating the knowledge. Poor people have knowledge. But it doesn’t mean that they have specialized knowledge which allows them to balance all the issues. So I am not saying that they should be directly designing policies. I am saying that we should pay attention to them, ask them questions before we design the policies.

What do you think of the objection made by some development experts that such an approach would cost a lot of money?

We waste tons of money. Bad policies are infinitely costly, because you promise people things and nothing happens. I think that if we did things right, we would save money in the long run.

What did you learn meeting ATD Fourth World activists in Brussels on October, 17th?

I learned a lot about what they do. I didn’t know that. I learned something that I always felt: that poor people are very reflective. They are not just frustrated with fate. They interiorise their own situation, they think about it, they have an explanation of how the things go one way or the other… They are not machines, and I think that it is very important. They are not just reactive, they are intellectually active, they are clearly thinking. That is what I always thought and that’s what I saw here.

That’s absolutely right. We do too little of that. There is a huge need for, for example, suggesting that young people do projects together with people from other backgrounds. I think that you learn an enormous amount from them. But we just don’t do it. We are becoming so scared of any kind of social engineering that we move away from that. But I don’t see any reason for that. They would be much better citizens and human beings if they spent more time talking with poor people when they are young.