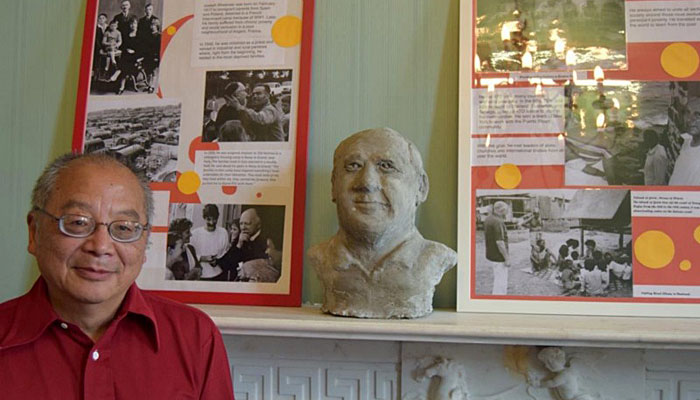 In this Story of Change, artist and long term ally of ATD Fourth World in Ireland Long Weng talks about what inspired him to create a sculpture of Joseph Wresinski.

This one came from my heart

I have done many sculptures in my time, but this one came from my heart.

I want to tell you a story about a man in Ballymun, Dublin, named John. He worked as an office cleaner for 20 years. At one time John was sick and spent several days in hospital. When he came back to work the boss told him, “John, it’s better for your health if you stay at home from now on. We’re going to let you go.” John was so upset that when he got home he locked himself in his room and cried.

Brendan, a friend of John’s, went to visit him. The next day, John went back to see his boss. He handed him a letter from the doctor. The letter explained that John was more than capable of doing the work. John also gave his boss a letter to show his experience and his qualifications for the job.

The boss was so shocked. He was surprised to see this little man being so powerful and determined to get his job back. The boss was speechless for he had never had someone talk to him like that.

So the boss held a board meeting to decide John’s fate. After the meeting, the boss went to John and asked him very politely, “John will you please come back to work?”

“When you are poor and powerless you forget you have dignity”

I asked Brendan, “What did you say to John to make him act like this?” Brendan replied that it was all about having dignity. It was ATD that taught him about dignity and how even a little person can have dignity. Joseph Wresinski, the founder of ATD Fourth World, affirmed the dignity of all people, especially those living in poverty. Wresinski was very humble and close to the people. He was an ordinary man.

When you are poor and powerless you forget you have dignity. Wresinski woke people up and made them realize that they too have dignity.

A legacy that lives on

I am an artist, and I created a bust of Joseph Wresinski that the Alliance Francaise first unveiled in its Dublin building last June. Even though Wresinski has passed away, I wanted to do this sculpture because  I can see that his work lives on through ATD Fourth World.

I used simple materials to do this sculpture because I wanted to show Wresinski as the humble figure he was. And how the ordinary person can use their voice and be powerful.