Skip to content
Home > Africa > Democratic Republic of Congo > World Day for Overcoming Poverty in Bukavu: A Chance for People in Poverty to Have Their Voices Heard

World Day for Overcoming Poverty in Bukavu: A Chance for People in Poverty to Have Their Voices Heard 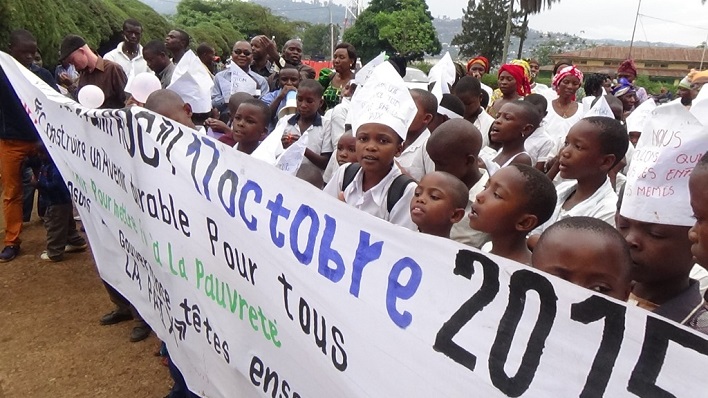 Democratic Republic of the Congo – Throughout the month of October, young people, adults and children from several neighbourhoods of Bukavu organised a peaceful march of 800 people to mark the World Day for Overcoming Poverty. This march, on 17 October, started from Independence Square and delivered a message to the governor of the province. The message was a way for people in poverty finally to make their ideas and voices heard as citizens who help to build a sustainable future for all.

Members of ATD Fourth World, from the youngest to the oldest, actively participated in the day’s organisation. Young people from a neighbourhood called Cibandihwe distributed invitations and spoke to school headmasters so that children could be allowed to join the march even though it took place on a school day. Parents persuaded their neighbours to bring their children to participate. Children wore hats made by the young people with messages promoting dignity, respect, and development.

Invitations distributed to the media, partners and non-governmental organisations helped to publicise the event widely. Radio Okapi, the radio of the United Nations Mission for Stabilization of the Congo, and the National Congolese Radio and Television invited ATD Fourth World members to participate in their broadcasts to help spread the news about the march.

On the big day, it was with joy that families from many different neighbourhoods assembled. Some were long-time members ATD Fourth World, while others were new. Many of the young people and adults among them were giving up the chance to earn wages that day in order to participate. They did this because they absolutely did not want to miss the chance offered by this international day to increase public commitment to overcoming poverty. A member of ATD’s national coordination team, Deo Kankele, says: “We struggle daily to break through isolation. An effort is needed for our whole community to understand that people in poverty are people like everyone else. They must be allowed to speak out and express themselves. On this 17th of October, we did manage to prove that people in poverty are here and they are human beings. They have something to say, and they have the same blood as anyone else running through their veins.”

A passer-by who asked a child what he was doing in the group instead of being in school received this answer: “Today is a day against poverty. Although this is a school day, we’re here because sometimes we are turned away from class if our parents have not yet paid school fees. “

The demonstrators were proud to be received by three provincial ministers: Gisèle Balegamire, Minister of Justice and Human Rights; Mzee Somora Patrick, Minister of Budgeting and Planning; and Mwanza Nangunya, Minister of Health, Gender, Family and Humanitarian Aid. Children, young people and adults spoke about their lives to the ministers. Papa Emile, a father who has faced the hardship of poverty in his life, read the main speech. This was followed by an open debate in the style of a People’s University.

At the heart of Papa Emile’s message was a reminder that everyone is capable of thinking, no matter how poor they are. He also said that in order for plans for the future to include all people, it is all people who must be able to participate in making these plans:
“One of us said, ‘It is possible to die in material poverty, but a person’s thinking is always rich.’ Everywhere in the world, people in extreme poverty are looked down upon like rubbish, like people who don’t count, the nobodies. Quite often, projects are brought to our communities without a word ever being said to us.
“The theme proposed by the United Nations for 17 October 2015 is “Building a sustainable future: Coming together to end poverty and discrimination”. But is it possible to embark on such a huge venture alone, without others? Is it possible to end extreme poverty without us, the people who experience it daily? How can we manage to build the sustainable future we so yearn for without a partnership including all people: all the residents of the same village, the same neighbourhood, the same city, and so on? Thus the need for a ‘heads-together-for-peace governance.’
“We must understand that no one should have to struggle alone in destitution. Poverty is like a weed; it needs constant pulling out, roots and all. And for this, we need the efforts of each and every person. We should all feel responsible for permanently erasing poverty to let peace grow in its place. We must make room for each other and above all, we must make room for those who are missing in community life — people isolated by deep poverty. Looking at the big picture, we should know that we cannot go further unless all of us share joint responsibility. This approach can become a gift: many different visions, ways of thinking, and of creating together.”

The day made everyone proud. Mrs Céline highlighted this during the People’s University debate, saying “This is the first time my husband has found an opportunity to introduce me to people like this. I am delighted to participate in an event that allows me to meet these kind of people, and to address them. This is what it means to look for a heads-together-for-peace governance.”

In the evening, when the marchers returned to the starting point, the Cibandihwe mothers sang the whole time and were joined by others. One young woman in the group said, “A day like this unites people. All equal, all for the same purpose.” And that was not all: later, when the march was evaluated, the Cibandihwe families decided to organize a similar event in their community, to give an opportunity to all those who had been unable to participate and to experience the spirit of the 17th October.

These activities took part as one of the three priorities of the Friends of ATD Fourth World-DRC Association, namely “through solidarity and brotherhood, people can stand up for themselves”. The march also highlighted one of many ways in which people in poverty contribute to the Sustainable Development Goals—in which each and every one of us has a stake.