A Way Forward for People Living in Poverty

Posted on 30 September 2020
This page is available in Português 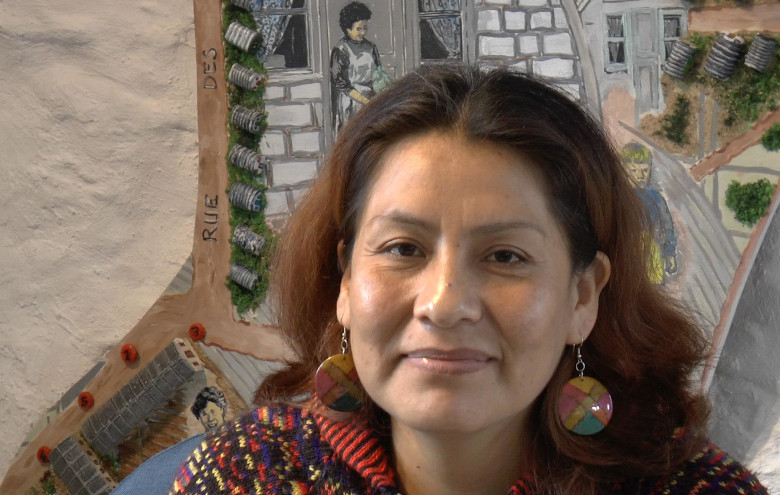 ATD Fourth World Volunteer Corps member Edith Saire is originally from Cuzco, Peru. She has been a member of the ATD Volunteer Corps for about ten years. Here she looks back on how she got involved and what she has learned from people in poverty in South America and Europe.

“I rediscovered the meaning I wanted to give to my life”

Immersed in the Catholic faith since her childhood, Edith wanted to become a nun. At the age of 19, she met the “Sisters of Divine Providence of Crehen,” a congregation with connections to liberation theology.1 Four years later, the sisters had become elderly and the congregation closed its doors. Edith went on to study computer science, but never lost her interest in social issues.

Once she graduated, a friend offered her the opportunity to teach computer science to children and young people Cuyo Grande, a town about an hour away from where she grew up. “It was really by coincidence,” Edith explains. “She couldn’t do it any more, so she called me.” Edith began to work closely with ATD Fourth World who had started the project. “It aroused my curiosity,” she says. “I saw that [ATD Fourth World] was working to completely eradicate poverty.”

Edith speaks Quechua, a considerable asset for developing closer relationships with the local population. “ATD Fourth World created groups of families called ‘Uyarinakusunchis’ in Quechua, which means ‘we listen to each other.’ These gatherings were a form of the Fourth World People’s University, and the families spoke Quechua. So I was doing the translations and interpretation. Quechua is the language of my grandparents.”

In 2009, during a training session, Edith met her future husband Jonathan, a French member of the Volunteer Corps. The young couple then moved to La Bise Family Holiday House, run by ATD in France.

Everyone has the right to a vacation

La Bise is a Family Holiday House where children and parents living in poverty, often separated by court order, can spend time together. The atmosphere is pleasant and peaceful, conducive to rest and group activities. However, this new work overwhelmed Edith.

“I had heard that poverty and extreme poverty were everywhere, in every country in the world. I knew they existed in the most developed countries such as France, Luxembourg, Switzerland or Belgium where the families at La Bise came from. These are rich countries, but they have not managed to find a solution to extreme poverty within their own borders.

“Many people living in poverty are subjected to a system of social assistance and control that damages their motivation. It destroys their enthusiasm for trying new things as well as the hopes and dreams that help them to move forward in life. What gives balance to someone’s life? How can a person whose life is on hold by assistance programs, by being seen as an outsider or by judgments of others, find their voice so as to build their own life independently?”

During family holiday stays at La Bise, there were many activities: swimming trips to lakes and waterfalls; visits to caves; and crafts such as painting, sewing, making family photo albums, theatre, etc. Through these activities, Edith discovered that sometimes “…people have many difficulties, especially with motor control. It impedes their creativity. I wondered, ‘What had happened to them?!’ It really made me think.” However, massage workshops helped develop mutual trust among the group. “People loved it. Little by little, they would open up.”

The whole family gets involved

After working at La Bise, Edith and Jonathan, now with three young children, returned to the Peruvian mountains where Edith had first joined ATD’s Volunteer Corps: back to Cuyo Grande.

Even though she is from the region, Edith describes being astonished at the difference between the Peruvian urban and rural environments. “I realized that I was a foreigner in Cuyo Grande,” she said. “I understood that Pachamama (mother earth) had a profound value,” she continued. “It nourishes us and gives us life. We can cultivate it all our lives, but it remains generous. I was surprised by the tenacity of the women who dedicated their lives to working the land. But above all, I was struck by their ability to keep moving forward, to organize amongst themselves, and to dream.

“Life is not easy for people living in poverty in the countryside. Just surviving is a daily struggle. Many don’t have their own land, so they offer their labor to others. They work at very demanding jobs in exchange for a little money or just a plate of food.

“I was impressed with the communal assemblies where people discuss community issues in a democratic manner. These assemblies set the rhythm of community life. The local authorities should listen to and respect these people and implement their ideas.”

Like everyone in Cuyo Grande, Edith and Jonathan participated in the communal assemblies. But they also took part in community work (repairing bridges, roads, etc.), harvesting in the fields, and construction work. Gradually, they also began to attend other residents’ family gatherings such as funerals, weddings, and celebrations.

One of these activities that made a big impression on Edith was collective cooking for school meals. At Cuyo Grande’s school, there is no canteen. Every day, parents take turns providing part of the food and cooking for the approximately 250 children from nursery school through high school.

“With three children in different classes,” Edith explained, “our turn came quickly.” Usually it was the women who took care of this task, until one day Jonathan decided to help too. From then on, other men gradually joined in. For Edith, every moment with other parents was an opportunity to get to know the inhabitants better.

At the same time, Edith and Jonathan were developing Street Libraries or rather “field libraries” as they call them. “In Cuyo Grande, we are in the middle of the mountains. There are no real streets, so we preferred to call them ‘field libraries.’ These activities strengthen our bonds with the children and their families, especially with the most excluded people.” Here, the entire family’s commitment to ATD’s work takes on its full meaning.

“Our children opened many doors that helped us become integrated into the community and gain people’s trust in Cuyo Grande. Being part of the community has enriched us individually but also as a family.”

More on ATD in Latin America