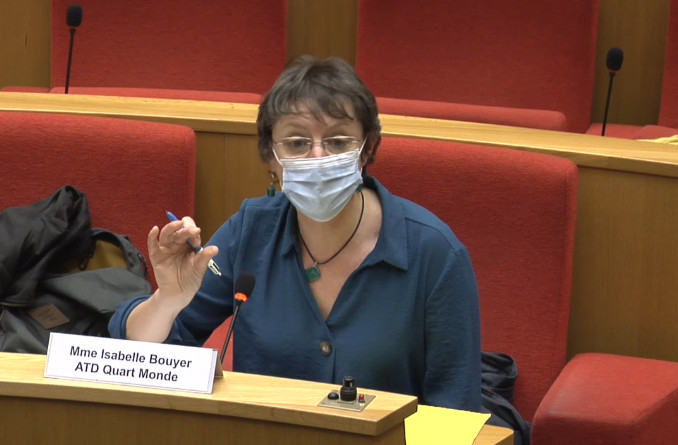 Photo above: Isabelle Bouyer speaking to the French Senate.

It’s time to stop using “band-aid measures” to help people living in poverty, said Isabelle Bouyer from ATD France. Speaking at a national Senate hearing, she called for the country to provide structural and long-term responses instead.

In recent weeks, members of ATD France have been taking part in a number of government hearings. Addressing a fact-finding commission on insecurity and poverty, Ms Bouyer stated that many “measures being taken today completely exclude people in poverty over the long term”.

In response to Covid-19, the French government gave some families a one-time payment of 150 euros at the end of 2020. While helpful, Ms Bouyer insisted, this was much too little to solve any long-term problems. “When does government policy really enable people to access their rights* and not just provide a short-term fix?” she asked. “When you give a family a one time payment of 150 euros”, she continued, “it is only a band-aid.”

For ATD Fourth World, “the response can only be structural and long-term”, Ms Bouyer said, criticizing what she characterized as “the institutionalization of food aid”. Commenting on the explosion of people experiencing food insecurity in France, she cautioned that food banks must remain a short term solution only.

Currently, millions of people have trouble finding not only food, but housing, Ms Bouyer added. Access to health care and coping with debt are problems for millions as well. Currently the French government gives people 567 euros a month through a program called the RSA. However, Ms Bouyer urged, for families to live in dignity, the country must make the political choice to increase the minimum income supplement to at least to 850 euros.

“There is no proof that increasing the RSA would discourage people from working”, Ms Bouyer asserted, responding to arguments by some government members.

While provision for a “decent living income” is in the French constitution, Ms Bouyer explained that in fact it is not available to young adults. However, estimates show that 10% of 18 to 26 year-olds in France live in poverty.

While an increased RSA income would allow all families to escape “a permanent state of emergency”, it would also enable young people to plan ahead and become independent, she pointed out.

Speaking from ATD’s experience working directly with families, Ms Bouyer explained that many live day to day, struggling to deal with one crisis after another. An income of 850 euros/month would enable a single person to stabilize their life, putting them on the path to employment.

However, for many families, all their energy goes into just finding food and surviving emergencies related to housing, health care, or other family situations. Unable to make long-term plans, they can never focus on finding a way out of poverty. As Ms Bouyer stated,

Just as increasing the RSA is a political choice, so is improving rundown housing and respecting laws on urban planning. While helpful policies do exist, proper implementation is key. For government assistance to be effective, Ms Bouyer concluded, it is necessary to “give professionals sufficient time to reach out to ‘invisible’ people and to establish relationships”.

The senators must submit their commission’s fact-finding report before the end of June. In order to develop effective measures, Ms. Bouyer urged them to “rethink public policies, keeping in mind people who are so often forgotten“.

*Here Ms Bouyer is making reference to government programs like the RSA or housing subsidies. These often go unused because people don’t know they are entitled to them.

More on ATD’s work in France.