Finding Hope in a Blank Sheet of Paper 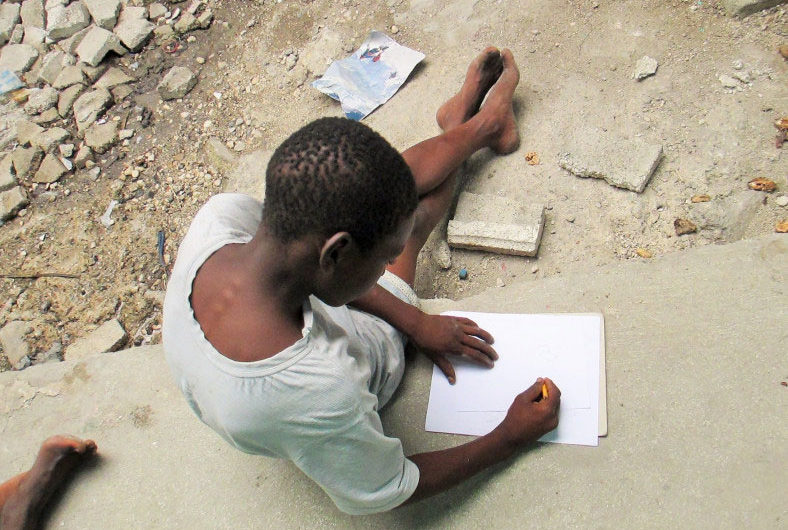 Beatriz Monje Barón is a member of the ATD Fourth World Volunteer Corps. She has worked in England and her home country of Spain, and at ATD’s International Center in France. Currently based in Mexico, Beatriz is now part of ATD’s Regional Delegation for Latin America and the Caribbean. Soon after the 2010 earthquake in Haiti, she visited one of ATD’s projects with children living on the street in Port au Prince. She took the pictures in this article where she talks about the power of drawing in children’s lives.

For several weeks now, I have been reading things written by Joseph Wresinki. These readings take me to and fro in my memories and help me reflect on what other people say and think. I also re-discovered something that Guatemalan artist and activist, Guillermo Díaz said about a blank sheet of paper one day when we were working together in Mexico. Today, his words spur me to write about something I saw one morning in Port au Prince in 2013. It was during one of ATD’s weekly projects with a group of homeless children who were struggling to survive in that city.

Since 1981, ATD Fourth World had developed various initiatives in Haiti. These include a project for mothers and babies focusing on nutrition and early childhood development, a school for children ages three to six, an IT workshop for young people, and a healthcare system for families.

The central thread of all of these projects is reaching out to families hit hardest by poverty, those who have difficulty accessing conventional programs that provide assistance.

ATD Fourth World develops these projects with people living in deepest poverty, reviewing them regularly with participants. This allows people to take part fully in any initiative working to overcome poverty and support of human rights. At the time of the 2010 earthquake, ATD Fourth World strove to ensure that emergency help reached people living in very deep poverty, especially the most excluded and those who lived in the “dangerous red zones,” places where relief efforts would not go.

With this goal in mind, ATD Volunteer Corps members Rosanna, Mogene and David met every week with a group of children living on the streets of the Haitian capital. Most people think the number of children on the streets has increased significantly after the earthquake. These children had many different stories. The morning when I went to see them, they were gathered around a street library. After all these years I never stop being moved by how children around the world love books, whatever their circumstances may be. They love the joy and peace of encountering words and illustrations, looking through the window those books open on a new world.

So I joined in this street library, amazed and awed as always by the power of reading. But that day, it was the children’s drawing in particular that I found deeply moving. One by one, a child would take a blank sheet of paper and pencils, some already very short from much use. In the most deliberate and meticulous manner you can imagine, the child started to draw, very slowly at first: the outlines, and then the color. Throughout my life, I have seen many children draw, but never, ever, in such an extraordinary manner, so full of perspective on the world, so preoccupied with visual design, so full of desire for expression, so full of childhood.

The truth is that I tried many times to put what I saw that day into words. I was determined to capture the experience for myself in words, but I always gave up. Even now it seems impossible to do justice to that extraordinary way of drawing, those hands and eyes, and so much childhood. However, inspired by Guillermo’s words, I made up my mind to share some of the photographs I took that morning.

Guillermo is originally from one of the small villages in the town of San Jacinto in Chiquimula, Guatemala. On that day in Mexico City he said something that really struck me. “I was a street library boy in my village in the seventies, when Guatemala found itself at war. Thanks to the libraries I was able to draw pictures on a blank sheet of paper. It was a moment of peace. My country was suffering very much and we children couldn’t see much light anywhere in our lives. But this blank page opened many doors for me. It gave me so much light. So many children in the world need this light. The simple fact of having a blank sheet of paper meant a lot to me. Seeing the beautiful books that they brought, it was a dream for me. It was a dream of a different world where as a child I had rights too. I can say that I am who I am today thanks to this library. I work as a primary school teacher and I like to paint. It was the street library taught me all this and gave me so much light to follow. If we join together in a similar way, we can reach many children.”

I suppose you can imagine how much these words captured that moment in Haiti that I had treasured for so long. I am not sharing what Guillermo said as a kind of conclusion. His words are not ending, they do not explain. They do not help us to be at peace with the unbearable or even justify what we, with ATD, are doing. Nor do they put an end to our questions about what steps we should be taking in our work. And they do not lessen our sense of urgency about overcoming poverty.

But what Guillermo said does illustrate something important and shed a light that encourages us to keep offering blank sheets of paper to children in order to nourish their hope. Above all, his words encourage us to look at each child who draws with the same measured pauses of those children in Haiti. If only we could look at children with the same cautious deliberate pause, the same clarity that their eyes possess. What would we see if looked at things this way? A child, a sick child and a friend bringing them flowers, a school, two cars, a playing field, a football field and a house, a boy and a girl hand in hand, a line. We would see a blank sheet of paper giving immeasurable support to a child simply trying to survive, a child who still has hope.

Read an interview with Beatriz.

Beatriz is a member of ATD Fourth World’s full-time Volunteer Corps. Learn more about this opportunity to work alongside people who live in deep poverty around the world.