Skip to content
Home > Latin America and the Caribbean > Guatemala during Lockdown: “We Were Not Alone”

Guatemala during Lockdown: “We Were Not Alone”

Posted on 16 July 2020
This page is available in Português 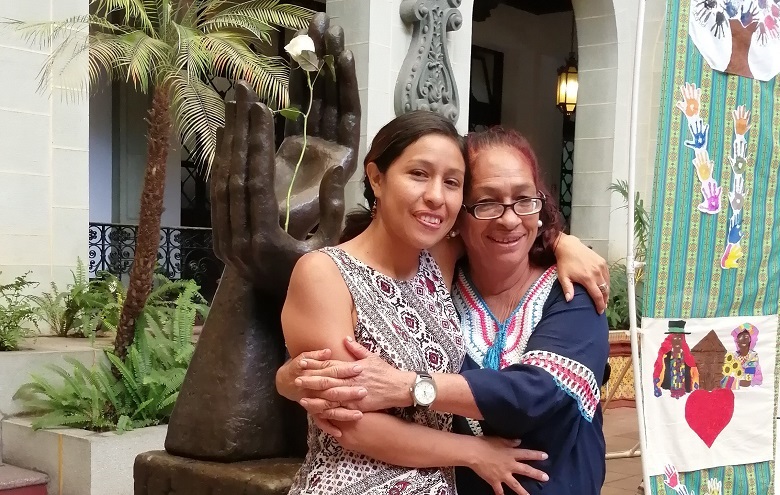 In July 2020, like many countries, Guatemala was in lockdown. ATD Activist Vivi Luis and her mother organized neighbors to help each other out. Concerned for people who had lost their income or lived alone, they worked hard to make sure no one was forgotten. “When all this is over,” Vivi says, “people will be able to say, ‘We were not alone.’”

When lockdown started, the first thing I thought about was what’s going to happen to so many people I know. My mum and I were concerned about the women who make crafts with the Working and Learning Together (WLT) project.* What would happen to them, especially the women whose lives were the hardest? We knew that we had to keep giving them their salary. Others, we thought, could probably get help through family members.

Thinking about all this, I started visiting the women in WLT to give them their salary. When I got home, I told my mother all about what happened. At about 11 p.m. that night, she suddenly got up. “Vivi, I’m thinking about [a family],” she said worriedly. I told her I was just thinking about some other people too.

Having my mum by my side is key for me. She’s always pushing me and encouraging me, giving me advice too. She’s very wise and that night she was right. Many families didn’t have support from anyone. I was left wondering what I could do.

There were the women from WLT, but I knew many other families who were about to experience some very hard times. I was especially worried about all the people who can barely earn enough to survive from one day to the next. Now they couldn’t go out at all to earn money.

We have to stick together

My brother suggested that we think about which friends could help us make bags of food for people. “We’re not going to just hand out money,” he said. “It’s about family and friends helping each other out.” We all wanted to get involved so my brothers made a list of everyone we knew who might be able to contribute something.

The ATD team at the Fourth World House was also thinking about how to support people. And ATD friends and allies were expressing concern about families we all knew and how they were coping. By that time, we had already been in lock down for 15 days.

We joined forces because we were all asking ourselves the same questions. I think everyone really cares about each other, but sometimes we just need a little push. Very quickly people started telling us, “I can help out. Where should I send some money?”

Mrs. Tania: taking a risk to check on neighbors

For me, Mrs. Tania is very important. She’s always thinking about her neighbors and her family. She’s the one who tells me what’s going on with people who live in our building. “At times like this,” she said to me, “we are all in need.” Since I couldn’t visit everyone, I relied on Mrs. Tania for news about how different neighbors were doing.

Our building has two levels. Mrs. Tania takes care of the families on the upper level. I have my eye on everyone on the ground floor. She and I live on the same floor, so I can risk going to see her. I wanted to get her point of view on everything. Of course, I also wanted to know how she was doing. Was she getting worn out?

Ms. Wanda is someone who really suffers. Sometimes she doesn’t even have the strength to get out of bed. Living in deep poverty, she and her family are very isolated. So you really have to be with her, talk to her, and give a lot of encouragement.

Many people single out Ms. Wanda and her family because of their extreme poverty. They say the family’s house is full of junk. It’s true they collect cans and all kind of things to recycle. That’s why they have bins full of trash outside their house. So people are always yelling at them because they block the road. Sometimes they burn things and this makes a lot of smoke. But that’s how they manage to get by.

Ms. Wanda is part of WLT though. We couldn’t leave her all alone for two weeks. Even if she received her salary, that’s not all she needed. We knew she’d need someone to talk to and that would help her a lot.

For me, visiting people, just being with them, is essential. In my community, I have to keep doing that.

Mrs. Elena is 65. Since her youngest daughter left home, she lives alone. It has been a year since Mrs. Elena left WLT. From time to time though she used to come to the Fourth World House to have a cup of coffee and chat. I thought surely Mrs. Elena must also feel very lonely now. And she was.

We talk twice a week on the phone, sometimes for an hour. She tells me what she’s thinking and dreaming about, even what she goes through with her chickens. They are all she has. Because she doesn’t have a television at home, I’m the only way she knows what’s going on.

“Vivi, I want to ask if you could take me to a retirement home,” she said to me recently. “If I went to one, would you come and see me on visiting days? I don’t have anyone. No one cares about me. Sometimes I can’t afford my medicine. I feel like I’m not important to anyone at all. But I want to know that you would come and see me. I don’t want to be all by myself in a retirement home. But if I’m alone there, I might as well just be here.”

I told her we would talk about it. For now, nothing can be done. But I promised her that if she goes to a retirement home I will come and see her whenever I can.

Back then, we stayed inside for a different reason

When I was little, my family lived through a lot of difficult and painful things. We were often very lonely and people were constantly judging us. I’ll always remember that time in my life.

Jaime, Lorenzo, and Paul were ATD Volunteer Corps members here in Guatemala back then. When I was about 14 years old, my mother was away for a time. During those three months, life just stopped because she was everything to us.

But I remember Lorenzo would come to our house at seven each morning and make sure we went to school. Every morning the door bell would ring and he would be there. My mother’s friends also took care of us. All of that made a big impression on me. It taught me that you can’t ever abandon people.

Jaime, Lorenzo, and Paul had a big impact on me because they stuck with my family during that difficult time. Having gone through all that showed me how important it is to stand by people no matter how hard life gets for them.

But Jaime, Lorenzo, and Paul never judged us. They always believed in us. “You are not what they say about you,” they kept insisting. “You can accomplish so much your life.” We were just kids back then!

I thank God that they did believe in us. Their encouragement gave us more self-confidence and really made us stronger. Now things are very different than when I was 14. I have my own strength now. So that’s why I never want other people be all alone. We don’t have much, but we have what we need to live and we share it with other people. For me and my family, other people will always be a priority.

Today we are free. We know how lucky we are and we’re happy.

The pandemic has told us don’t go near other people. No visits, no gatherings. Even so, we are figuring out how to be attentive to other people. How to take care of those who are near us. How not to take appearances for granted. The pandemic has helped us find new ways to create bonds with people.

This is the most important thing we are learning now. The pandemic has made us cut back on the amount of time we can spend with people, but not how deeply we interact with them. When all this is over we’ll be able to say, “We were not alone” in Guatemala during lockdown.

More on ATD in Guatemala.

More on ATD Activists, people living in disadvantaged communities around the world who are taking their own steps to overcome poverty.