Skip to content
Home > At the United Nations > Javier Pérez de Cuellar, Joseph Wresinski: in the name of the human person

Javier Pérez de Cuellar, Joseph Wresinski: in the name of the human person 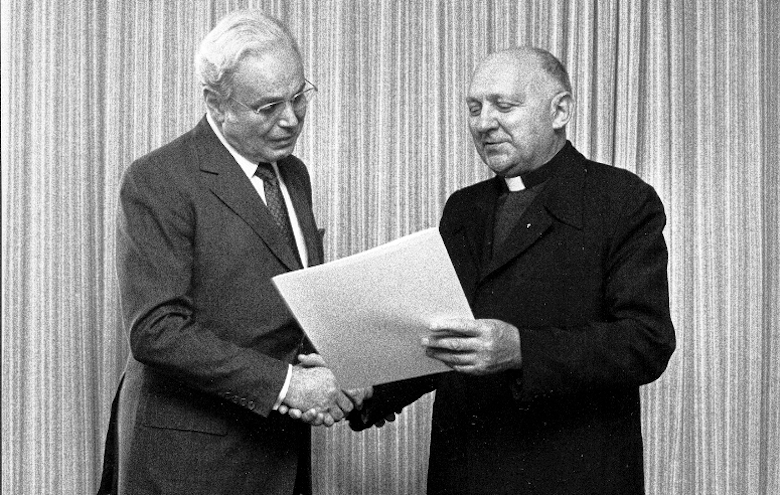 At a time when the international community is paying tribute to the fifth Secretary-General of the United Nations, Mr Javier Pérez de Cuellar, who died on 4 March 2020, it is worth mentioning the links between this statesman, tireless builder of peace, and Joseph Wresinski, founder of the ATD Fourth World Movement. A deep friendship and mutual respect had been established between these two men, who came from such different backgrounds, but who shared the same ideals: peace and unity of the human race, respect for human rights, rejecting the fatality of poverty.

It was on 27 June 1984 that Joseph Wresinski was welcomed in New York, at the United Nations Headquarters, by its Secretary-General, to present him with the 232,500 signatures of the Appeal to Human Rights Defenders launched in Brussels on 15 May 1982.

Spokesman for the people of the poor, for the people of the Fourth World, Joseph Wresinski recognized himself in Perez de Cuellar’s ambition to achieve what he believed in: a United Nations that would be the United Nations of its peoples, and more particularly of the poorest among them. On this ground the two men found such a strong complementarity that it made Perez de Cuellar say that Joseph Wresinski was “his eyes and ears” in the world of poverty.

– Wherever you go, you have my support, because your movement represents the most destitute families fighting everywhere for the respect of human dignity.

Following this first meeting, Javier Pérez de Cuellar opened the doors of the UN Human Rights Centre in Geneva 1 to the ATD Fourth World Movement, for a long road that led to the recognition of extreme poverty as a violation of human rights, and culminated in 2012 in the adoption of the “Guiding Principles on Extreme Poverty and Human Rights”.

The second meeting between the two men, on 13 April 1987, focused on the difficulties of both United Nations institutions and States in reaching the poorest, or as the Sustainable Development Goals now say, in leaving no one behind.

For the first gathering of human rights defenders on 17 October 1987 in Paris, the UN Secretary-General addressed this message:

“Over the last ten years, the activities carried out by the United Nations to ensure the promotion and respect of Human Rights have undergone remarkable development. At the same time, we have become increasingly aware of the reality of the interdependence and indivisibility of Human Rights. We know today that progress must be sought on all fronts and that we cannot put one aspect of the fundamental dignity of any man before another.

“Over time, we have begun to better appreciate the plight of the poorest among us, whether in developed or developing societies. Endemic poverty and its ruthless spiral deprives the poorest not only of the most essential means of subsistence, such as food, shelter and care, but also of intellectual, cultural and spiritual assets, such as education, which are equally indispensable for human fulfilment. Moreover, extreme poverty can lead to misperceptions about the rights to respect for physical integrity, equal protection under the law and public participation in decision-making of the community, which are set out in civil and political rights”.

On 17 April 1989, while in France, the Secretary-General of the United Nations came to visit the grave of Joseph Wresisnki in Méry-sur-Oise. Then in Paris, on the slab commemorating the victims of poverty. He said these words:

– “Wherever men are condemned to live in extreme poverty, human rights are violated. Uniting to uphold them is a sacred duty 2.”

“As Secretary-General of the United Nations and above all as a human being, I read these words of Father Wresinski with deep emotion. This inscription permanently inspires our efforts to overcome poverty. I am a representative of the United Nations, the peace organization. But I do not believe that peace is just the absence of war. Peace is much more than that. We cannot talk about peace as long as there is extreme poverty in the world. That is why I want to co-operate with all the friends of Father Wresinski, whom I had the great honour and pleasure of meeting personally twice in New York.

“I believe that we must help the whole world to address the poverty, so painful, from which millions of human beings suffer. I come from a country where there is a lot of poverty. So I have a very special understanding of the people who need to be helped by the international community as a whole. We live in a world where interdependence is the key word. We depend on each other. In this respect, we are witnessing here a ceremony that is both very simple and of very profound significance, bringing together men and women from all walks of life.

“As for me, I do not have any substantive or even political power. The United Nations depends on the governments of the Member States. But I have moral strength. This strength I place at the service of this cause for which Father Wresinski was for so long the spokesperson and for which, after his death, he remains the spokesperson.”

At the end of his term in office, on 31 December 1991, Javier Pérez de Cuellar maintained the bond he created with ATD Fourth World. He accepted to chair the International Committee for October 17 and remained an honorary member until his death. This committee was created to obtain that 17 October be proclaimed by the United Nations as “International Day for the Eradication of Extreme Poverty“. On 17 October 1992, Javier Pérez de Cuellar made an appeal to this effect:

“Three years ago, on this square, I said that we cannot talk about peace while there is extreme poverty in the world. I am therefore convinced that this Day is indispensable. We need an annual meeting with the poorest who, along with Father Wresisnki, say their refusal of poverty, a refusal that we want to share. We need an annual meeting to be silent together in the face of the misfortune that poverty generates and to renew our commitment to build a world of peace.

“A great love is never kept to itself,” Father Wresisnki used to say. Today we are witnesses to this. The families in great poverty and their friends who, for five years now, have been marking 17 October, are offering this Day to the peoples of the United Nations, born among the victims of extreme poverty. Together we can give a sign of hope to all those in the world who are subjected to contempt, fear and poverty. In response to this expectation, as Honorary Chairman of the Committee for the Recognition of this Day, I should like to launch today, 17 October 1992, from this very square, an Appeal to the United Nations and its General Assembly to proclaim 17 October the International Day for the Eradication of Extreme Poverty.”

He was again at the side of ATD Fourth World in his functions as President of the World Commission on Culture and Development, within the framework of the International Decade for Cultural Development. Here too, he shared Joseph Wresinski’s conviction that culture is an indispensable tool in the fight against poverty and exclusion.

While receiving delegations from Bolivia and Peru in his country, he expressed his interest in the way in which the ATD Fourth World Movement was seeking to find its place in the Andean countries. Returning to his candidacy for the presidency of Peru, he confided to Eugen Brand and Marco Ugarte: “My life has been, even during my ten years as Secretary-General of the United Nations, an infinitely urgent, exciting and difficult research to unite, as Father Wresinski engraved it on the Slab. It is this search that binds me to your movement”.